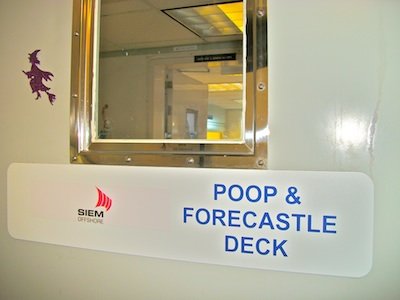 We are STILL off the western coast of Costa Rica.  Our coordinates are N 8o36 min, W 84o4 min. The island seen off of the port side of the JR is called Isla del Caño.  It is a biological reserve, so sea turtles, dolphins, and pods of whales are known to frequent the area.

Of archeological interest, large stone spheres are found all over the island with the largest weighing about two tons!  Archeologists don’t know the significance of these spheres, in a way like the famous heads on Easter Island, but the island may have been used as an ancient burial ground for coastal tribes.

Scientists at Work
We are still processing cores from Station 1…

In one of the cores, scientists discovered a crystal of pyrite, which indicates an iron rich environment. Some basalt, clay, and ash layers have also made an appearance in the last core, indicating volcanic activity.

Life on Board
One of the duties of the Education Officer onboard is to do interesting activities for students.  So, with this in mind, before the JR sailed I put out the call to all of the science teachers in San Diego County, where I teach science, to send me decorated Styrofoam cups.  Why?  The JOIDES staff had told me that I could attach the cups to the end of the drill rig and send them down to the bottom of the ocean.  The great pressures there will squeeze the air out of the Styrofoam and when the cups come back up, they are teeny tiny.  I did not expect the overwhelming response that I got!  Cups, and cups, and more cups!  It turns out that I had to separate all of the cups, poke a hole in the bottom to make sure no air bubbles got trapped inside, and stuff a paper towel in each one to make sure that they didn’t go back together.  Then, I had to put them into mesh laundry bags separated by each teacher’s classes.  Sitting on the floor in my office on the JR, I had many, many cups to process!  I also received a few styrofoam heads…we’ll see what happens!