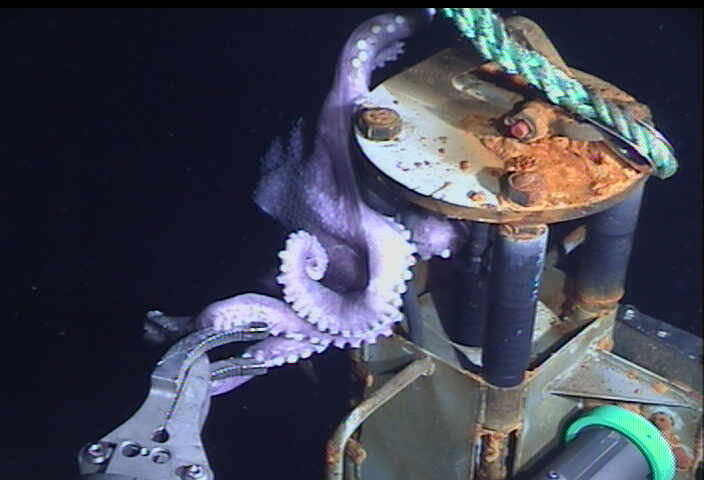 Since my last update there have been several developments…some good, some bad.  We successfully installed a new instrument string in hole 1301A, however when we tried to pull the string from 1301B the recovery line broke at the weak point under 6000 lbs of tension, leaving the instrument string stuck in the hole.

Fortunately when we went back to inspect 1301B the next day we saw that the plug was still in the CORK, meaning that the string is still seated and we can try to retrieve it with the JR (which can pull much harder than 6000 lbs) later.

My Alvin dive the other day also went exceedingly well!  We started at 1301B by attaching the string recovery system (the one that later broke) and downloading pressure data.  Our only problem here ws having to wait for clouds of silt to clear every time we tried to move the string recovery system.  Then we transited to 1026B (~1 km away) to recover 3 Osmosamplers and download temperature data from the thermistor string at the top of the CORK.  The dive was a PIT (Pilot in Training) dive, meaning that PIT Mike Skowronski did most of the work under the supervision of Expedition Leader Bruce Strickrott.  Mike did an amazing job!  It’s not easy to mate ODI connectors with the sub’s manipulator, so I was really impressed when he got it on the first try.  He also “shook hands” with an octopus hanging out at 1026B (see above).  I’m always impressed by what goes on during a dive, and this being my 4th in Alvin, never cease to be amazed at the technique and skill of the pilots.It was a long dive (we stayed late to get as much science done as possible), so I was exhausted by the time we got back to the surface.

Since my dive we’ve installed new Osmosamplers at 1026B, downloaded pressure data from 1026B (the one thing on my dive plan I couldn’t get to), and tested the microbio group’s pumps that pull formation water up the bio-line.  Today’s dive is checking the plug at 1301B, installing new Osmosamplers there, and pumping more water.

An interesting update on 1301B: we checked out the pressure data and it looks like the lowest interval of the hole (separated from above by a packer) that we’re monitoring has turned around and is now significantly overpressured!  The top part of the hole seems to still be sucking water, but now it appears that this cold “tongue” of water can’t reach the lower part of the hole!  So that means that the cementing kinida worked!  Very exciting.  We’re not sure what caused this turnaround, but we were surprised since this hole was never expected to have as high an overpressure as we’re seeing now!

Weather might be coming in tonight…we’re coming to the end of the cruise so stay tuned!