Shore Leave
I claim this core in the name of….. 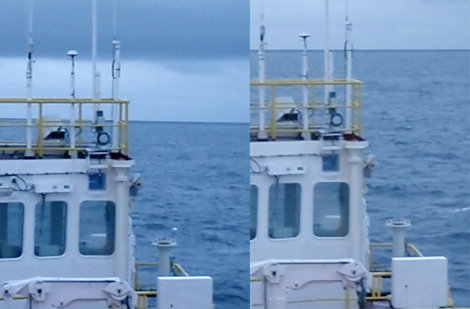 I am still trying to show you swell in a photo. These two images were taken just behind the bridge (foreground) looking forward by my video. They are 4 seconds apart and my camera is held steady with a railing for support. As you can see the horizon seems to be moving. That is the ship pitching forward and aft with the swell. We are nearly on station. Does anyone out there know where the biggest wind-waves on Earth are found? You guessed it, the Southern Ocean. If you haven’t heard of the Southern Ocean, look it up on the web. It is a new term that was applied only in the last 10 years or so. And it covers all oceans south of 60°S latitude. In the Southern Ocean the winds blow from the west and there are no continents to get in the way. The swell from those waves move up into the Pacific, Atlantic and Indian Ocean. We have a swell coming from the south right now that is causing some pretty serious rocking and rolling. Because we will be attached to a long string of steel when we start to core, we cannot actually work unless the swell is less than one meter. And we are very close to our station. The logistics required for a successful scientific sampling operation at sea are remarkable. I hope it calms down so that we are able to get to work.