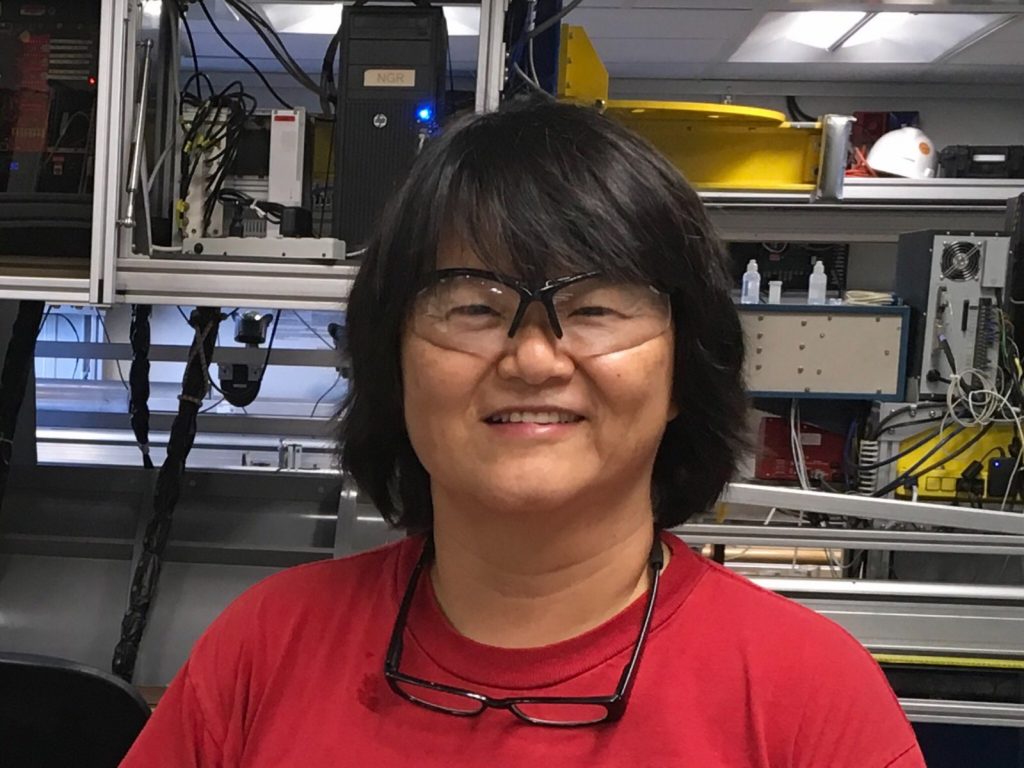 Technicians have a key role in the success of each expedition. Being a technician on a research vessel like the JOIDES Resolutionrequires a rare blend of skills. To start with all of the technicians on board have a very strong science background, many with Master Degrees in Geoscience. Consequently they have a good understanding of both the academic process of research and a strong interest and understanding of the subject matter. Generally laboratory technicians have to be creative problem solvers. Technicians need to be able to support scientists gather the data they require. This often requires lateral thinking and problem solving to apply processes to the unique situation that the specific research requires. Nowhere is this needed more than working on a ship where conditions for accurate measurements are challenging. In addition once having left port any adaptations have to be made using the materials and equipment available on the ship. 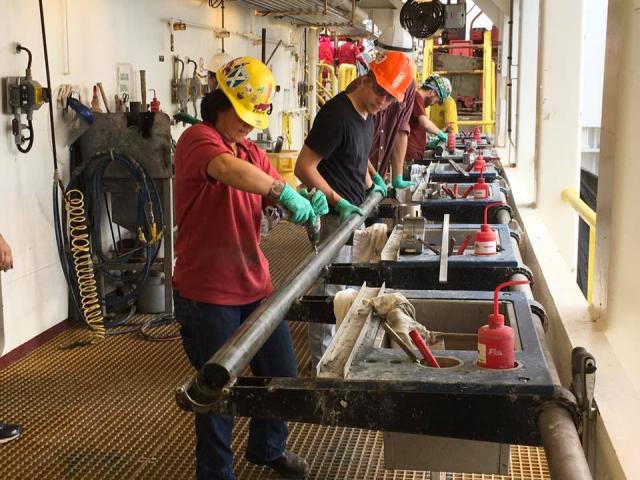 Assistant Laboratory Officer Chieh Peng started her job on board the ship some 25 years ago and is one of the longest standing members of staff to work on board. Her commitment and contribution to scientific research over the years has been immense.
Chieh graduated from Texas A & M University with a master’s degree in oceanography. During this time her interest moved from biological to chemical oceanography. In her thesis she studied coccolithophores and compared the accuracy of different chemical proxies. It was one of her thesis committee members who, on returning from an expedition on JOIDES Resolution, inspired Chieh to apply for a position as technician in the geochemistry laboratory on board. For Chieh the position was a dream come true – she could be involved in the research she loved whilst sailing around the world.
On board her initial role in the geochemistry laboratory was to maintain and calibrate equipment. Over the years she has seen increased automation and accuracy with much of the analytical equipment. Chieh also played a huge part in redesigning the laboratories during their refurbishment. Much of the equipment was also purpose made by the technicians for the specific requirements on board.
This week we are recovering core from an area where there is high productivity in the seawater. This means that there will be comparatively high amounts of organic matter in the core sediment. This presents a range of challenges for Chieh and the technical team. 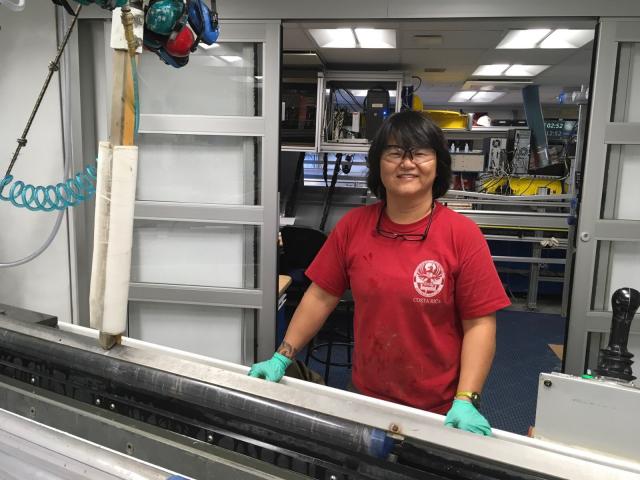 The first challenge to managing core high in organic matter is that it will undergo rapid decay once exposed to the more oxygen rich environment above the sea floor. This can set of a range of chemical changes within the core. To minimize and slow these processes the core is shrink wrapped as soon as possible to preserve the material.
There is a second challenge with this sediment rich in organic matter is that it sometimes contains a high gas content. As sediment is brought to the surface it undergoes a rapid pressure change. This change in pressure will cause gas inside the core to expand and the technicians drill along the core liner to release the pressure.
Thirdly, as organic matter breaks down without oxygen the poisonous gas hydrogen sulfide maybe formed. As well as smelling unpleasant this is actually toxic. For safety the technicians cutting the core into sections may have to wear respirators if the concentrations become too high. They also wear personal monitors to determine their exposure to the gas.
In her long service on board Chieh has had many memorable trips. She has particularly enjoyed trips to Antarctica where she has watched penguins, whales and stunning icebergs from the ship. She also names spectacular sunsets off the coast of Ghana due to the dust from the Sahara and time in Alaska as career highlights. Luckily for Chieh she does not suffer seasickness, as she was on board during perhaps what has been the ship’s worst storm.  It was at this time that mountainous seas broke a window in the bridge and the ship had to sail without the aid of its extensive electronic navigational equipment.
Chieh enjoys the sense of accomplishment with each successful expedition she supports. She enjoys being part of a team of technicians working together and is a very valued member of the JOIDES Resolution community. She has contributed a great deal in her 65 expeditions.
EXP363
10
Nov 2016
By Katie HalderUncategorizedLeave a comment