The role of the sedimentologists. 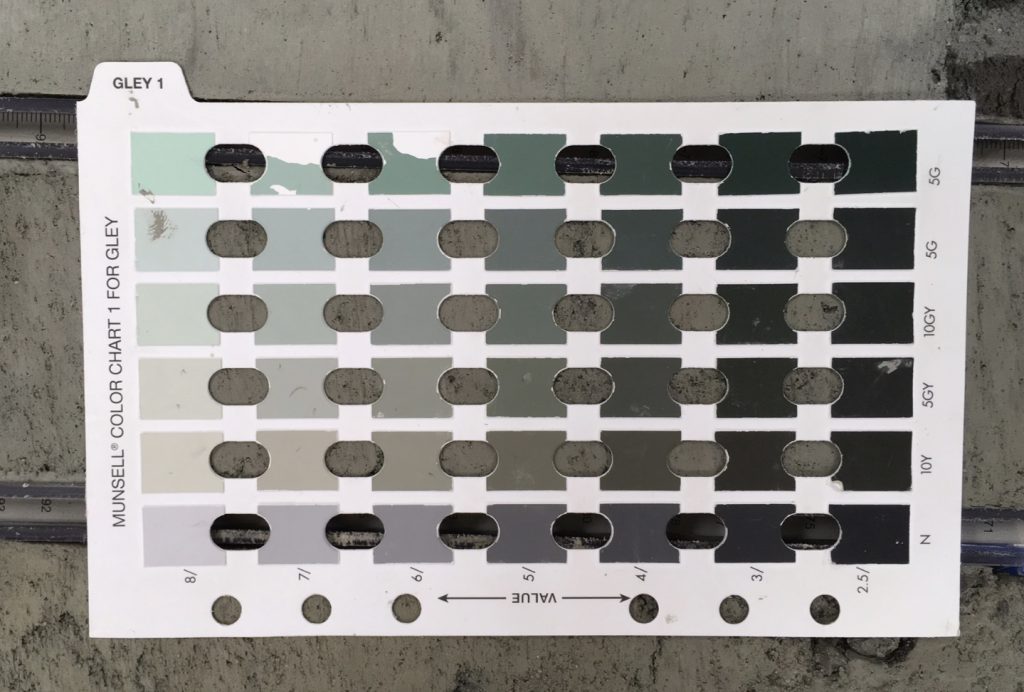 JOIDES Resolution drills under the ocean into the seafloor to bring up long cylinders of material called core. Sedimentologists describe this core.There are two teams of four sedimentologists sailing with expedition 363. The team working from midday to midnight comprises of Brad, Sam, Takuya and Jong-Hwa.

These teams are the first to look at the sediment after the core is cut long-wise by the technicians. One half is then used to take samples to work from while the other half is left untouched to be archived.  The working half is visually inspected and described. The sedimentologists do preliminary tests to determine the composition of the different layers of sediment and run the sediment through an array of machines that take very high-resolution photographs and determine the colour of the sediment. The scientists record visual descriptions of the core as well as quantitative measurements.

To help determine the composition of the sediment a toothpick is used to remove a small sample. This sample is mixed with a drop of water on a microscope slide. Using a microscope the presence of different types of microfossils are established. Additionally the presence of minerals can be determined. A microscope with two polarizing filters is used for this.

Once the minerals have been identified the scientists have to determine whether these were originally in the sediment when it was deposited or if they have formed as the sediment has slowly chemically changed. 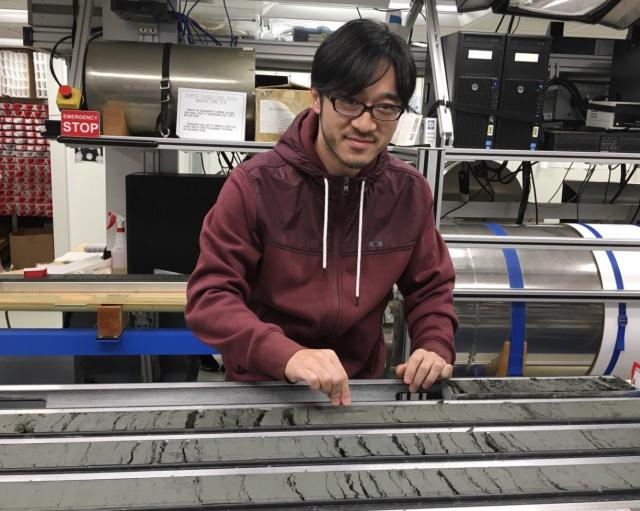 is sailing on board as one of the sedimentologists. His main interest in this expedition is to take foram samples back to Japan to enable him to determine the calcium to magnesium ratios of  their shells(tests). The ratio of calcium to magnesium reflects the water temperature at the time when the calcium carbonate shells were formed. Takuya will be able to determine past water temperatures from these data.

As a child Takuya’s father helped inspire his interest in geology, taking him out to collect fossils, and look at the natural world.  Now Takuya lives in Kanazawa, a city in Japan, with his wife and two children of 8 and 3 years old. He lives 20 minutes from the sea so enjoys going with his family to collect shells on the beach. He also enjoys time in the park with his children. He has found his experience on the boat a wonderful opportunity to meet people of different backgrounds both culturally and scientifically. When he returns to Japan he is looking forward to going to the naturally hot springs near where he lives with his family. He especially enjoys this in winter when you can sit in the warm water whilst the snow is falling around you. 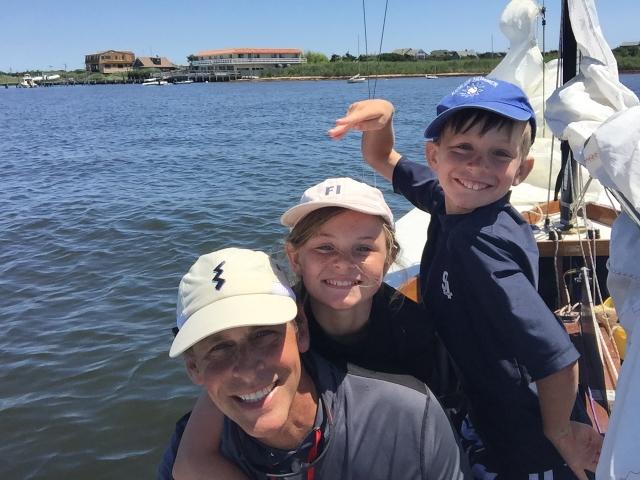 Brad Linsley is also sailing as a sedimentologist. He has a great deal of experience in this field having had a long interest in deep-sea sediments. Brad was a professor at a public university … teaching and  undertaking research for 16 years before more recently taking a post at Lamont Doherty Earth Observatory of Columbia University. There he runs the laboratory that specializes in the analysis of samples for stable isotopes.

An element can have two or more isotopes. This means that although the atoms might be the same chemically they can have a different mass due to containing a different number of neutral particles (called neutrons) within them. Although these atoms behave in a very similar way the relative concentrations of each isotope in a given environment may change over time due to physical and chemical processes. These changes in ratios are recorded in the structures built by species in these environments.  Careful analysis of these can reveal isotope ratios, which will enable scientists to determine past conditions.

Brad has two separate areas in which he has a specialized interest. During his PhD in Geology he became interested in deep sea sediments. During this time he also had an expedition on the JOIDES Resolution extracting samples of forams from the sediment at a higher resolution than previously analysed. Excitingly he documented a climatic cold event in the Western Pacific tropics that had been previously unrecorded. As well as having extensively researched the sediment records in the area of the Western Pacific Warm Pool he is interested in the high-resolution climate records recorded in the calcium carbonate structures of the slow growing massive corals. These corals can reach several hundreds of years in age. Their calcium carbonate structure geochemicaly record surface ocean conditions as they grow. This gives a near monthly resolved record of past conditions. Brad is concerned that as coral bleaching incidents occur some of these dome corals will be lost and if they deteriorate will be no longer be available as a climate record.  Find out more about this project at https://crowdfund.columbia.edu/project/3025<

Brad currently lives in Manhattan with his family. He has always loved the ocean and as a child was able to play by the sea. He enjoys going sailing with his wife and two children on their 19 foot sailing boat in the relatively sheltered waters of the Great South Bay near Fire Island, New York.