The Challenge of Massive Sills at Site 1546

Starting the Microbiology Hole, and a Birthday!
It’s a Sill!!! 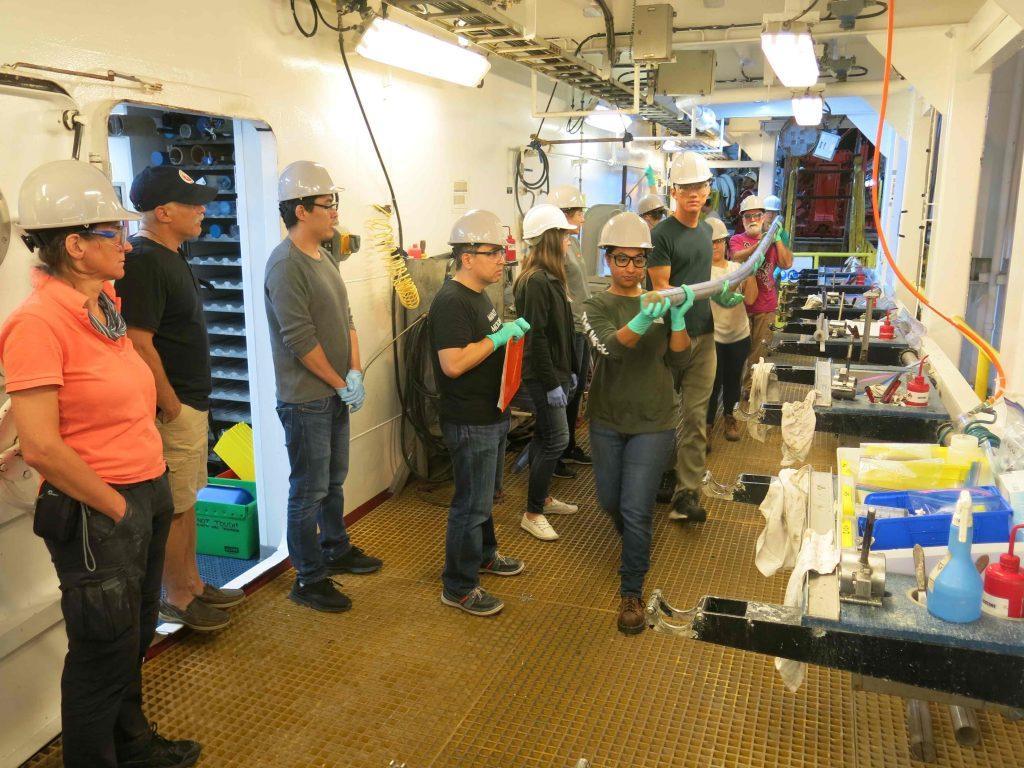 The last cores of our “cold sediment” standard site 1545 are coming up after midnight, from ca. 350 meters depth; further drilling at this site stops since the drilling tools become overheated and damaged as they try to recover increasingly uncooperative sediment. The thermal gradient of Hole B is entirely consistent with Hole A, and temperatures at this depth reach over 80°C and into the hyperthermophilic range: plenty of hot sediment for microbiology and biogeochemistry at the very limits of life. Here (top image), biogeochemist Verena Heuer, operations superintendent Kevin Griger, geochemist Ji-Hoon Kim, and microbiologists Yuki Morono and Nicolette Meyer [from left to right] are awaiting the fresh core, knowing — or fearing — that it might be the last good core in this hole.

By 9 a.m. in the morning, the JOIDES Resolution has moved ca. 1.5 km or 1 mile southeast, closer to Isla Tortuga. Here, massive basaltic sills have inserted themselves into the sediments at approx. 300 meters depth. The second site of this expedition will be drilled here, site U1546 in official IODP numbering.

A quick refresher: sills originate when migrating magma is no longer rising upwards towards the seafloor, but finds easily breakable sediment layers that allow for expansion sideways, in doing so the intruding sheet of lava is lifting and distorting the entire overlying sediment pile. The end result is a layer cake with baked marine sediment below and above the hot magmatic layer. Experts on the ship point out that the correct term for this rock is not “lava” (a term that is reserved for magmatic surface flow), but dolerite; thus “doleritic sills”. Followers of this blog have seen one of these doleritic sills already. Petrographic thin section analysis of the mineral matrix has shown that “Silly,” the much-debated 0.5-meter basalt layer recovered near the bottom of hole A, is a true sill — almost certainly the outermost end of a thicker sill that is extending northwards.

Now, trigger warning: 0.5 m will not do it at the new site. Here is a photo of the edge of an ancient Jurassic-age sill from South Africa that was originally buried in marine sediments, but has been uplifted by powerful tectonic forces underneath South Africa, and subsequently uncovered by wind and weather. The scale bar is correct, 100 meters. The entire oval-shaped sill can be admired in full size, more than 10 km across, only by airplane. [For more info on this amazing formation, see the field study by Galerne et al. 2010 in Geosphere, doi: 10.1130/GES00500.1]. The chosen sill sitting here in Guaymas Basin at 300 m sediment depth will (hopefully) not be as massive; estimates based on the seismic images are in the 30-35 meter range. But this is enough to give any drilling crew pause, and the roughest drilling tool, RCB or rotary core barrel, will be needed at some point.

Of course, this is the exciting stuff of IODP lore: Not just mud but hard rock! Entire expeditions have been thrown at just one hole of ocean crust… not too sure what to think of that.

This blog post first appeared on Oct. 4 on my daily blog of EXP385. Make sure to go to expedition385.wordpress.com to read the latest updates of this expedition!