Starting the Microbiology Hole, and a Birthday!

Towards the Guaymas Basin Depth Record, But No Rush
The Challenge of Massive Sills at Site 1546 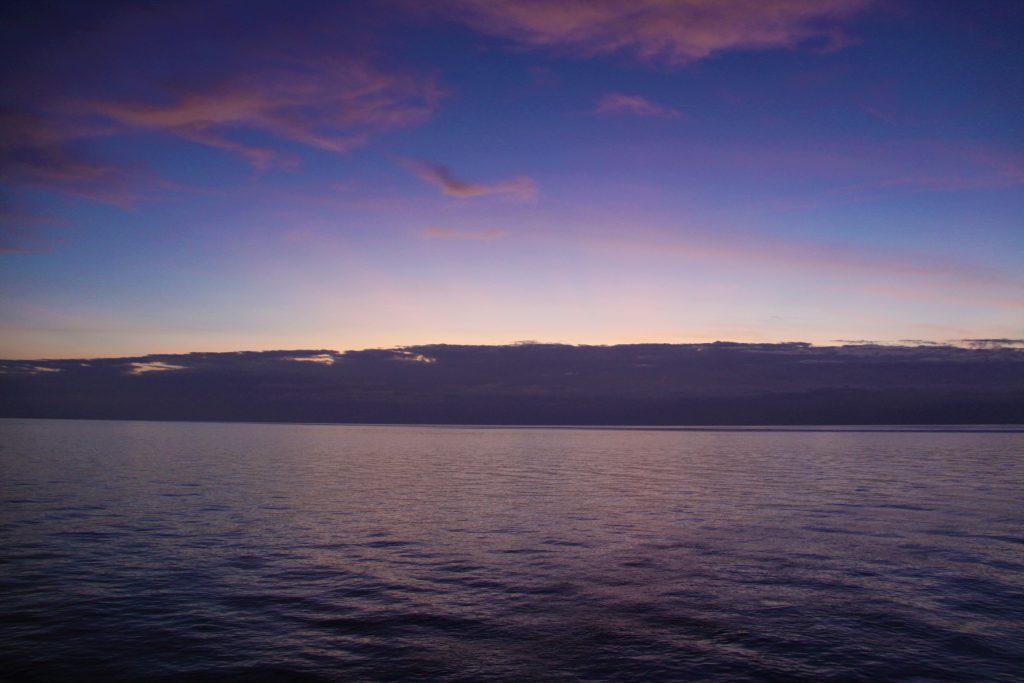 October on the JR starts with the remnants of tropical storm Narda moving in from the south and appearing here on the horizon, photographed by early bird Kevin Griger (top). During the day whitecaps and some swell are building up, but for those who come from rougher latitudes, the weather seems so consistently nice and pleasant! Baja California is having an effect.

The new hole B got underway in the small hours of the night and has been awaited by the microbiology and biogeochemistry crew. After many days of testing procedures in the lab, estimating the time demands of sample processing, and going through many iterations of revising sample codes and schemes, the time has come to put all this into action. Here, microbiologist Virginia Edgcomb (WHOI) is using a large clipboard with core maps for checking the sample codes and centimeter sections that are marked with red marker pens on the fresh core on the catwalk. Once everything is confirmed, the technicians are cutting 5 to 20 cm long pieces, a.k.a. Whole Round Cores or WRCs for short, for the members of the science party and their shore-based collaborators.

Immediately after cutting the first core sections, organic geochemist Jeanine Ash from Rice University in Houston is taking syringe samples for gas analyses from the freshly cut sediment interfaces. Gases such as hydrogen or methane are highly volatile and need to be captured immediately. Monitoring gas composition and concentration is an important safety task, as seen at the bottom of hole A where the alkane concentrations were getting dangerously high. Jeanine’s scientific specialty is the isotopic composition of methane — not just the familiar stable isotope 13C signature but its combination with different deuterium signatures, which is diagnostic for different origins and synthetic pathways of methane building blocks.

Core processing is halted for half an hour to celebrate the first of eight birthdays onboard: Lucie Pastor from IFREMER, in the pink T-shirt. The galley crew has baked a sumptuous chocolate cake, which disappears faster than a methane hydrate at room temperature. Everyone who is present at this early hour [more or less, the midnight-to-noon nightshift] is posing for the traditional birthday group photo.

Lucie was lured to Guaymas Basin and on this ship because of her biogeochemical interest in one the most intricate elements, sulfur, and its manifold isotopes that are enriched or depleted during abiotic or microbiological reactions. Once people graduate to sulfur, they no longer want to work with other elements, or regard them as subsidiary.

Soon after, serious business is conducted upstairs in the core lab. It has turned out that the chunks of rock recovered near the bottom of hole A were not just calcite; the bulk of it was volcanic. So, is it a sill, an emplaced layer of magmatic basalt that has intruded into the sediment and spread out sideways ?  Sills are usually many meters thick, if not more; the Palisades on the Hudson River northwest of NYC are one truly massive sill. But this one is barely half a meter thick and the XCB core has punched right through it. For now, we call it “Silly”.

Sampling schemes [marked by small paper flags on toothpicks] are discussed by interested parties and shipboard colleagues who do not necessarily want a sample but offer their opinions regardless. From left to right, Martine Buatier, sample curator Brittney Martinez [with helmet], palaeomagnetologist Myriam Kars, Kathy Marsaglia [strangely attracted to volcanic rock…], Tobias and Dan. The latter two, Brittney and myself form the Sample Allocation Committee, one of IODPs innumerable committees, and have to decide on the final sampling scheme. Caution prevails; instead of grinding everything up or going for other destructive procedures, thin sections will be made first.

This blog post first appeared on Oct. 1 on my daily blog of EXP385. Make sure to go to expedition385.wordpress.com to read the latest updates of this expedition!