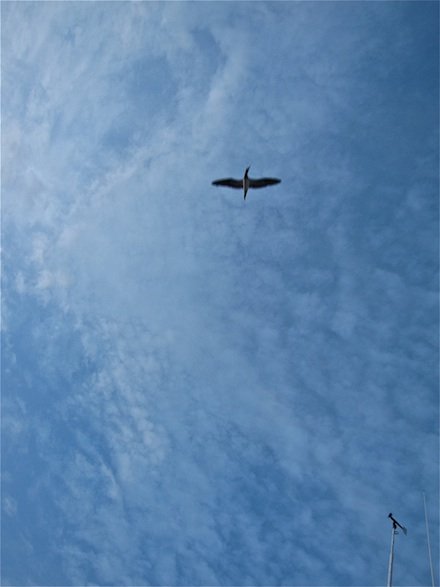 Scientists at Work
Everyone is still working hard, and we continue to get “Core on Deck!” but coring has taken a turn for the worse!  This morning, I have never seen a group of scientists so elated!

Cheering crowds of scientists have dwindled to glum-faced scientists as core after core comes in with just a bit of smelly detritus in the core-catcher and a few gobbets in part of the plastic sleeve.  Disappointment is clear on all of the faces and postures.

They try to make each other feel better by saying things like, “Well, you have to get through this tough junk to get to where we want to core,” and “Remember the last hole, we finally got through the tough part.” A few come around and ask for the leftovers…

Our target depth is 500 meters below sea floor (mbsf) at this site, and we have a long way to go…

Life on Board
Among the many birds that frequent the JR, there is a very handsome bird that shares this space on the ocean. They often come out to the ship in pairs, fly around awhile, dive a bit, then fly off back toward the mainland.

I did a bit of searching, and found that they are called “Brown Boobies,” a name not nearly as interesting as the famous Galapagos bird, the Blue-footed Booby.  Their wingspan can be up to almost five feet, and the females are generally slightly larger than the males.  They are known as “spectacular divers,” plunging into the ocean at high speed to catch fish or squid, which we have in abundance around the ship. I found this free-use picture on an informational site about seabirds of Central America.

From the subduction zone on the toe of the Caribbean plate…