The Core Report
The Grinder 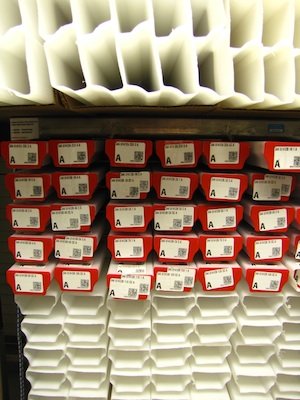 Scientists at Work
We are still having issues with bringing the core up – for unknown reasons, we get some chunks of sediments in the core catcher (the tip), but the rest of the plastic core sleeve is empty – well, full of seawater. We don’t have a camera down under the sea floor, so it is impossible to find out what is going on, but some think that possibly the sediments are very loose (unconsolidated) and are getting washed out when they bring up the core from below the sea floor.  They also think that the sediments may be disturbed by gas hydrates (which don’t smell very good!).

The drillers have successfully drilled down to about 300 meters below sea floor (mbsf), and our goal is to get to 500 mbsf.  We’ll see what happens! Nannofossils and radiolarians indicate a Late Miocene age in the sediments found in the core catcher.

Even though they don’t have new core to pore over, everyone is still busy running tests and experiments on the cores we have already brought up. Our microscope experts are still looking at microfossils, which include radiolarians and foraminifera, to help us determine the age of the sediments.

Micropaleontologists Ashley Burkett, foram expert, and Maria Sandoval Gutierrez, radiolarian expert, are still very busy separating and counting these tiny fossils. Each one of the tiny dots you see in the grid is a microfossil!  Scientists use a fine paintbrush to separate them into groups in the little numbered squares.

They are the shells of organisms that lived in the ocean millions of years ago and were buried in the sediments at the bottom of those ancient oceans.

Ashley is a Ph.D student at Indiana State Unversity, and Maria is a Ph.D student at the University of Lausanne in Switzerland. Asked what got them interested in the earth sciences, Ashley said she played with dinosaur toys in her sandbox when she was little, and Maria said that growing up with constant earthquakes in Costa Rica made her want to study more about them.

Life on Board
We had a scheduled “Security Drill” today, so when the alarms started going off, everyone gathered at their assigned station with life vests and helmets, like our other drills.  When my group’s leader, Second Mate John Powell, started talking about what to do if we get boarded by pirates, my ears perked up! Eh? He told us to give them our valuables without saying anything if they demand them, and then showed us where to go down in the lower decks to hole up until they leave.  (What does a pirate get if he eats too much spicy food?  Aaaaaart-burn!)

When I saw this view looking out my office window, I knew something was up! Geologists don’t tend to stand that close to each other unless they are fighting over a juicy piece of sediment core.

Pilot whales! A pod of beautiful black pilot whales was gliding through the ocean off our port side.

From Sediment Core Central, above the subduction zone…