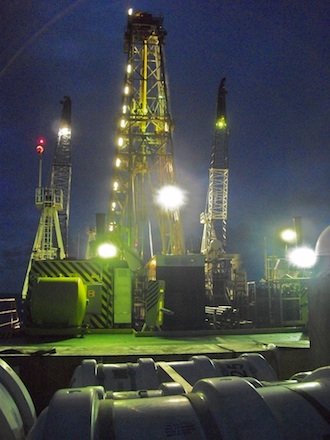 Did you know that there is actually a scientific instrument called a “Shatterbox” that is used to grind up hard materials into very fine powder?  Organic geochemist Ken Heydolph teaches at the University of Kiel and has been working at GEOMAR, Helmholtz Institute for Ocean Research, for ten years. He uses this $10,000 machine to grind up the brittle rocks from sediment cores into a very fine powder that has particles less than 10 microns in size! (For comparison, human hair ranges from about 20 to 200 microns in thickness).

He then mixes these particles in with a special type of powdered glass, melts them all together, pours them into tiny bowls, lets them cool, then puts them into an instrument called an XRD, or X-Ray Powder Diffractometer. This machine shoots X-rays into the glass bead containing the melted rock.

By measuring how the X-ray is deflected by the electrons inside the atoms of rock, a scientist can tell what kind of minerals were in the original sediment. This technique is often used in geology to identify minerals like feldspar, quartz, zeolites, clays, and pyroxene.

Core Update!
Only 1.24 meters of core was recovered by 8:00 this morning, dominated by microfossil ooze containing diatoms, sponge spicules, radiolarians, and foraminifers and a few feldspar crystals. Yesterday, the drill pipe had gotten stuck about 6 pm, and several hours of trying to free it (and 800 amps of torque!) to continue drilling were unsuccessful.  The decision was made to end coring and just send down the TC UCI (Triple Combo Ultrasonic Borehole Imager) for downhole logging to get information about the surrounding sediments as far as we got.

Even logging was not really successful due to the unstable nature of the hole, so at about 2:00 this afternoon, we ended attempts to log, as well. They have decided to move the ship about 20 meters to the northeast and try drilling another hole (U1412C) there down to about 300 meters below sea floor (mbsf).  All of this should happen in the next couple of days…scientists are starting to look at all of the data that we have already collected so far.

Life on Board
Taking a walk on the forecastle deck outside my office, I noticed the crane was operating and holding something over the side of the ship. I went to take a closer look, and there was a crewman on a platform hanging off the side, and several other crewmen on the deck managing the ropes.

I still couldn’t tell exactly what he was doing down there, so I watched awhile and finally figured out that he was repainting the pretty blue color on the bottom part of the ship!  I wouldn’t have guessed that they would repaint the ship while we were at sea!

From the Sediment Slums, above the subduction zone…