The Moho Mohawk (No coring = boring)

Art in the rock … What do you see in these thin sections ? EPISODE 1
The Magnetism of Rocks 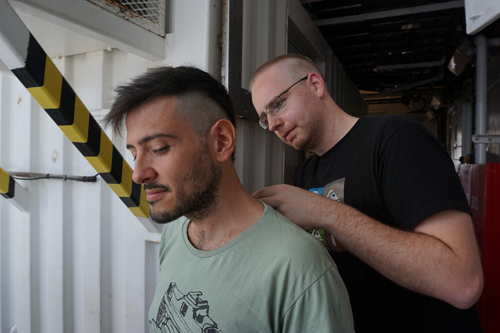 Over the transit, during our medical evacuation, the scientists on board were able to catch up on a bit of their work. Before we left the site the core was coming up on deck fast a furious. This break in fresh core allowed them to continue analyzing the core we had already collected. We even used the time for our first sampling party.

Because things were moving a little slower, some people found they had a little more time on their hands and so the Moho Mohawk was born.

It all started when Benoit and Susan decided to shave their heads. In total 10 people decided to participate in the Moho Mohawk event that spanned about three days.

Benoit and Olli, the barbers, set up shop on one of the decks and did their magic. Even Carlotta participated by having a little shaved off of one side. It was great fun.

Now we are back on site, continuing to work on the core previously collected and will hopefully have new core on deck in the coming days!
exp360expedition 360 moho mohawkmoho mohawk
06
Jan 2016
By Alejandra MartinezUncategorizedLeave a comment