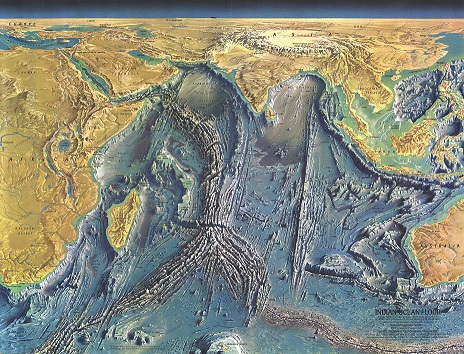 The Ninety-East Ridge (NER) is 5000 km long linear bathymetric feature striking more or less paralle to the 90°E meridian from south of Broken Ridge (at ~31°S), southwest of Australia, north to the Bay of Bengal, east of India. The ridge is about 2-3 km above the adjacent seafloor and its width varies from 150 to 250 km. It is the most prominent feature in the eastern Indian Ocean and separates the central Indian basin on the west from the Wharton basin on the east. The depths of the NER near our sites are about 2000 m below sea level, compared to over 4000 m below sea level at the Expedition 362 sites. Our drill sites are just to the east of this ridge. 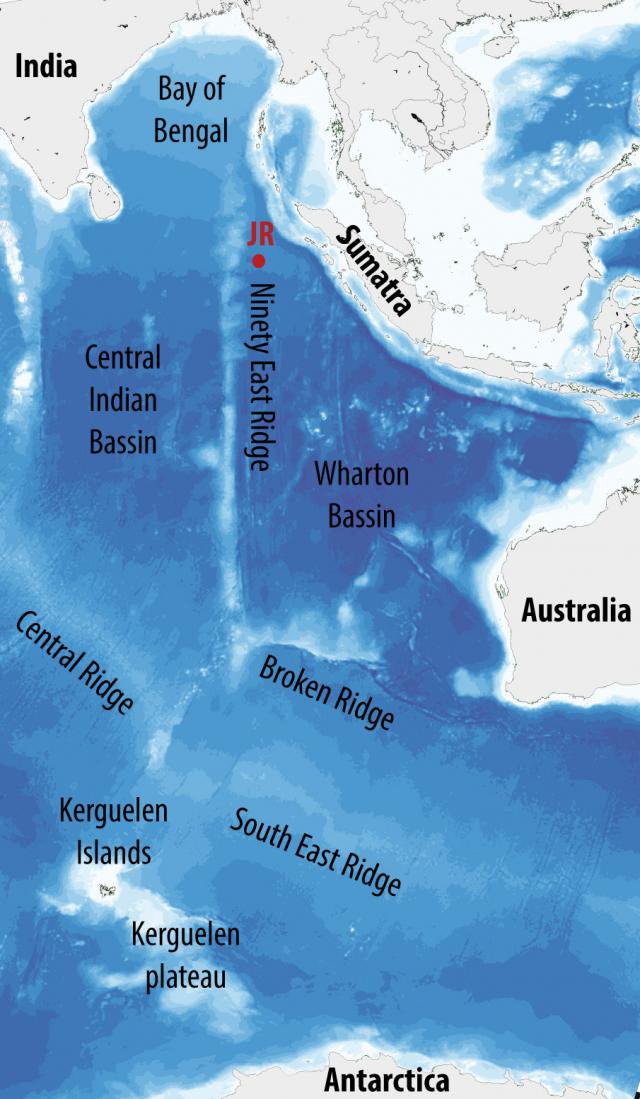 General view of the NER (modified from Delescluse, 2007)

The NER morphologically separates the western Bengal Fan from the eastern Nicobar Fan. At the coring sites of Expedition 362, the NER lies at 1000-2000 m above the present day seafloor on either site of the ridge. Volcanic materials that constitue the ridge are overlain by 100 to 300 m of sediment that have accumulated since the ridge formed. As opposed to the Bengal-Nicobar fan sediments that accumulate in the deepest part of the seafloor, the sediment recorded on the ridge are mostly pelagic (sediments from the water column rather than sediments transported by deeepwater flows) and include many ash layers from volcanic eruptions. The rate of sediment build up here are much lower than where we are drilling on the deeper ocean floor. The ridge has been drilled on several previsous IODP Expeditions in 1972, 1988 and 2014 (source : DSDP Leg 22, ODP Leg 121 and IODP Exp. 353).

A common question about the ridge is: how was the NER formed?

Several models have been put forward for the origin of the NER. However, it is widely belevied that the NER is a volcanic trace due to a hotpsot. It is commonly assumed that hotspots are fed by a hot mantle plume rising from deep within the Earth, maybe close to the core-mantle boundary, although there is a debate how deep these plumes may originate and maybe other potential sources of these volcanoes. Hotspots can generate volcanoes in the middle of plates, such as the Hawaiian volcano-seamount chain, or plate boundaries, such as Iceland forming at the Mid Atlantic Ridge of the North Atlantic. The hotspot model envisages that the plume is fixed relative to the tectonic plates moving overhead producing a trail of volcanic islands and older submerged volcanoes.

How hotspot made volcanoes

Just above the hotspot, a volcanic island is created. As the plate drifts over the hotspot, the first volcano is left and a new island appears with a new volcano. The age of the islands therefore increases away from the hotspot as the plate moves. As the island age, they sink by little as they gradually cool after volcanic formation and because they are no longer fed by the hot plume.

For the NER, it has been proposed that the ridge represents a trace of the Kerguelen hotspot. This hotspot has formed a large plateau on the seafloor in the southern Indian Ocean, north of Antartica. The drilling results on the NER have shown that the rocks of the ridge get gradually younger from north to south. The ridge is about 40 million years old in the south and about 80 million years old in the north. Close to the drill sites of Expedition 362, the ridge is about 60-80 million years old. Furthermore, the ridge has indeed been sinking since it formed-some of the evidence for this is shells that lived in shallow dater depths (less than about 150 m) found in the sediments on the ridge from the ocean drilling expeditions that are now located where the ridge is more than 2000 m below sea level (deep!).