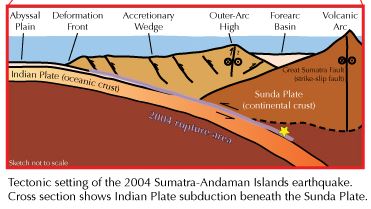 What is a subduction zone?

The Earth’s surface is divided into plates which have their own movement. A convergent boundary is when two plates are going towards each other. At the place where they met, one plate moves beneath another and is forced to go back into the mantle (or what geologists call the “asthenosphere” below the plates). It is what geologists called a “subduction zone”.

During subduction, an oceanic plate is thrust below another tectonic plate, which may be oceanic or continental. It’s always the plate which has the higher density which goes back to the asthenosphere. It is called the “subducting plate”. Because of their different composition in rocks, the oceanic plate is denser that the continental plate. And when two oceanic plates converge, the older is also the colder one which also makes it denser.

Subduction zones-are they the same?

The Sumatra subduction zone is an “accretionary margin”. The margin currently grows by adding sediments that have been scraped off from the oceanic plate. This builds the accretionary prism. Normally this occurs through a series of landward-dipping thrust faults with the youngest structure forming furthest away from the arc- see the diagram below. But in the North Sumatran accretionary prism, many of the faults actually dip in the opposite direction. This different style of faulting is thought to be caused by the properties of the sediments themselves and the same properties might affect how the big plate boundary fault moves and generates earthquakes. These are all questions being examined during this expedition.

Schematic carton of an accretionary prism (modified from Clift and Vannucchi, 2004)

Why so much sediments on the Indian Plate?

Geologists have determined that the sedimentary materials being incorporated into the North Sumatra subduction zone are related to the Bengal-Nicobar Fan system, which originates more than 3000 km away from our drilling site! This fan is the largest submarine fan currently on the planet. This enormous sedimentary system originates from erosion of the Himalayan mountains. Rivers carry the eroded material to the coast. Most of the sediment (~80%) is deposited onshore and offshore quite close to the coastline. But a huge amount still makes its way along deep-sea canyons to the deep sea portion of the Indian and even Australian plate. A portion of that is then incorporated into the Sunda subduction zone margin and is transferred to a different tectonic plate (see the post “In the mud for Love”).

In many other subduction zones, including those that have been studied by drilling, the sediment at the trench is thinner. For example, it’s about 1 km offshore Japan at the Nankai Trough. But in some other subduction zones, particulary those were there is a large submarine fan like the Bengal-Nicobar fan, sediments can be as thick and even thicker. A subduction zone similar to Sumatra is the Makran located offshore Iran and Pakistan, where the sediments of the western Himalaya and Tibetan Plateau feed rivers including the Indus which feeds the Indus submarine fan. Sediments entering the Makran subduction zone are up to 7-8 km thick and this forms probably the widest and largest accretionary prism in the world today!

Not all subduction zones are fed by large amounts of sediments. During the late 1980s and 1990s, seismic surveys and drilling by the Deep Sea Drilling Project (DSDP) and Ocean Drilling Program (ODP) revealed that sediment accretion was not a ubiquitous feature of subduction margins. In some cases, oceanic and trench sediments are subducted with fragments of rocks which are tectonically removed from the overriding plate. This is called an “erosional subduction zone”. Erosional subduction zones are common where there is topography on the subducting plate, e.g. seamounts, faults and ridges. These margins commonly have a small or no accretionary prism and the properties of the plate boundary fault could be quite different.

Schematic cartoon of an erosional prism (modified from Clift and Vannuchi, 2004)

The Tonga and Mariana subduction zones are good examples of erosive margins.

What makes the differences between accretionary and erosive margins?

Due to tectonic stresses as one tectonic plate rides over another, subduction zones are sources for great thrust earthquakes. The 2004 Mw 9.2 earthquake in the northern Sunda subduction zone as well as the Tohoku-Oki Mw 9.0 in 2011 in Japan showed unexpectedly shallow megathrust slip. In the case of North Sumatra, this slip was focused beneath the accretionary prism and the rupture extented a long distance from the island of Sumatra making the rupture very wide. It is quite unusual and not well explained by existing models.

Problems and questions like this are what have motivated our project. Expedition 362 aims to find out what happens when very thick and sand-rich sediments originating from the land are fed into a subduction zone-does it change the properties of the materials that then control how earthquakes are generated for example? And can we take what we learn here in Sumatra and then apply it to other subduction zones that may have the same type of input materials but with few historic earthquakes, suh as the Makran, to learn more about their hazard potential?

For my blog in French, it’s here!