The persistence of note taking

Meet the Scientist on Time Scavengers
Why did I become a scientist? 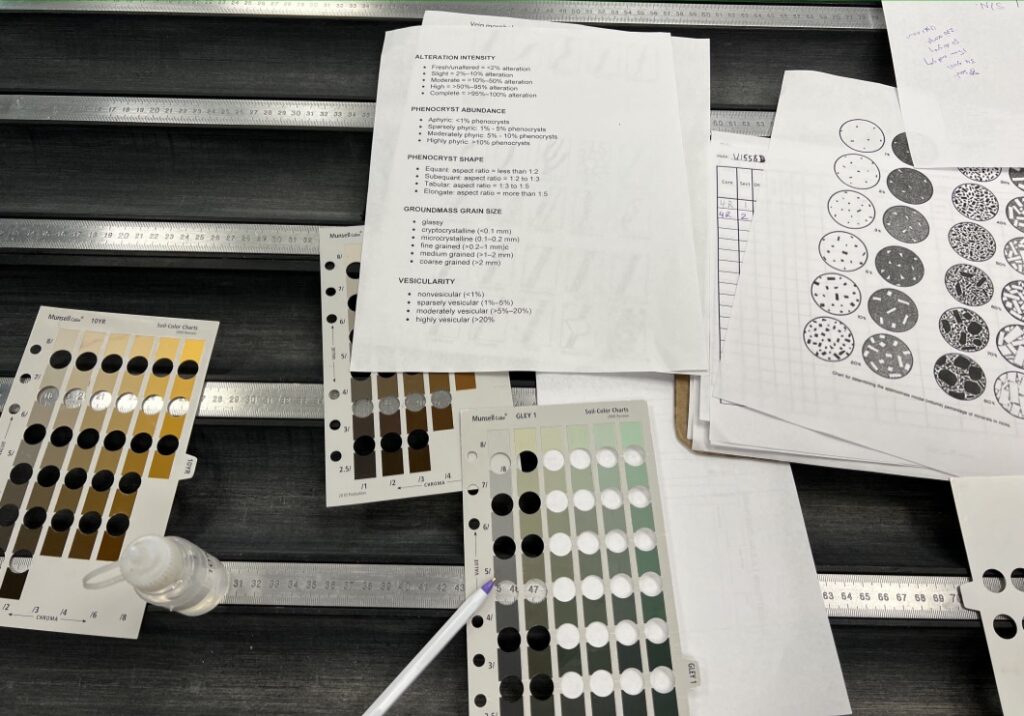 Notes are “a brief record of points or ideas written down as an aid to memory” according to the Oxford Language Dictionary. When I think of notes I remember back in school the various notebooks that my teachers would ask that we bring in to be prepared for class and I would spend hours in the book store deciding what notebook had the coolest cover. When I think of notes I think of the detailed notes my teachers would put up on the whiteboard for us to copy, which I now understand what they were doing in trying to teach me that skill. Notes are something of a skill that either someone does because they have learned it as a way to help them remember while for some it is a skill that takes more time to do and is distracting.

Whether you are of either camp, notes are an everyday thing you will find anywhere in a lab. You will find notes on post its, taped up messages in fume hoods, clipboards, and on loose scratch paper left at different stations. There are notes to act as reminders, notes as cautionary statements, notes as a checklist for how to prepare a sample, and notes as updates for the people who come on shift later in that day. Someone is always writing down notes as a way to communicate and if you are on a ship with a such an international crew, communication is key.

The biggest and most looked at set of notes we have on board is the whiteboard filled with the statistics of the current drilling operation. It updates us on how deep we are, when did the core come on deck, what number core is it, and some other pieces of information. It is also the first thing you see when you enter the core labs.

At the base of the white board lies the notebook which is the first place for these numbers to be recorded by a lab technician. Besides serving the purpose of updating everyone on the progress of drilling, it also prevents the co-chiefs, and engineering crew getting asked the same question repeatedly by everyone onboard.

Most times when note taking is strongly encouraged in school, the format of notes is limited to building hierarchical statements with bullet points or numbers, which does not always work for everyone. For instance, I am a visual person, when I write it is a matter of a stream of consciousness where there is no hierarchy but a web of ideas that I later realize are connected so I have to add arrows after. I add in diagrams and drawings of how things might fit which wouldn’t necessarily fit in a typical outline. The main point is that note taking is a record of points or ideas to aid memory but the missing keyword is that it should help your memory. Your notes do not have to make sense to anyone else and should not be judged by anyone. The only difference in note presentation is when other persons have to use it as well (like the white board notes). Those notes end up getting organized and worked on together so it becomes notes for everyone by everyone. Add in the different processes and systems that can happen in a laboratory and note taking becomes very important for the smooth transition between shifts.

While walking around the labs on the JOIDES Resolution I asked some of the scientists to share their notes with me to see how they take notes. 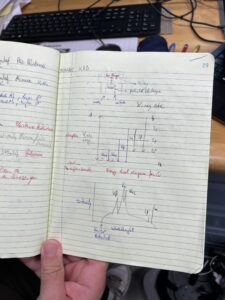 These are his notes about X-ray diffraction (XRD).It is a test we preform on our core samples. 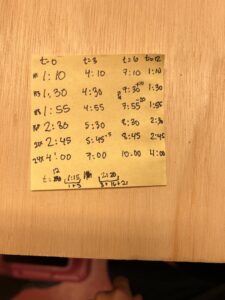 This post it note is for her to determine what times she would have to come down to the anaerobic chamber to collect one round of samples and prepare the next ones in a solution that makes it easier to isolate the virus from bacteria cells. 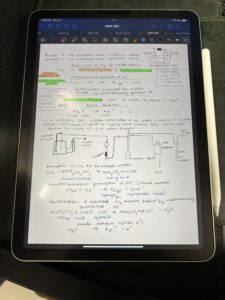 These are her notes about coulometry. Alex admitted to me that she prefers to take notes on her ipad instead of a paper notebook.

The post it notes lining the core halves are communicating measurements that need to be taken down for the archive half of the core. The main measurement here is identifying the different angles the rock pieces sides have.

When looking at these notes from the three different scientists there seems to be no rule to the organization of the notes. Even to the point that Paul was too shy to show me his notebook for the very likely possibility that I would not understand what was in it. Also, you might notice a common theme is drawing out your thoughts. Science is a visual field, and that is something I always tell my students to not feel bad if they don’t understand something they read the first time round. A lot of what is learnt in science education are things that the public have never see in detail so visuals are extremely useful. Even for us on the ship, we draw during conversations. Any extra white boards that are around the labs also get drawn on, it almost seems to be the first go-to way of discussing ideas with someone. For instance, below is a drawing found in the technician work room on the core labs deck.

This is a drawing of using a mesh netting to keep the magnetometer attached to the tow cable even if it somehow detaches. 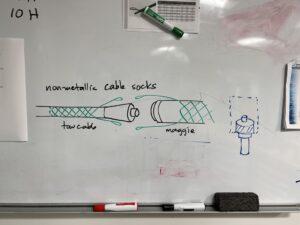 In summary, notes are a form of communication, making sense of your own thoughts, problem solving designs, and drawing out certain processes.