The Weight of Water 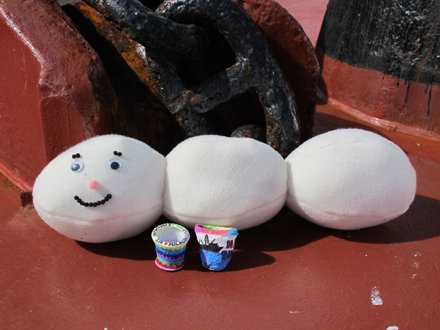 Water is heavy! When we’re standing at sea level, the atmosphere is pushing down on us, but we don’t feel it because our bodies are pushing back out equally. But if you’ve ever jumped into a pool and swum down to the bottom, you can feel that the water pushes on you more that the air did. That’s called pressure, and it gets higher and stronger the deeper you go.

At the surface, there’s just the atmosphere pushing on you, so it’s called 1 atmosphere of pressure. This is equal to about 14.7 pounds per square inch. A gallon of milk weighs about 8.6 pounds…think about all those milk jugs pushing down on you! When you go down into the ocean depths, the pressure increases by 1 atmosphere for every 10 meters. Right now, we’re drilling in water that’s about 4500 meters deep. That means the pressure is about 450 times what it is at the surface. That’s a lot of milk jugs!

So what can that pressure do? Here’s an example. We colored some Styrofoam cups here on the surface, then sent them down to the bottom of the ocean on our camera system that we use to look at the holes. When we brought them back up, boy were they squished! The Monterey Bay Aquarium made a video of their cup shrinking; check it out! Some things, like air and Styrofoam, compress (or squish) a lot, while other things, like steel and water, don’t. Engineers have to make sure that when they’re designing equipment that’s going to be used at the bottom of the sea, under great pressures, they use materials that won’t compress!