There be rocks down there!

Hurry up and wait….
Geek Blog, entry 1: Some of the science behind my Leg 352 participation…. 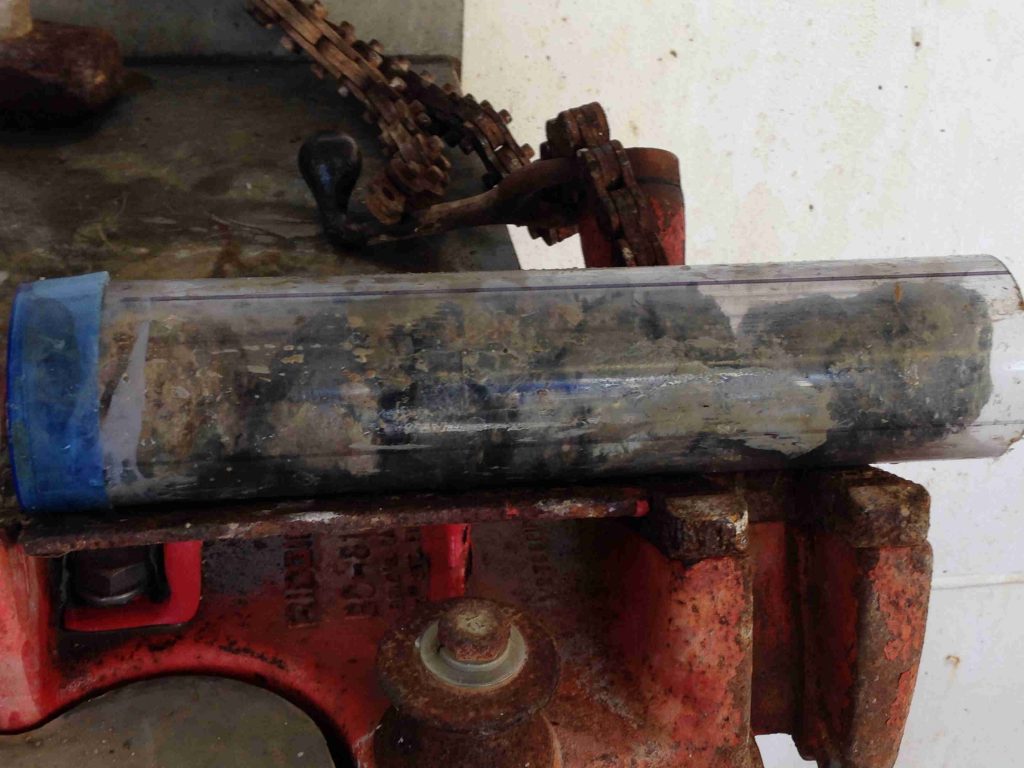 At the back end of my last shift, a core came up with very little recovery. This is always suspicious, because marine sediments core easily with recoveries better than 80% nearly all the time. We were all watching the IODP technical staff in their smooth and elaborate dance of core handoff (from the drillers to them, 10 meter length of 4 inch core carried by 5-6 technicians to the “catwalk” where it is segmented and capped to move into the lab for physical properties study), while at the same time one of our co-chief scientists was hanging over the shoulder of the tech with the “core catcher”, the metal end of the segment, which is handed over separately, and always contains something from the very bottom of the segment. Abruptly, our co-chief cut through the crowd, pulling out a hand lens, and, finding a sunbeam, was looking intently at something from the core catcher.

In seconds, we had all crowded around – he had a rock! The first “hard rock” of the expedition, from the bottom of the core, after two days and a couple hundred meters of drilling. It was remarkably fresh, with obvious and fresh mineral phenocrysts and a surprising lack of alteration by seawater.

While this event elicited some panic from the IODP curatorial staff on board, the mood of the scientific team changed dramatically, from “work to do” to giddy excitement. A handful of rock chips about to be washed away from the table where the core catcher was extracted became the subject of intent examination (fresh glass! What are the minerals?). We went back to the seismic imagery of the subsurface at this site and tried to pinpoint the depth of recovery, and the biostratigraphic work of our lone micropaleontologist (a graduate student who had no doubt applied to sail for the learning experience of it all) suddenly became a topic of great interest (Miocene? Eocene? Upper/Middle/Lower?) Decisions on next steps needed to be made, the co-chiefs consulted with the science team and IODP staff, and mealtime conversations comprised nothing else.

Ultimately, two more cores were taken and success was declared: we’d reached “basement” comprised of hard enough rock to be able to case a hole for diamond core drilling. The estimates on age of the rocks, while not ideal, were close enough to justify further drilling at the site. With this, we began a slow move to our second site, BON-1A, as per the drilling plan, to do the same thing, but in deeper water – over 1.5 km deeper, with the hope of sampling even older rock under all the sediment.