There Will Be Mud

The Other Twelve Hours
Stepping-Stones to the Future

We’ve arrived at site 4, and are making great progress, recovering about 40 metres of sediment an hour!

Though this site seems relatively easy to core, it presents two interesting challenges. First, the sediment so far has a VERY strong smell of rotten eggs. Secondly, we’re drilling right in the middle of the Carnarvon Basin, the most productive petroleum field in Australia. This makes things tricky.

Here’s a quick history lesson: before the JOIDES Resolution was a scientific drilling ship, it was actually an oil exploration vessel named Sedco/BP 471. It was repurposed for scientific use in 1985, and in 2009 it was totally rebuilt into the high-tech floating lab we know today. So it has a history with petroleum. 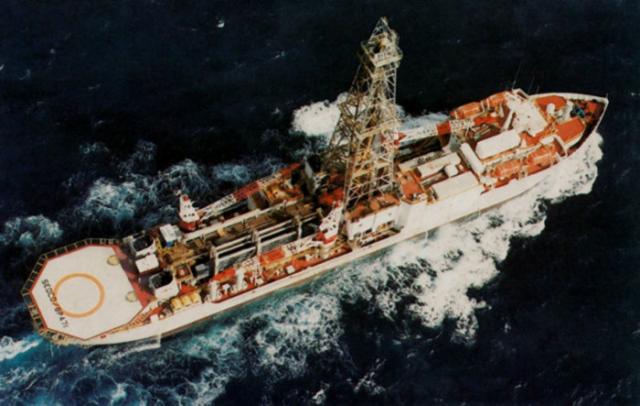 But it’s important to note that even though we’re in a petroleum-rich area, we are not looking for oil or gas. In fact, we REALLY don’t want to find oil or gas. Our rig is designed to pick up sediment, not to handle any sort of pressurised reservoir. So we take measures to avoid that sort of thing.

We’ll leave all that to our neighbors here

Long before the expedition set off, we used pre-existing data to plan our sites in areas with no known petroleum reservoirs. A major advantage of drilling in such a resource-rich area, is that it’s already been thoroughly analysed and mapped by previous surveyors. One of the most common ways to do this is with a “seismic survey”. By sending sonic waves through the sediment, and analyzing how the waves bounce back, surveyors can reveal the layers and features hidden below the seabed, without needing to do any digging. We study these seismic surveys to make sure we drill in useful and interesting sites, and avoid difficult or dangerous ones.

We even have the equipment to do seismic surveys ourselves, but we have to check for whales or dolphins first!

The gas reservoirs in this area also tend to be much deeper than we are drilling. For this site, we plan on drilling only slightly more than 1 kilometre, while the oil and gas wells nearby commonly reach depths of 4 or 5 kilometres. Even so, we constantly monitor the cores for hydrocarbon levels. Hydrocarbons are chemicals that make up fossil fuels like gas, oil, and coal, so if our sediments show high hydrocarbon levels, we need to drill somewhere else.

To test the sediments, our onboard geochemists take a small sample of each core, and heat it up in an oven to release any gas. Using a Gas Chromatograph (which separates and detects different chemicals in a sample), they test the levels of methane and ethane in the gas, and keep us all informed. We’re not expecting them to find very much! 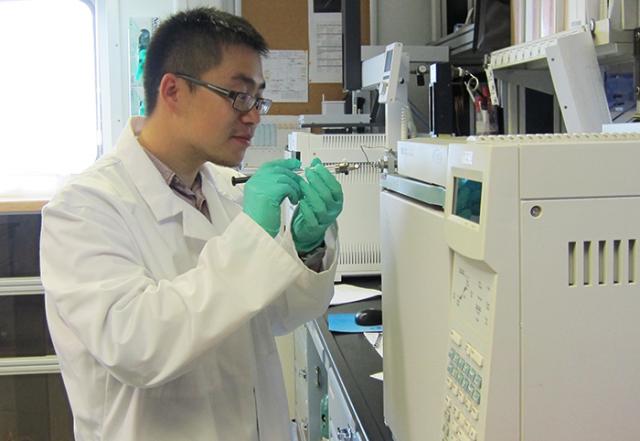 Yuxin injects a sample into the gas chromatograph

A gas which is more on our minds (and noses) at the moment is hydrogen sulphide, or rotten egg gas, which is currently permeating the laboratories. It’s formed when bacteria break down organic matter, so it’s very common in natural gas (and digestive gas). While pure methane and ethane are almost totally odourless, the average human can easily smell H2S at concentrations of less than 1 part per million. That’s even below the limit our sensors can detect! We have alarms to alert us when concentrations pass 10 ppm (which is still within safe working levels), but with the small amount we’re releasing from each core, we’re unlikely to get anywhere near that level. 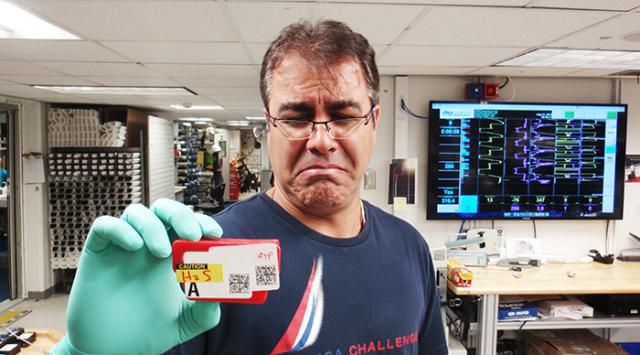 Generally, apart from keeping out of trouble, we’re not overly interested in all this fossil fuel business. Our mission is to investigate the history of climate, currents, and geological activity in the area. All this sediment might be worth nothing on the resource market, but it’s got incredible scientific value.

So times have changed for the old Sedco/BP 471. Nowadays we’re the only ship out here hoping we DON’T find oil!