To drill, or not to drill

Not all [hotspots] who wander are lost (Exp391 Science Objectives, Part 2)
What’s your *JOIDES* resolution? 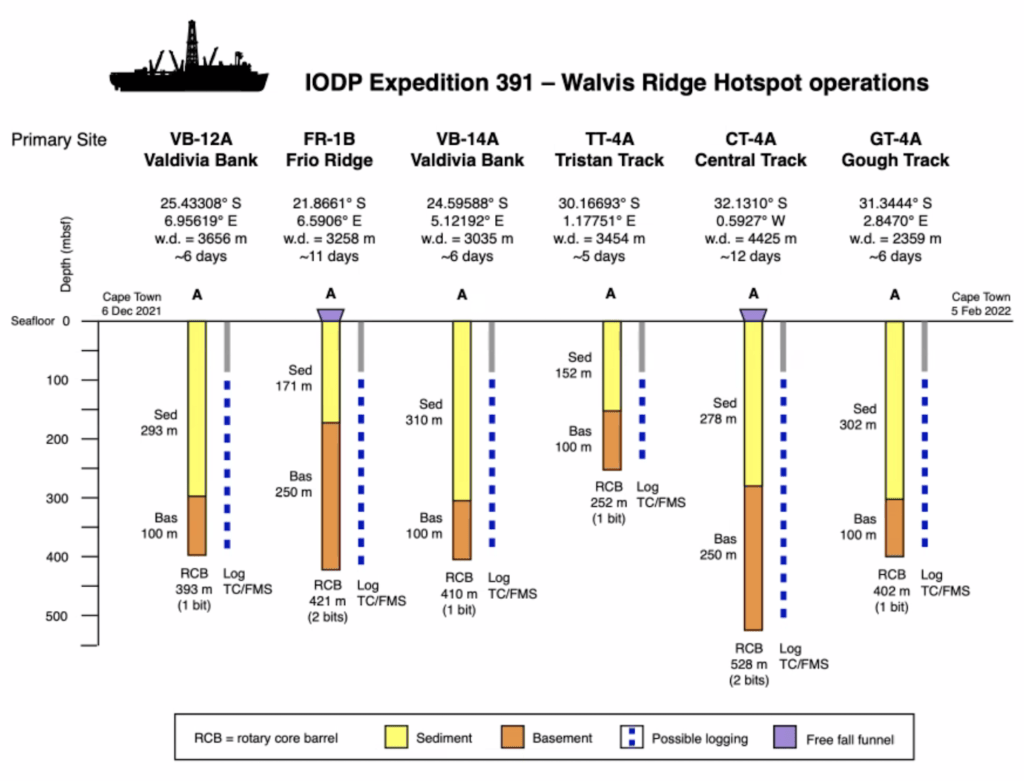 The definitive guide to the drill sites of Expedition 391

In the original plan of IODP Expedition 391, six primary drill sites were identified as locations to collect samples. Together, sediments and rocks from these six locations were to provide ample data to help scientists meet the objectives of the cruise. Our scientific goals are twofold: (1) to determine whether the volcanism of the Walvis Ridge hotspot track was influenced by one, two, or even three mantle plumes, and (2) to investigate whether evidence of true polar wander is preserved in the rocks of Walvis Ridge.

The story behind these six locations, and the order in which we were to reach them, is surprisingly fraught, with complications caused by territorial claims and even a solar eclipse. Now that our expedition has been delayed by more than two weeks, the story is even more complicated. It is no longer possible to reach all six sites in the time we have left. This means we need to make some sacrifices.

Over the past several days, the Expedition 391 science party has been meeting to discuss the benefits and disadvantages of each sampling location, to decide which sites are imperative to our objectives and which can be given up. The conversations have been based in science, and take into account several factors including the availability of usable preexisting data, maximizing recoverable core, and personal research projects.

This is a guide to each of the sites, in the order of the original plan to visit them. The descriptions are based on the original Expedition 391 Scientific Prospectus, as well as conversations with scientists in different fields of geoscience. By sharing this information with you, we are hoping to make our thinking transparent, and invite you to participate in the science with us as we do our best to decide where to sample.

VB-12A: This site is located on the southeast side of Valdivia Bank. It has a seafloor depth of 3667 meters below the surface. In this location, the sediment is 293 meters thick above the volcanic basement rock. The drilling plan for this site is to use just one bit, which will allow us to penetrate 100 m into the basement.

This site is preferred by our micropaleontologists because it has a thick layer of sediments, which means we will be able to find plenty of fossils that will allow us to determine the ages of the rock layers, and will also give us a more thorough record of paleoclimate changes over time. A thick layer of sediments is important also due to our drilling process. Since this expedition is focused primarily on lava flows, which produce hard igneous rock, we will be utilizing rotary core barrel (RCB) drilling. The thicker the sediment layer, the more likely it is that the lower sediments will be lithified, and therefore more likely to be recovered by the RCB process.

VB-12A is also the preferred site for paleomagnetists, who are here to interrogate rocks of the Walvis Ridge to calculate a precise paleolatitude of the mantle plume hotspot that formed the ridge. This paleolatitude can be compared to preexisting models of hotspot migration and true polar wander, to give more insight into the processes that led to paloelatitude shifts. This site is ideal for this aspect of the investigation because it formed ~85 million years ago, which is when a true polar wander event is hypothesized to have occurred.

FR-1B: This site is the northernmost site of the expedition, located in a region known as Frio Ridge. It has a seafloor depth of 3259 meters below the sea surface, and a sediment thickness of 171 m. With an age of ~100 million years, it is the oldest site. The original plan was for this to be a two-bit hole, allowing us to drill 250 m into the igneous basement.

The Frio Ridge site is scientifically interesting because it is the closest site to the Namibian continental shelf. For micropaleontologists, this means that there may be both marine and terrestrial inputs to the fossil record. For geochemists, the possible influence from continental sources provides an opportunity to learn more about the long term processes that determine mantle composition and behavior.

Previous data from this region indicate that, though the sediment package is relatively thin, it spans the greatest length of time. A wide age range in these sediments will allow scientists to develop a high-resolution interpretation of changes to ocean conditions and climate over time.

VB-14A: This site is located on the western side of the Valdivia Bank, with a seafloor depth of 3046 meters below the sea surface. The sediment layer is 310 m thick. This site is also a one-bit site, allowing for recovery of up to 100 m of igneous basement rocks.

Given that this site is also on Valdivia Bank, it is important to the story of the strange morphology of the Walvis Ridge. We know that a mantle plume was involved in its formation, but the story is complicated by the fact that it is not a “string of pearls” seamount chain like classic hotspot tracks.

Studying the paleomagnetism and the geochemistry of the rocks from this location will help decipher the elusive history of this unusual oceanic plateau. The more data we have, the more likely we will be able to determine the extent of interaction between the Mid-Atlantic Ridge and the mantle plume that formed the Walvis Ridge. This will also provide evidence to test the hypothesis that the ridge formed contemporaneously with a microplate, which would have affected volcanism in the region.

TT-4A: This site is part of what we refer to as the Tristan track, which is the chain of seamounts that stretches from the southern tip of Valdivia Bank to the Tristan da Cunha islands. The site has a seafloor depth of 3465 meters below the sea surface, and a sediment thickness of 152 m. We will also limit our drilling to one bit at this location, so we aim to recover 100 m of volcanic basement from this site.

Sampling the Tristan track is crucial to our goal of determining the degree to which the Walvis Ridge is geochemically zoned. The data from this site, along with data from CT-4A and GT-4A, will show how many distinct mantle plume sources contributed to the formation of the three seamount tracks in the south of the Walvis Ridge.

Geochemical analyses have already been carried out on samples dredged from the sea floor at several locations along the Tristan track. However, seafloor dredging is a comparatively imprecise method, as there is little control over sample selection. Drilling will allow us to collect data to determine how the geochemistry at one location has changed over time, which will provide valuable insight into the dynamic behavior of the plume or plumes that formed the Walvis Ridge.

CT-4A: This site is located in the central track, the chain of seamounts between the Tristan track and the Gough track. It is our youngest site, and with a seafloor depth of 4436 meters below the sea surface, it is also our deepest site. The sediment thickness at this location is 278 m. This is also intended to be a two-bit hole, allowing for drill penetration up to 250 m below the seafloor.

Samples from this location are considered by many to be the most important in answering the question of the mantle source that contributed to the formation of the Walvis Ridge. Preexisting data indicate that the Tristan track and the Gough track are geochemically distinct, which means that they come from two unique mantle sources. What we do not yet know is the origin of this central track. Was it formed by a third mantle plume in the region? Does it represent some sort of mixing between the Tristan plume source and the Gough plume source? Answering these questions will help scientists to develop more detailed models for overall mantle behavior.

This site is also important to paleomagnetists, as it formed around the same time as the bend in the Hawaii-Emperor Chain (read more about this here). Paleolatitude interpretations of the rocks at this site will help tell the story of true polar wander in the early Cenozoic.

GT-4A: This site is located along the Gough track, the chain of seamounts that spans the southern tip of the Valdivia Bank to Gough Island. It has a seafloor depth of 2370 meters below the sea surface, and a layer of sediments 302 m thick. As a one-bit hole, we plan to recover up to 100 m of igneous rock at this location.

Along with samples from TT-4A and CT-4A, rocks from this location will provide the data necessary to interpret the mantle plume behavior that resulted in the three chains of hotspot seamounts rather than just one track. As one end-member in geochemical story (with the Tristan track as the other end-member), comparative analyses will help us interpret the geologic history of the central track.

Several dredge samples were also collected from along the Gough track, meaning that geochemical data is available, though it lacks the high resolution that is provided by a drill core. This site is also the source of concern to our scientists interested in sediments, as seismic data indicate that faulting in the area caused sediments to slump. This means that the original order of deposition has been disturbed, which will complicate the interpretation of the layers.

Tune into our social media accounts to follow our journey and see which sites we decide to drill! 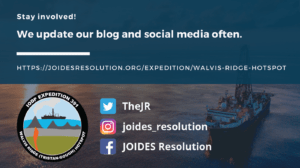