The best room on the ship
What is a subduction zone? 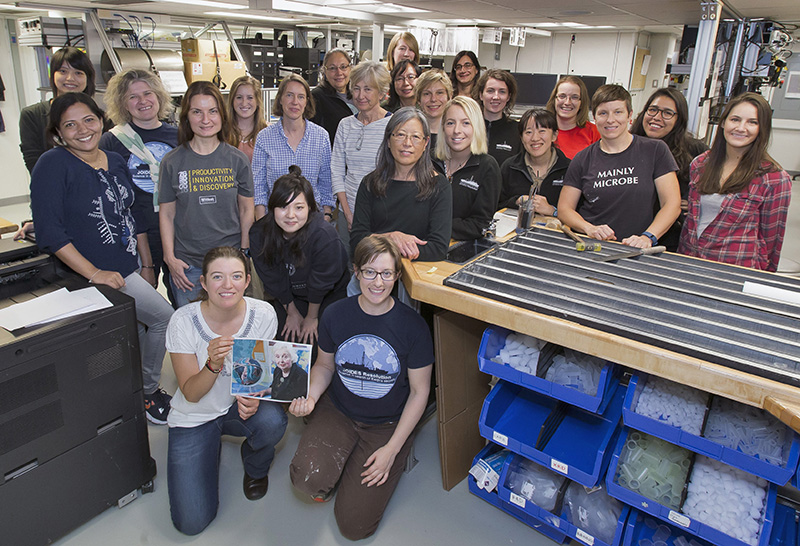 Think of the first time you saw a map of the world. It probably looked like colorful patches mostly connected to other colorful patches, with a vast scape of blue between the colorful areas.  Until the 1940s, that’s how many people imagined the ocean: “a uniform, featureless blue border for the continents.”*  These are the words of Marie Tharp, one of the people who created the first maps of the world’s oceans.  She passed away ten years ago today (23 August 2016), at the age of 86.  Her initial path to geology and oceanography was as non-linear as it is inspiring.  Her decades of dedication and curiosity set the foundation of the theory of plate tectonics and made it possible for us to do the work we’re doing today in geology and on this expedition.

Tharp was born in Michigan in 1920.  Her father was a soil surveyor for the United States Department of Agriculture, a job which moved the family frequently all over the US. “I guess I had map-making in my blood, though I hadn’t planned to follow in my father’s footsteps,” Marie wrote in an autobiographical chapter.  Instead, she followed an unusual path for women in her time.  In the 1940s, new opportunities opened to women while men went to fight in World War II.  In 1943, Tharp and about ten other women responded to a University of Michigan advertisement for women to study geology, with a promise of jobs in the petroleum industry.  After graduating, Tharp was still not quite satisfied with her work.  “Some of the girls I went to school with went into micropaleontological work and spent their time looking through microscopes.  That seemed tedious, so I went to the University of Tulsa and got a degree in math.”  Then, in 1948 she went to New York to look for new prospects.  She found her way to Columbia University, where she was hired to work with Maurice “Doc” Ewing, a geologist at the Lamont Geological Observatory (now the Lamont-Doherty Earth Observatory).  Soon she worked full time for graduate student Bruce Heezen, creating hand-drawn profiles of the seafloor from sounding technology developed for the Navy during the war.   (We still use sonar to map the seafloor.  On every expedition of the JR, when we’re in transit, we hear a little chirp every few minutes, sending sound waves through the water that bounce off the seafloor and come back to receivers on board. We send the data to a centralized location that continues to gather data about the seafloor. )

Tharp translated tends of thousands of depth measurements collected by several ships during the 1940s – 1960s.  From a criss-crossing web of ship’s tracks over the Atlantic, Tharp created “a hodgepodge of disjointed and disconnected profiles of sections of the North Atlantic floor”, which took her nearly two months to organize into a geographically meaningful arrangement.  When she did, she noticed a pattern in the location and shape of a prominent feature roughly in the middle of the Atlantic: “the only consistent match-up was a V-shaped indentation in the center of the profiles.”  Previous explorations had suggested submarine mountain chains, but Tharp noted that only the valley was continuous along the north-south axis of the long feature.  She interpreted this as a rift valley, like we see today from Syria to eastern Africa.  Heezen, whose lab she was working in, initially wrote off her work as impossible, related to the as-yet unsupported idea of continental drift.  He called it “girl talk”.

Unwilling to let go of what she thought was right, Tharp continued to search for more evidence of a rift valley.  “If there were such a thing as continental drift, it seemed logical that something like a mid-ocean rift valley might be involved.”  It would be a place where upwelling of material from beneath the crust would push the two sides of the valley apart.  She and Heezen adapted physiographic mapping techniques used on land for mapping the bottom of the ocean.  Increasingly precise sounding data, the advent of satellite positioning, and increasing numbers of research vessels improved the maps.  Another layer of data soon proved Tharp right about the rift valley.  Heezen and Ewing showed that earthquakes could trigger turbidity currents (slurries of sediment carried by turbulent water that flows as its own current along the ocean floor) and destroy cables on the seafloor.  Elevated interest in earthquake locations to determine safe cable-laying locations led to a map that showed earthquakes occurring along Tharp’s delineated “gully”.

They broadened their view to look at the global distribution of these oceanic ridge-sided valleys.  With the global earthquake maps layered on the light table, they noted the coincidence of shallow earthquakes and mid-ocean ridges, not just in the Atlantic but also in the Indian Ocean, the Gulf of Aden, the Arabian Sea, and the Red Sea.  They all matched up with the valleys, and the ocean ridges extended all around the world.  Amid both scorn and celebration at international scientific meetings, the evidence continued to expand.

Over the next decade, Heezen and Tharp overcame political, personal, and gender barriers to sail on research cruises, gather more data from all over the world, and even collaborate with Russian scientists amid Cold War political hostility.  The quality and detail of the maps improved alongside ocean exploration technology.  Their first major published maps were drawn by hand from the soundings and ship tracks, interpreted as well as possible in areas with no data.  “Like the cartographers of old, we put a large legend in the space where we had no data. I also wanted to include mermaids and shipwrecks, but Bruce [Heezen] would have none of it.”  By the end of the 1960s, the integrative theory of plate tectonics was coming together, in large part based on Tharp’s maps and the understanding that came with them.

Today on the JR, we’re in the eastern Indian Ocean, and the seafloor beneath us was mapped in part by Tharp only about 60 years ago.  We’ve only recognized the existence of subduction zones like the Sunda subduction zone we’re here to learn more about within the past 50 years.  We’re still learning about what drives these systems and contributes to the locations of earthquakes all over the world—thanks to Tharp, and many others like her, who pushed the limits of science past barriers of gender, nation, and accepted ideas.  Here’s to many more years of exploration and innovation.

In her memory, here are many of the women on the current research cruise of the JR, Expedition 362: Sumatra Seismogenic Zone.  We have a high percentage of women on this cruise (39% among the scientists and technicians)!  (Photo by Tim Fulton)

* quotes of Marie Tharp come from this excerpt of an autobiographical chapter written by Marie Tharp in a collection of perspectives on the early years of what’s now the Lamont-Doherty Earth Observatory. http://www.whoi.edu/sbl/liteSite.do?litesiteid=9092&articleId=13407 < A nice reminder that paths through life are rarely linear, and pursuing something you love, are good at, and can get paid for can be a journey with great reward.

Short biographical entry from Columbia, where she used to teach: http://c250.columbia.edu/c250_celebrates/remarkable_columbians/marie_tharp.html<

Award press release from Columbia on the occasion of her receiving the University’s Heritage Award: http://www.columbia.edu/cu/news/01/07/marieTharp.html<