What is a subduction zone?

Today in Geology History: In Memory of Marie Tharp, Pioneering Oceanographer
Everybody wants to be a cat 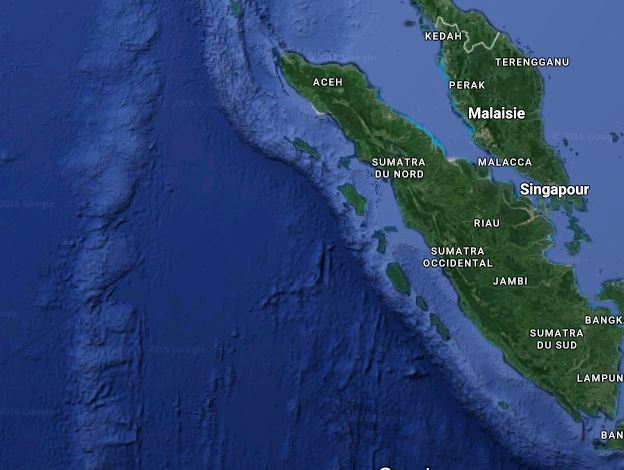 If you look for the position of the JOIDES Resolution on Google, you will find that we are actually drilling into the seafloor near a subduction zone (the Sumatra or Sunda subduction zone). The deepwater part of the subduction zone is sometimes called a trench. Since the 1960s, everybody accepts the idea that the lithosphere (the rigid, outermost shell of the planet) is made of plates and that these plates move relative to each other. And sometimes, they meet each other….

What is happening then?

One of the plates is denser and thinner than the other. When the two plates face off, the denser plate (here the Indo-Australian plate) will move underneath the less dense Sunda plate and stard to bend down into the mantle (at an average rate of 4 to 6 cm every year). But it’s not easy for many reasons: first, the plate is very tough, second it is carrying a thickness of sediments (up to 5 km) which are less dense than the igneous crust and don’t want to be buried (too young for that!). A tectonic fault is formed between the two plates and the movement between the two plates happens on this fault. Most of the time, there is no movement on the fault and it is stuck for many years (often hundreds of years). But when this stuck area moves, it moves very fast and all of the energy that has been building up for many years is released in a very short time–this makes an earthquake. This was the case in 2004 when a magnitude >9 earthquake struck North Sumatra and the Adaman -Nicobar islands. The earthquake moved the seafloor and this made a tsunami, which killed over 250,000 people around the Indian Ocean. Although rare at any one place on Earth on human timescales, over geologic time earthquakes are frequent in subduction zones.

The map reveals typical features of a classic subduction zone: a deepwater oceanic trench, a forearc prism, and an island arc. The Sunda Trench marks the location of the plate boundary at the seafloor, where the oceanic plate (the Indian-Australaian plate) meets the continental plate (the Sunda plate). The very thick sediments on the oceanic Indian-Australian plate are scraped off, forming an accretionary wedge. A series of islands are the crest of this wedge. The ridge is formed primarily from these marine sediments scraped off the oceanic plate and piled up on top of the leading edge of the continental Sunda Plate.

And it is that wedge which makes this subduction zone special. First, the structure and shape of the forearc changes a lot along the subduction zone form north to south (prism width, slope, prism fault dip…). The sediments offshore North Sumatra are very thick (due to the Bengal-Nicobar fan sediment system) and thicker than other places along the subduction zone. Additionally the rate at which the plates move towards each other also changes along the subduction zone. Earthquakes are expected in subduction zones, but the 2004 earthquake ruptured to much shallower depths and closer to trench than most other subduction zone earthquakes and ended in the accretionary prism. Scientists made similar observations for the Japan Tohoku-Oki earthquake in 2011 (remember the Fukushima disaster). In Sumatra, scientists are thinking that the changes in structure and shape of the forearc and of the unusual type of earthquake may have the same cause: the very thick sediments. Earthquakes are not destructive when they are small, and even large ones may not be destructive if they occur deep in Earth’s crust and/or far from inhabited places.  However, when they are large, shallow, and occur near population centers, they can be very dangerous.  Their effects can be even more devastating when they occur under the ocean floor.  In this case, they can trigger a tsunami, especially when they are shallow.

How can we explain these shallow earthquakes?

The properties of the sediments involved in the subduction zone in North Sumatra may be a part of the answer. This is one of the goals of the IODP 362 expedition: to characterize more precisely the physical properties, chemistry, and geological properties of the sediments on the oceanic Indian-Australian plate where they can be reached by drilling, before they get involved in the plate boundary fault where they generate earthquakes and tsunamis.

Thanks to Naomi for helping me in adjusting the picture!

For my blog in french: https://expedition362joides.wordpress.com/