Towards the Guaymas Basin Depth Record, But No Rush

Core on Deck!
Starting the Microbiology Hole, and a Birthday! 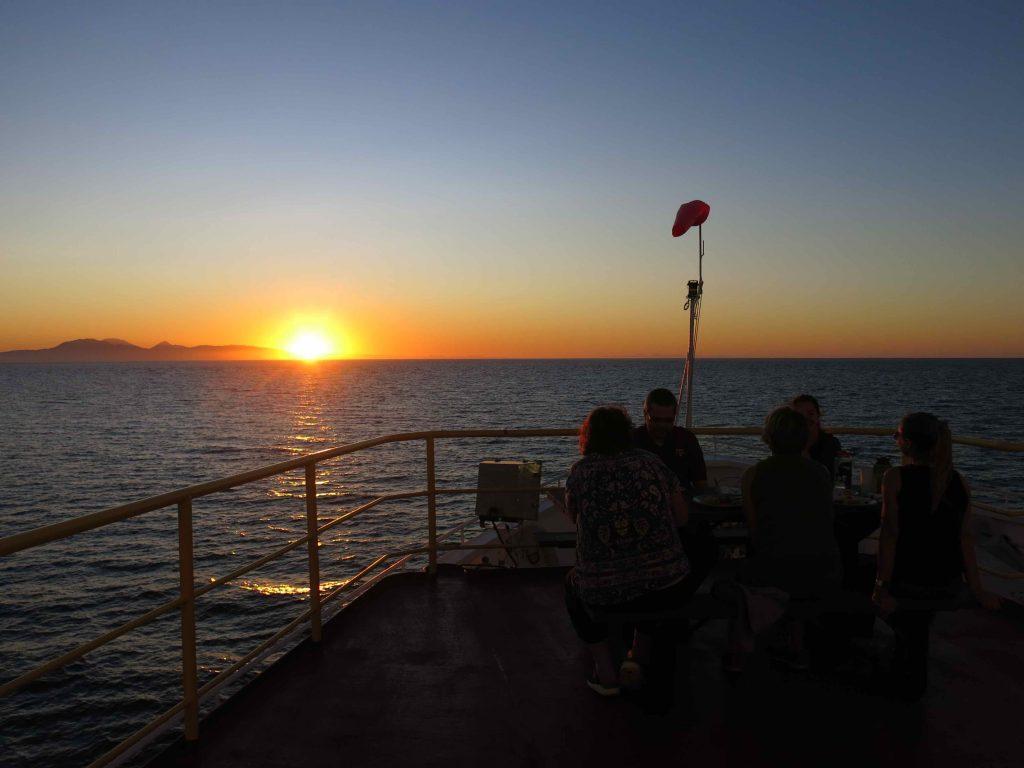 The very first observation in the morning has nothing to do with science. An eye-catching orange barrel is trundling around the JR at a measured pace — it is one of the ship’s four lifeboats during a drill. Lifeboats should be able to float, and this one obviously does, proving its seaworthiness by making some rounds around the JR in perfectly calm seas.

Today, the JR’s drilling team has the depth record for Guaymas Basin within reach, set in December 1978 at 464 m below seafloor (DSDP hole 478). Getting down to this depth with uncooperative sediment requires persistence; quite often the coreliner does not contain much sediment but brings up only the slushy “fountain of emptiness”. But at unpredictable intervals, everything goes very well and a full-length core is recovered. So it goes all day, two steps forward and one step back; or better, downward and up. The slower pace of core recovery gives the sedimentologists and micropalaeontologists a chance to catch up and to post their choicest pictures.

Micropaleontology is represented by PhD student John Sarao of Texas A&M University, and postdoc Lihua Ran from the Second Institute of Oceanography in Hanzhou, China. They are among the quieter science crew members, based in a particularly peaceful lab with lots of microscopes where they identify the shells and cysts of microscopic plankton species that are deposited in the sediment, and are slowly changing over time. The particular assemblage and the appearance or disappearance of planktonic species in the sediment column identifies the time window of a sediment sample. Without this visual key to the past, age determination of marine sediments would be a much more difficult job than it already is. Lihua has assembled a collection of electron-microscopic images of diatoms — single-celled phytoplankton that are famous for building intricate silica shells — from the upper sediment column. On the nearby Sonora Margin, diatom blooms alternating seasonally with terrigenous deposition form laminated sediments and provide a climate record with annual resolution — the marine equivalent of tree rings.

Not all marine life is microbial. The JR is visited by seabirds, the occasional sea turtle, and dolphins. Shipboard technician Peter Flaming has posted beautiful photos of what appears to be brown boobies, a common species in the Gulf of California. The birds sail without effort around the JR and, once seated, make comical faces, as if waiting for dinner. Do they know the JRs Sunday BBQ is coming soon?

The urban rumors about the Sunday BBQ were quite accurate — it is very good, indeed. However, a friendly debate develops about the relative merits of the JR version and the traditional BBQ on R/V El Puma, a.k.a. “el sabor auténtico de México,” once you figure in relative size of the galley, culinary heritage of the cook, availability of authentic ingredients, etc.  Some questions are best left undecided and take care of themselves in the setting sun.

Drilling continues all night; the borehole temperatures continue to increase slightly and converge towards 80°C, while exciting changes occur in the mineral assemblages … to be unveiled tomorrow, in the fullness of time. But the petrologists could finally find work that they are accustomed to…

This blog post first appeared on Sep. 29 on my daily blog of EXP385. Make sure to go to expedition385.wordpress.com to read the latest updates of this expedition!