Tracy’s Way – How to Get Geoscience Superpowers

Talking Points for Scientists or How Not to Be Nervous and Talk to Kids About Science
Postcards from Scientists – What is your favorite interval of geological time? 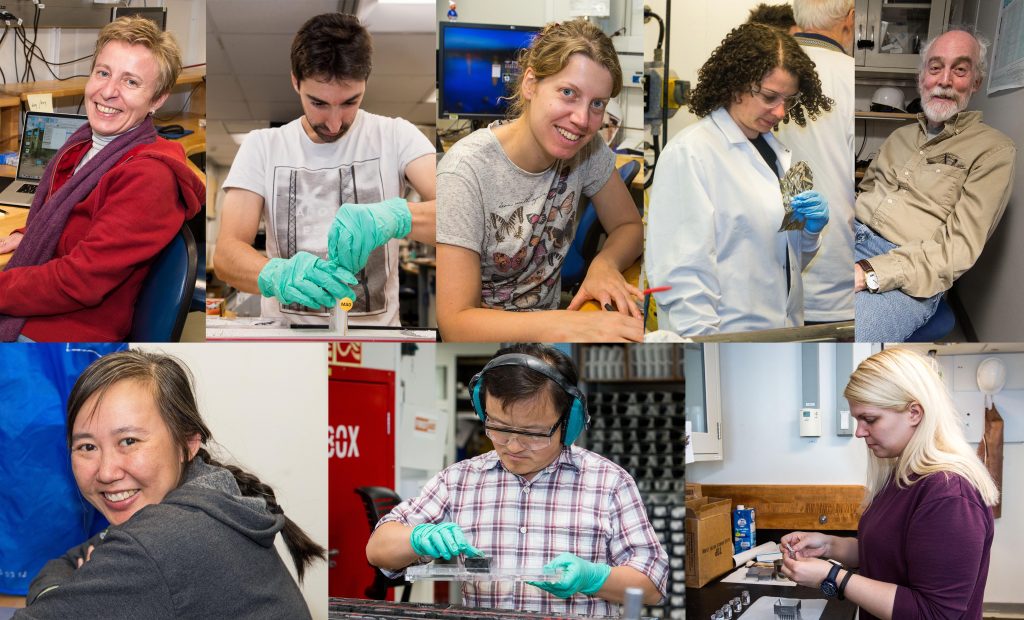 Tracy Quan, a scientist sailing on Expedition 369, had this to say about the how and why to becoming a geoscientist…

Several times a year, I get the chance to participate in a few outreach programs designed to introduce secondary school students and their teachers to the geosciences. One of the questions that frequently gets asked is what type of classes or skills would be useful for someone who might want to become a geologist. On one hand, there is no set formula for becoming a geoscientist. Geologists come from all walks of life, with a wide range of different experiences that lead them to geology. I know geologists who previously had careers as educators, businesspeople, mechanics, engineers, artists, even ministers, and those skills helped shape them as geoscientists. 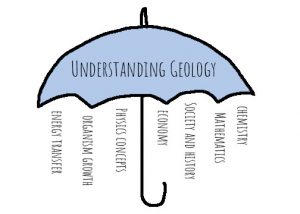 But there are some things that I might recommend. For the most part, I think that the most important trait would be an interest in the field and a willingness to put time and effort into learning and researching. In addition to taking classes in geology, doing courses in other science and math fields would be useful. When I teach Introduction to Physical Geology, I tell my students on the first day that if you think this class will be easy because you won’t have to learn about the behavior of different elements, energy transfer, organism growth, math equations, and other ‘harder’ science concepts, then you will be sorely disappointed, because we will be discussing all of those things (along with economic, social, and historical concepts).

Frankly, this is one of the things I especially like about the geosciences: that it does combine concepts from other fields of science. Even though I call myself a geochemist, my research involves concepts from biology, physics, and math, in addition to geology and chemistry. My projects don’t stand alone; other researchers have used their expertise in paleontology, sedimentology, geophysics, etc. to analyze other aspects of the same questions that I am trying to answer. Here on the JR, I often use my breaks to ask questions of other researchers. Together, all the pieces fit to make a complete picture of a particular environment, process, or time period. 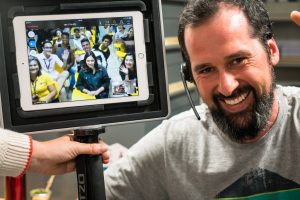 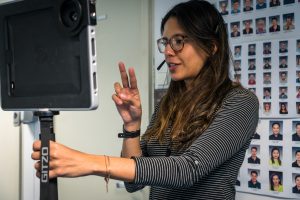 Photos: One of the goals of each expedition aboard the JR is to introduce scientists to students around the world through live broadcasts.

A geologist also needs to be a strong communicator in oral, written, and even graphical formats. It can be a challenge to explain data or conclusions clearly, concisely, and at a level appropriate to a particular audience. I’m frequently in awe at some of my colleagues’ work in these areas, particularly when artistic talent is involved since my abilities are distinctly limited in that realm. I think that these communications and interpersonal skills are often under-emphasized for science fields, and students are sometimes surprised at how essential they are. The ability to communicate with the public about what geologists are learning about the past, present, and future will only become more important in the years to come. 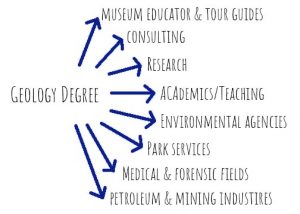 What can a person do with a geology degree? The geoscience field encompasses a wide array of specialities and jobs, so the answer is ‘pretty much anything’. There are those that go into academics, or the petroleum/mining industries, or who work for various geology or environmental agencies at the state and federal level. Geoscientists serve as experts to assess environmental, energy, or geological risk issues, and even start their own consulting companies. Research areas include the atmosphere, oceans, continents, urban environments, and other planets. There are geologists who work with forensics investigators to solve crimes, and with doctors to determine environmental causes of illness or identify drugs from natural products. Geology graduates work as science teachers, museum educators, and tour guides. Some geologists have had more than one type of job, all within the geosciences. If a student is interested in a specific type of job, there are often professional internships and university programs tailored to provide experience in those areas. For example, my home department, the Boone Pickens School of Geology, is working on developing course recommendations for emphasis areas in petroleum, environmental, and pre-law so that geology majors who are interested in these areas can get a head start.

Since this blog is all about the diversity of geoscience and geoscientists, I thought that I would ask some of my fellow JR scientists about their favorites. Here are 5 favorite sections of geologic time other than the Cretaceous (given we’re on a cruise studying the Cretaceous that was most peoples’ first choice), and 6 favorite plankton species (because there are 6 paleontologists on board).

5 favorite sections of geologic time (in no particular order)
1. Archean: ‘On the big picture scale, it’s so interesting because it’s the very beginning, and the Earth was very different’ (Carl Richter)
2. Maastrichtian: ‘I’m Dutch, and it’s the only age named after a Dutch city’ (Sietske Batenberg)
3. Paleogene: ‘Lots of interesting climate changes during this period’ (Takashi Hasegawa)
4. Lutetian: ‘It’s named after the old name for the city of Paris’ (Laurent Riquier)
5. Llandovery: ‘It’s just fun to say’ (co-Chief Scientists Richard Hobbs and Brian Huber)
(Many thanks to Lauren O’Connor for helping poll the day shift scientists!) 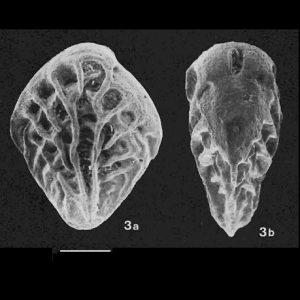 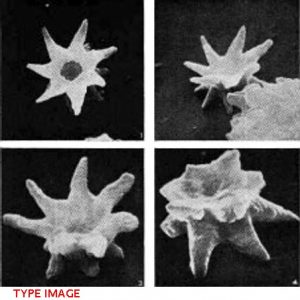