Tripod on a Boat?

Our Coring Toolkit
Drilling into the Depths of the Bengal Fan 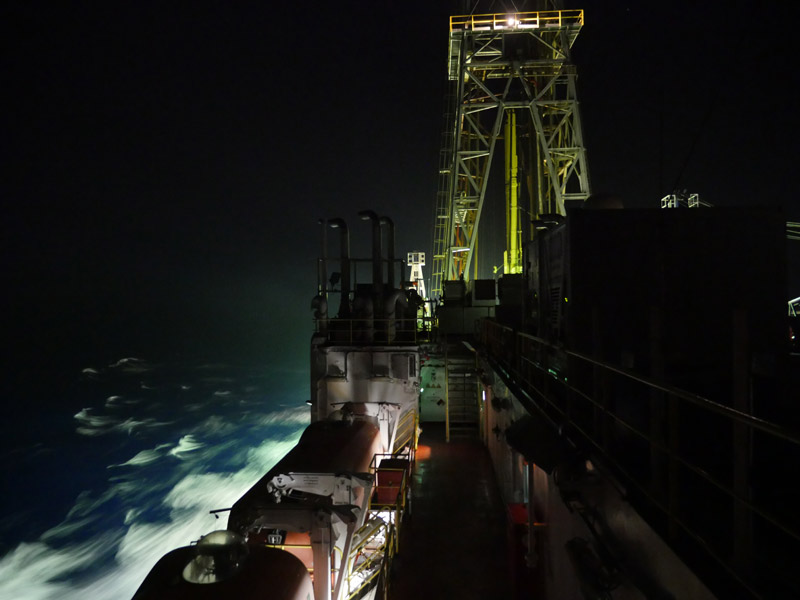 As a photographer and filmmaker, I am a huge fan of the tripod. I’ve been using one since the beginning of my photographic life, a time when cameras shot film.

A tripod improves my images in several important ways. For stills, it eliminates camera shake and allows me to shoot in low light without compromising image quality. The rule of thumb for hand-holding stills is to shoot at nothing slower than 1/60th of a second shutter speed. And if you’re shooting with a telephoto lens, that rule gets stricter and changes to 1/the focal length of the lens. It’s all about avoiding camera shake. Fast shutter speeds freeze the action. Slow shutter speeds blur whatever is in motion during the exposure.

In video production, I try to always shoot at 1/60th, but I still like to use a tripod. A tripod gives me smooth camera moves. You might think a tripod would not be helpful on a moving ship. It turns out, since the tripod, camera and ship all move in exactly the same way, there is no relative motion. The ship stays sharp and stable in a picture, giving viewers’ eyes a place to rest in a shot when the horizon might be rocking a bit. It’s very helpful.

The other thing I like about a tripod is also its disadvantage. It slows me down. It makes me stop and really make a creative decision about how I frame my image. I can check the margin of my shot to make sure everything in the frame is in because I want it in, not because it’s been accidentally photo-bombed by random things I may not have noticed if I was moving fast. A tripod is definitely not convenient for the “run and gun” style of shooting though.

Trying to shoot operations on the ship – and stay out of the way, is primarily run and gun. Circumstances are forcing me to try different techniques, like not using my tripod all the time. I have to admit, I generally like my results. The biggest surprise is how good my danged iPhone 6 works. I have it in a housing that puts a wide angle and macro lens in front of the built in lens. I have an app called FILMic Pro that let’s me control exposure, focus and audio. And perhaps the key here is, I’m shooting in 1080p, but editing a 720p video. The built-in stabilization capability in my editing software has a lot of extra room to stabilize my hand-held shots. I am not giving up on tripods, but it’s great to have a workflow for when a tripod gets in the way.