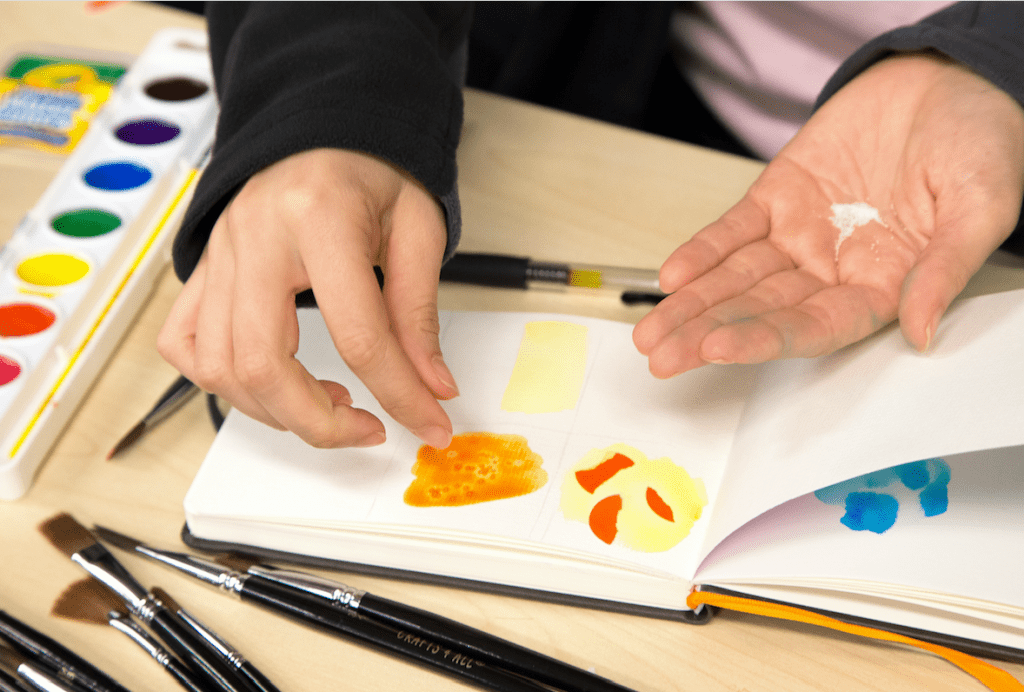 Watercolor Wednesday continued for the second week with energy levels a little lower than before. The students, instructors, science party and outreach team have worked around the clock since boarding the ship two weeks ago. But, having a space to paint without a structured environment is exactly what our tired brains needed. For this week’s class, I showed the group a few techniques they could employ when painting in their free time. Many of the techniques are skills they already picked up from last week’s class (solid wash, graded wash, drop color on wet, etc). The difference now may be that they have a name for the method and can identify it in other pieces. Knowledge is power!

By far, the favorite technique was using salt to create patterns in the wet pigment. The salt crystals soak up the color, leaving behind random starburst patterns. I like this method because no two swatches will turn out the same. There’s a method to the technique, but the results are abstract and unique. One of the students, Alondra, was so inspired by this process that she is using it in her poetry book. She’ll use the salt crystal pattern to symbolize microplastics in the oceans that affect marine animals. Here is Alondra proudly showing off her turtle and salt swatch samples. 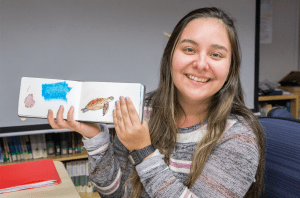 The students may be tired because they have worked hard this week in labs and classes, though I suspect most of their brain-power was given to their science communication projects. It’s great to see how inspired they are with this component. This week also saw the first ship-to-shore broadcast with Randi’s group. It was a success! The connection was with a high school classroom on the East coast of the United States. The broadcast group did a fantastic job learning the equipment and Zoom program, preparing the script and tour, and most importantly, adapting to the challenges. Ship-to-shore connections can be unpredictable and daunting, but the four students in the broadcast group did a great job.

Kristen’s students spent the week developing a script and storyboard for the final edited video. The video will focus on the science conducted onboard the JR and is intended for a middle school to high school level audience.  She also presented a workshop on the “message box” method of communicating science. This is an effective tool developed by Compass to help scientists make their research accessible and relavant for a specific audience. 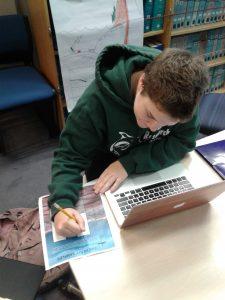 My four students in the 2D design portion also put a lot of time into their projects. Ingrid is working on a scientific illustration detailing an instrument used on this expedition. She has identified her audience as the science community with previous science knowledge and has focused the illustration’s message on the mechanism and purpose of Geoff Wheat’s water sampler. I’m pretty blown away with how quickly Ingrid has picked up on these skills. She has a bright future in scientific illustration if she chooses.

It’s hard to believe we’re already in week two – almost at the halfway point. It feels like we’ve accomplished so much, and yet there’s still so much more to do! Time to re-center, calm the mind with some paints and soak up the experience (much like the salt crystal).