We Finally Have CORE! Now What?!

Preparing to Drill!
A Numerical Tribute to Site U1553 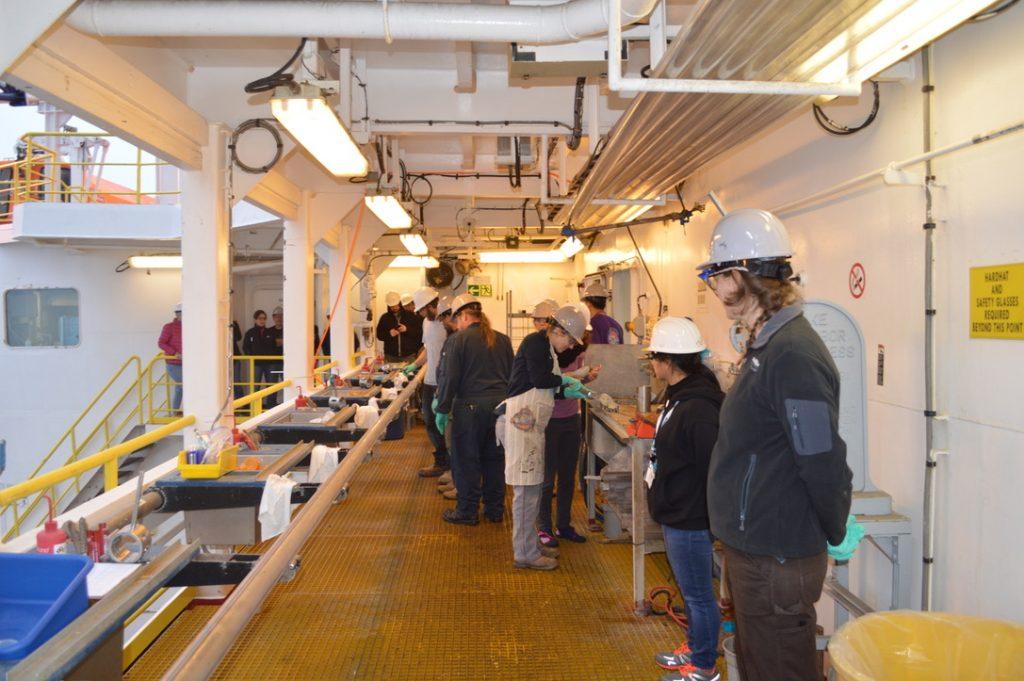 Once the drillers have handed off the ~10m core to the marine technicians, we begin the core flow choreography that has been rehearsed over (and over and over) again during our transit. The Marine Techs take the core from the drillers and lay it out on the rack on the catwalk. Then they cut the core into 1.5m sections.

While most of the Marine Techs are sectioning the core, Susan extracts the sediment from the core catcher (the material at the very base of the core) and hands off a ~5cm section of this to the micropaleontologists. The micropaleontologist in the shipboard science party examine the assemblages of microfossil species to determine the age of the core. More on this later.

A few other types of samples are taken on the catwalk. Small portions of several core sections are cut off and handed to the chemists, who process the samples in hydraulic presses to extract the water that exists in the pore spaces between the sediment grains. The residue of this process is known as a “squeeze cake,” and we will learn more about this process in an upcoming post.

The chemists also take a sample from near the top of each core to monitor any gases that might exist within the pore spaces or pockets of the sediment layers. This is primarily for safety – the JR is not equipped to drill safely into gas-rich sediments and we monitor hydrogen sulfide, methane and other hydrocarbons to ensure there is no hazard. We don’t expect significant quantities of either in the cores recovered at Site U1553, but these analyses are required by our safety protocols.

The final type of sample extracted from the cores on the catwalk is for microbiological analysis. These samples will be investigated in order to understand the limits of life and how microbes are able to exist and subsist within the seafloor.

After sectioning and catwalk sampling, the core sections are brought inside the core lab for redundant labeling and then a resting period during which the temperature of the cores is allowed to equilibrate with room temperature (temperatures at the bottom of the ocean and in the upper layers of sediment are significantly colder than room temperature). During this equilibration period, the Physical Properties team is experimenting with the new x-ray analytical system. Alex and Gabby began taking x-ray images as soon as the cores were labeled:

After the cores are run through the MST, the marine techs split them lengthwise into two equal and opposite halves. We are almost ready to split the first core!!! In the next post I’ll share how we describe and analyze the cores once they are split.

Until the next time,