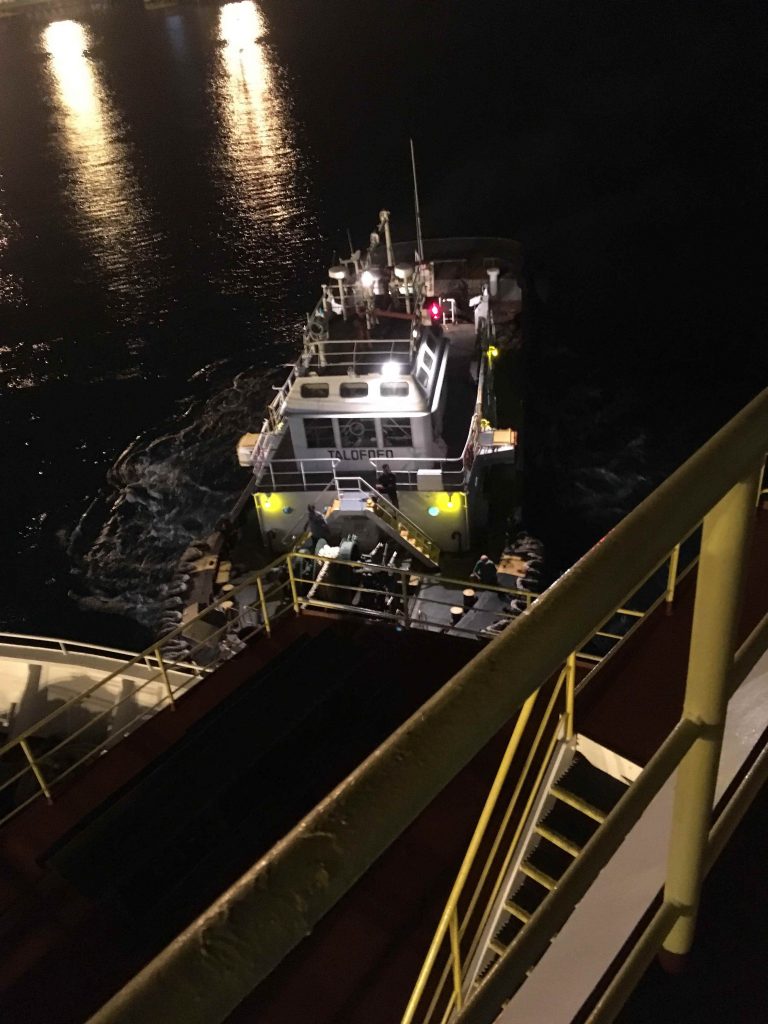 At 5 AM local time the JR un-moored from our harbor in Guam, the tug pulled it away from the dock, and we set out for our first site, ODP Leg 195 Site 1200, to un-CORK that instrumented hole and prepare it for newer/better instrumentation.

I was up at 3 AM – a side effect of advancing age has been an increasing lack of ability to easily adjust to time zone changes – and grabbed a quick workout and coffee before heading to the “Steel Beach” (the roof of the Bridge) to witness the event.  From there the night before I watched my last sunset for a while (see below), and this morning it was dark and moonless with only the the harbor lights and a scatter of lights from the island.   Once under our own power we followed the pilot out – and once we passed the headland, we felt the swell.

It wasn’t bad – about 2 m or so from my crude visual estimate –  but my inner ears definitely noticed!  Per my advice to myself from my blog entry two years ago I had stopped in to see the ship’s doctor for his recommended seasickness remedy, so I wasn’t queasy, but the motion took some getting used to.  I waited out my adaptation period on top of the bridge, watching the JR ride up and down the swells.  As it did, it scared up schools of flying fish, which leaped from the water and glided ahead of the bow – and this in turn attracted seagulls (the circle of life, as it were, on the wavecrests…).

At 8 AM we had a scheduled meeting with our JR Operations Supervisor, who outlined our planned operations, the particular challenges of the engineering we would be doing at Site 1200 (fingers crossed for it working!) and the different kinds of coring bits and equipment they have onboard to optimize sample recovery.  It was a thorough, useful, and informative presentation – which I struggled to pay attention to as the conference room gently tipped and rolled.  And, judging from the looks on the faces of my science team colleagues, I was not alone in my anguish.

After an orientation by the IODP curator on sample labeling and oversight, I headed to a (rather empty…) mess room for what would be my last meal of the day, as I will be heading to bed as early as I can to get on schedule for the night shift.  Before I could do that, however, there was one more safety event – our first Abandon Ship drill, wherein you don the life vest, hard hat and safety glasses in your stateroom and head to your assigned lifeboat, where the crew both counts you up, and provides some further, brief, safety orientation information.  When I get up tomorrow, we’ll be at Site 1200, and hopefully we’ll have a CORK on board too.