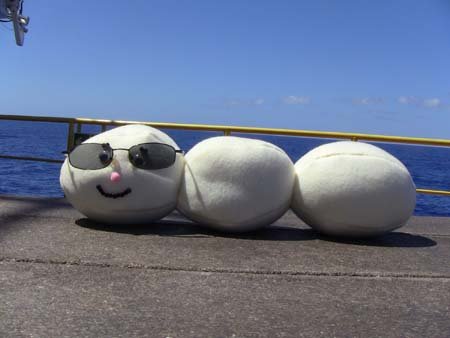 Life doesn’t get much better! While working very hard catching some sun rays yesterday, I was visited by my friend the Minke Whale. I had to actually get up and look over the side of the ship to say hi to him. He teased me by swimming first on one side of the ship, then diving below and under, and then surfacing on the other side. Minke, as I call him, continued to do this for more than an hour. He even blew water in my face through his blow hole! I have a few photos of him below.

While I was working hard on the deck, as you can see, the scientists were busy working in the lab. Several of the scientists are doing their work in a cold room where the temperature is about 10 degrees C. They are measuring the amount of oxygen in the sediments.