What Can We Learn From a Smear Slide?

Collaboration from Pole to Pole
Not Just a Pebble in Mud 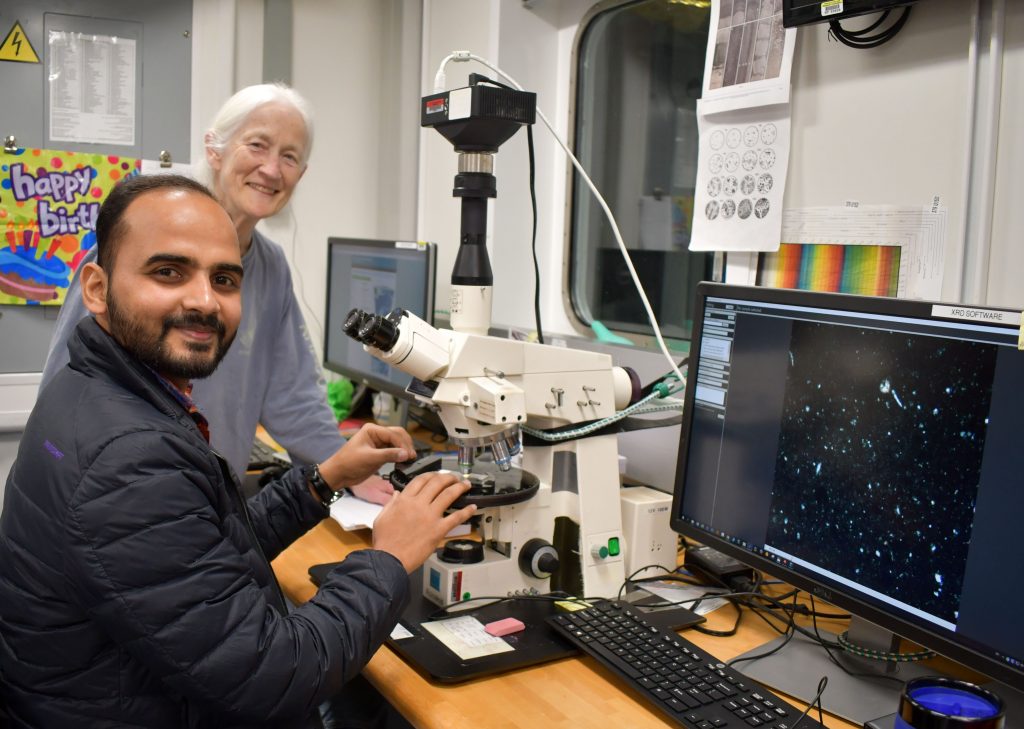 After starting a PhD at the National Centre for Polar and Ocean Research (NCPOR) and working on sediment cores recovered from the Arabian Sea during the International Ocean Discovery Program (IODP-355), it was my desire to participate in an IODP expedition in the Antarctic region. IODP Expedition 382 “Iceberg Alley and Sub Antarctic Ice and Ocean Dynamics” provided the opportunity to participate as a Sedimentologist, which is slightly away from my primary research interest (stable isotope/trace metal geochemistry). Working with scientists with years of experience in research, looking at the sediments on the core table, and observing the gradual changes in colour and texture is an exciting experience. The description of IODP sediment cores is made using smear slides combined with careful visual observation of the sediments.

With many sedimentology research options, I chose to describe smear slides. Smear slides? Smear slides are used to determine the composition of sediment recovered during coring. The technique is also known as smear slide petrography. It is like exploring a new world under the microscope.

To make a smear slide, I take a small amount of sediment on a toothpick. The sediment is then smeared uniformly over a glass slide and dried on a hot plate. We use special glue to cover the sediment, and finally I cover it with a thin piece of glass, a coverslip. The cement hardens in a box under UV light.

On IODP Expedition 382, we use smear slides to help to identify the components present in the sediment. It is composed of material that originated on land and the remains of tiny microscopic organisms from the ocean. The tiny (microscopic) organisms are the skeletons of plankton such as foraminifera, diatoms, and radiolarians. The sediment of IODP-382 contains clay, silt, and rarely sandy materials. Most of the sediment also contains a lot of diatoms, which shows the high biological productivity of the region.

Observing minerals under the microscope is like seeing the Google map on a computer screen, and we have to spot various minerals by observing their behavior under a special light. Minerals change colour when rotated, sparkle, and they appear and disappear—playing hide-and-seek with us! This is like gazing at stars in the night sky. Quartz, feldspar, and clay are the major components of the land-derived material. Very often, we have found minerals like amphibole and glauconite, which appears greenish to dark green under the smear slides. We see rock fragments and materials like pyrite in most of the slides. Some sediments have glassy fragments, which may have come from a volcano.

Our IODP-382 sites are very close to Antarctica and are under the influence of the Antarctic Circumpolar Current (ACC). The ACC is a giant ocean current that flows around Antarctica. We are here to learn about how its behavior changed in the past, information that will help us to predict what might happen in the future as Earth warms. Today, the ACC is responsible for distributing heat and nutrients around Antarctica The variation in diatom abundance can be linked with the strength and variability of the ACC. We can learn a lot from smear slide petrography. It is a very good technique for determining Earth’s history and is very helpful to the other scientists in selecting the sediment samples for different kind of analysis.

I observed smear slides after my BSc (Hons.) classes at Banaras Hindu University (BHU). I recall most of the things needed to recognize different minerals under microscope. Dr. Suzanne O’Connell from Wesleyan University, who is the lead core descriptor, has helped me learn to describe smear slides. I am having a good experience on IODP Expedition 382 with scientists and researchers from different background and nationalities. While working as a research fellow at the Antarctic research Centre in India, I am beginning my Antarctic Research on this expedition on the JOIDES Resolution through the Scotia Sea and Drake Passage, which will give me a more refined perspective in understanding climate and Climate Change.