Not Just a Pebble in Mud

What Can We Learn From a Smear Slide?
A Chat with Mo 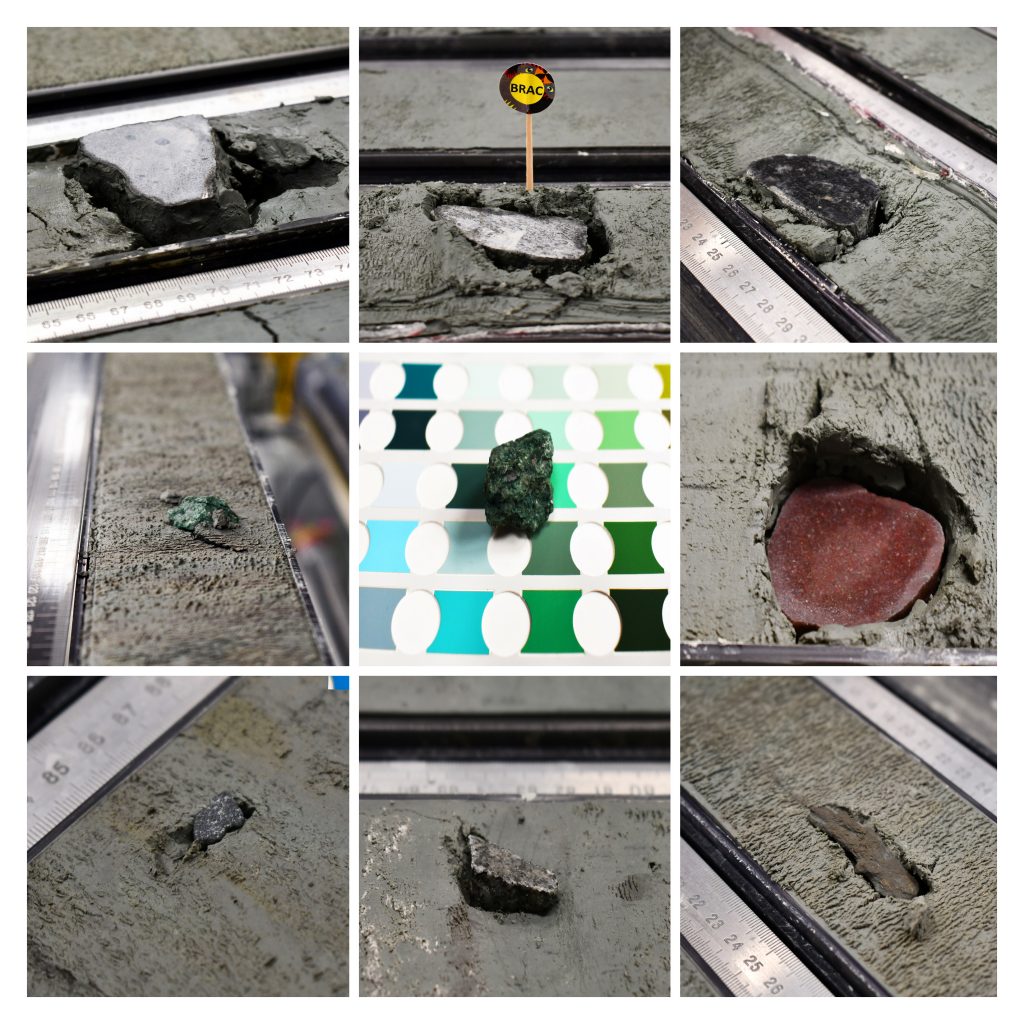 A pebble sits in greenish-greyish mud. It’s an unassuming pebble, small, jagged, not much to look at, but it has scientists in the core lab buzzing. This is what’s called a “drop stone”—and we know it was deposited by a melting iceberg long ago*. Soon, we’re finding other pebbles, small stones, and a rock that fills the core liner from side to side. Over the next week or so, some sandier layers appear in the cores and more and more pebbles in a variety of colors.

Tonight, Sedimentologist Thomas Ronge gently taps my shoulder and points. The table is half full of cores, and the one he wants me to see brings an immediate grin to my face. Close together lie several stones: one pinkish in color, one that looks like granite (I’m told it’s a grano-diorite), a black one, and some smaller pieces. My thrill as I realize what these may tell us is immediate!

“The fascinating thing about drop stones,” says Thomas, “is that these rocks can not only tell us about the waxing and waning of Antarctica’s glaciers but also that they endured such an epic journey. From rocks on land becoming trapped in glaciers, to floating offshore in icebergs, to raining into the deep sea—and millions of years later, they end up on our table and help us to understand past and future Climate Change.”

Sedimentologist Anna Glüder places a smear slide under the microscope for me to look at, promising it will look very different to what we’ve been seeing. “It’s not just the large pebbles that show us times when the Antarctic Ice Sheet has undergone large changes in the past. Under the microscope we see a clear difference between layers deposited here during warm intervals compared to those which we expect to occur during glacials. There are times when there is so much plankton in these waters that the sediment looks like a zoo under the microscope. At other times we see that they are almost entirely gone from the sediment.”

And she’s right: the change in the sediment’s composition is very obvious. Where before there were many intact diatoms (microfossils of a kind of phytoplankton), fine mineral grains, and lots of sponge spicules (long, cylindrical structures found in sponges), on this slide are only an occasional piece of shattered diatom, no sponge spicules, and much larger sparkling grains of various minerals. While this sandy sediment embedded in greenish-greyish mud appears slightly different to the naked eye, it is remarkably different under the microscope.

To understand the importance of what we’re seeing, and our excitement, we must consider the origin of icebergs.

Icebergs are born when they calve from ice shelves and glaciers. They began on the Antarctic continent as falling snow, which became compacted and turned to ice over thousands of years. And ice is fluid. The Antarctic Ice Sheet is so thick and so heavy that its ice is ever flowing slowly downward and outward. But as ice grinds across the land, it picks up rocks and dirt, sand and mud. Some may also fall onto glaciers from rock outcrops above.

Some ice eventually reaches the sea. When it reaches the margin or “calving edge” of the ice sheet or glacier, it eventually breaks off, forming an iceberg. As it continues its journey in the currents around Antarctica, an iceberg carries any material it has picked up in its travel across the land as “iceberg-rafted debris” or IRD.

When an iceberg finally reaches warmer waters and melts, this IRD (the rocks and dirt, sand and silt it carried) sinks to the seafloor. Other material—often called “marine snow”—is sinking through the water column, too. Among other things, it includes the remains of dead plankton, which may become the microfossils we use to help date the sediment. It’s this material, which creates a layered record of changes through time, that we are drilling into on Expedition 382. It will help us reconstruct the history of melting Antarctic icebergs.

It’s fascinating that, not only can we use the material immediately around the drop stone to date when the iceberg melted, but we can even determine which part of the Antarctic continent the drop stone came from. In other words, we can discover the iceberg’s “provenance”. And this is what really thrills me and the science team. Knowing both when the ice was melting and where it was melting is vital to understanding how the vast Antarctic Ice Sheet behaved in the past. Was most of the melting at the beginning of warmer periods confined to the now vulnerable West Antarctic Ice Sheet? How much did Antarctic melting raise global sea level in the past? How much of a role did the much larger East Antarctic Ice Sheet play?

Together this information will help us predict what may happen to the Antarctic Ice Sheet as our world continues to warm due to our greenhouse gas emissions. Truly, the work of scientists on Expedition 382 is massively important to our future.

And these unassuming pebbles stuck in greenish-greyish mud? They hold the key…

CODA: I finish writing this post, there is a sudden flurry of activity in the core lab. Everyone rushes to the sampling table. A series of cores has arrived with drop stones that are anything but unassuming—a  number of larger stones, including a large rock a foot or more wide. A spirited discussion about what kind of rock it is and what it means ensues. Time—and proper analysis—will tell! * “Windborne dust barely reaches the sand fraction. It’s impossible for wind to transport these pebbles. Sea ice might be able to transport some of it, but we’re still far to the north and usually this stuff rains out way earlier,” says Thomas.
#Exp382
21
Apr 2019
By MGarnsworthyAntarctica, Climate Change, Drilling, Geological time, History of Earth, Iceberg Alley, Icebergs, Microfossils, Sedimentology, Southern OceanLeave a comment