What “core on deck!” means in the Geochemistry Lab….

What "core on deck!" means in the Geochemistry Lab….
Hurry up and wait…. 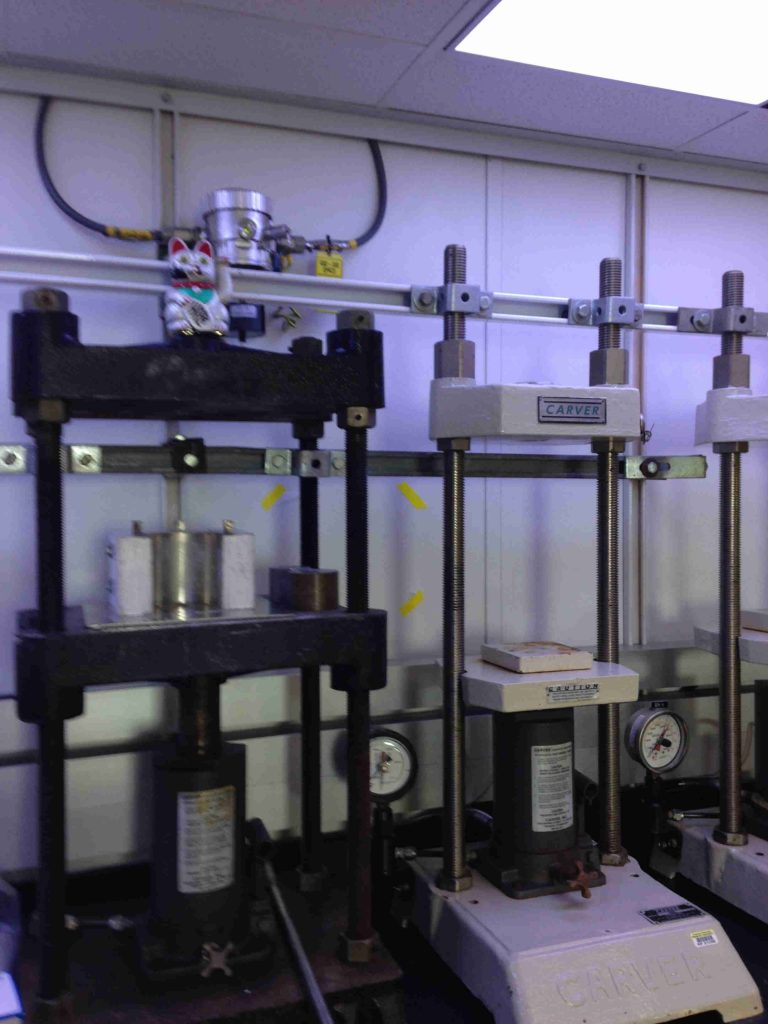 I went to bed anticipating active work on cores, and got up for my next shift to discover: my colleagues were STILL anticipating active work on cores. Some challenges on the drilling floor delayed their appearance, but around 4 AM the first sediment cores from IODP Hole 1439A (site BON-2A in the prospectus) were carried onto the catwalk for cutting and basic examination.

Those basic examinations involve the Geochemistry lab pretty significantly: first, sampling for a “head gas” test, to determine the amount of volatile hydrocarbons in the core (i.e., methane and such) – an essential safety test that is required for drilling to proceed; and a large (“full round”) sample for porewater collection and analysis. For the first 100 meters of drilling, both of these tests has to be done on each core brought to the surface.

The “head gas” test is simple – you take a vial-size plug of the material, heat it gently in a drying oven, and then syringe out the evolved gases for injection into a gas chomatographer to examine the abundances of methane, propane, and a few other volatile hydrocarbon species. Fortunately, so far none of the cores we’ve examined have had any significant hydrocarbons. The porewater examination is more involved, starting with the “squeezing” of the sediment to extract its water. This requires the use of demountable pressure vessels and a hydraulic press, which squashes the sample and squirts out its porewaters via an aperture at its base. Once sampled, the waters are measured for pH, alkalinity (a measure of dissolved/dissociated CO2-CO3 primarily), chorinity (an anion measurement, comprised largely of chlorine) and total salinity (done coarsely via the optical refraction of the liquid). Both the fluids generated and the sediments splits and “squeeze-cakes” produced are labeled and archived, available for the use of other researchers the world over. On other cruises a whole bunch of other measurements might be done – Carbon-Hydrogen-Nitrogen-Sulfur (C-H-N-S) analysis, trace elements in solution, etc. – but as Leg 352 is primarily an igneous rock-focused expedition, there isn’t interest in more detail among the shipboard team, and as such our work on this is minimized to the basic archival requirements for these materials by IODP guidelines.

Aside from geochemical tests, a sample of each sediment core is examined for nanno- and microfossils (part of dating the sediments – these results are compared to results for paleomagnetism to converge on an age), and it is comprehensively imaged. Once this is done, it is left to “equilibrate” on racks in the core lab for several hours to allow it to warm to lab temperature and stabilize in the core tube. Then the core is split Quiet Shifts, Crazy Crossovers…in half, and the scientists responsible for core description will conduct a thorough visual analysis, followed by the subset of our number who are interested in sampling it for research purposes.

Like so much of research geochemistry, our efforts on the head gas and porewater results are a lot of hurry-up and wait (an hour at a time, for the next core to come in). But it’s great to be doing something practical – helps with the last lingering effects of jetlag and seasickness (both, blissfully! on their last legs). I’m looking forward to the promised, more involved geochemical work of this cruise – the chemical characterization of both the sediments and the volcanic rocks we hope to drill into at this site. We’ll see what tomorrow brings!