Where time is it?

COVID on Deck (Part 1: EXP391)
On Ocean Drilling and Expectations 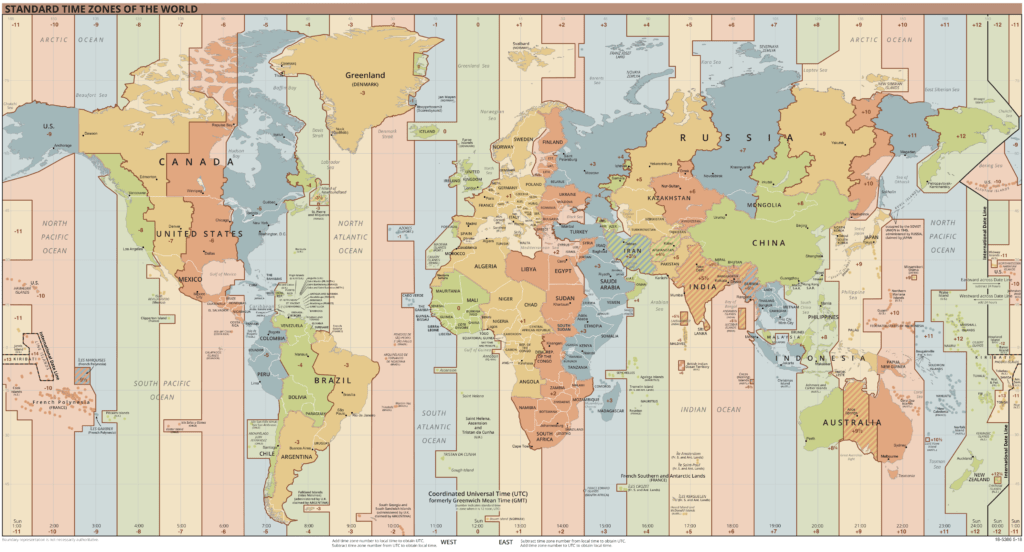 This post was written with contributions from EXP397T Captain Harm Nienhuis, and Onboard Outreach Officers Dr. Laura Guertin (EXP390) and Maryalice Yakutchik (EXP392).

It’s something we learn in grade school and take for granted for the rest of our lives: the Earth is round and it spins on its axis, so different parts of the world receive sunlight at different times over a twenty-four hour period.

As we get older, we learn that these time zones can be marked by longitude – imaginary lines on Earth’s surface, measured in degrees, that tell us how far east or west we are from the Prime Meridian. Earth rotates 360º in 24 hours, or 15º every hour. For that reason, each 1-hour time zone spans a distance of 15º of longitude.

In this day and age, time zones are no big deal. Most of us spend most of our time in a single zone, and if we move, all of our devices are connected to satellites that automatically update the time with our location. The greatest inconvenience is remembering to change our wristwatches, and that’s only if we haven’t upgraded to a smart watch yet.

But sailing around the ocean presents a unique challenge. Over the course of an expedition, the JOIDES Resolution may cross one, two, or even five time zones in just two months.  Between communication with supervising agencies on land, ports in different locations, and virtual broadcasts with schools all over the world, how should the vessel reconcile ship time in a way that maximizes communication and keeps everyone on board sane?

On one hand, maintaining a single time zone on the ship throughout the entire expedition is very convenient. We are constantly in communication with people on shore, so it helps that the time difference between us and them doesn’t change.

Before you leave for an expedition, you agree with your supervisor that you will meet every Tuesday at 10:00 AM CST. If ship time kept changing, one week your meeting would be at 3:00 PM, then the next it might be at 5:00 PM, and so on.

You’re the onboard outreach officer scheduling virtual ship-to-shore broadcasts for school groups. You have a tour planned for 8:00 AM tomorrow, but ship time changes overnight, and all of a sudden you’re expected on Zoom at 7:00 AM.

Situations like these make it very challenging if ship time keeps changing.

Keeping ship time constant also means we don’t have to worry about adjusting our personal timepieces (watches, phones, computers, etc.). We set them when we get on the ship and we leave them.

For expeditions like EXP391, where we only traveled about 15º from our initial port, and returned to the same port at the end of the expedition, it made perfect sense not to change the clocks. When we were drilling, sunset and sunrise were about an hour later than they had been in port, but we hardly noticed.

For expeditions like EXP390 and EXP393, where we sailed from Cape Town to the mid-Atlantic ridge, it was a different story. Each day the sun would rise a little later, until it got to the point that day didn’t break until after 10:00 AM! This could be viewed as a minor annoyance (I’d rather eat my breakfast in the light of day, thankyouverymuch), but it also had technical and logistical implications for shipboard operations.

Everyone onboard the JOIDES Resolution works a twelve hour shift. Some work from noon to midnight, others from midnight to noon. But there’s also a group (and it happens to be a very important group: Captain, Physician, Camp Boss, Operations Superintendent, Expedition Project Manager, and more) that works from 6:00 AM to 6:00 PM. Even though the ship operates 24 hours a day, there are many tasks that are best accomplished in the daylight, and it’s hard to get deck work done if the first four hours of your shift are in darkness.

For some expeditions, it makes sense to adjust the ship’s clocks. Expedition 397T began in Cape Town, but will end in Lisbon, one hour behind. The most logical thing to do was to change the time when we arrived to our first drilling site, because we had already travelled a significant distance west, and we would already be in the time zone of our destination for when we began the major portion of our transit.

The good thing is that none of these issues affect the operation of the ship. Its systems are always set to Greenwich Mean Time (GMT), so navigations and communications are never disrupted, no matter the location.

Nevertheless, changing ship time can get confusing if you think too hard. It’s best to leave the important decisions to the Captain and adjust your clocks when you’re told.

And if you ever need help remembering which way to turn the clocks you’re crossing time zones, he are some words of wisdom from Captain Harm:

Go West, Sleep Best… unless you are on the night shift!