March 2012
A note from Co-Chief Ishizuka 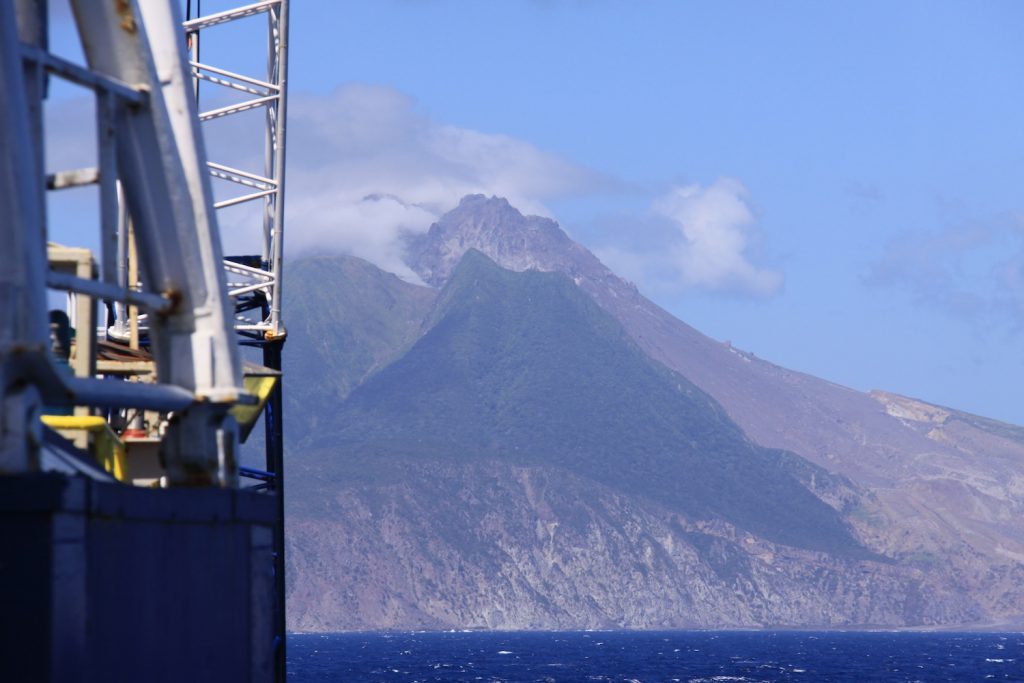 We are sailing in the Lesser Antilles or West Indies of the Caribbean Sea. Scientists aboard the JR such as volcanologist, sedimentologist, inorganic geochemist, and micropaleontologist are at this location in the ocean because of the volcano on Montserrat, called the Soufriere Hills volcano. This is one of the best studied volcanoes on the planet. The eruptions began in 1995 and continue today. In 2003 the dome (top) of the volcano collapsed. Scientists estimate that over 70% of the erupted material has washed into the adjacent ocean less than 3 km away. The surrounding seafloor was quickly covered with volcanic deposits. Teaser Photo credit, Fukashi Maeno, 340 Sedimentologist/Volcanologist

Since the 1995 eruptions the volcano has been under continuous surveillance.  England has an observatory on the island to measure and document the behavior of the volcano.  In particular a detailed series of data before and after eruptive events has been compiled. Scientists have generated lots of data from land-based measures and from marine cores collected to maximum depths of about 6 meters in the seafloor.This means that Montserrat is one of the best studied volcanoes on the planet!

Now it is time to go deeper into the seafloor to discover the volcanic history of Montserrat up to a million years ago, maybe even longer. The islands comprising the Lesser Antilles began to emerge from the ocean floor well over 2 million years ago.

Thanks to Adam Stinton, 340 Volcanologist,  for sharing the above photographsof Montserrat

A major question for Expedition 340 is to explore what happens when the majority of volcanic material (pyroclastics) extruded from magma, flows into the ocean? Now for the first time with the technology and brawn of the JOIDES Resolution we can obtain cores from deeper in the seafloor, thus on longer time scales than previously known. The 340 expedition is going back in geologic time to gather data about the long-term history of the volcano over the past million years. This task can only be accomplished through scientific ocean drilling. The data from Expedition 340 will help scientists around the world better understand the modern day events occurring in the Lesser Antilles island arc, in particular the potential for future hazards such as eruptions and tsunamis.

By retrieving ocean based cores we are sampling the geologic archive that lies beneath the seafloor.