A case for onshore outreach 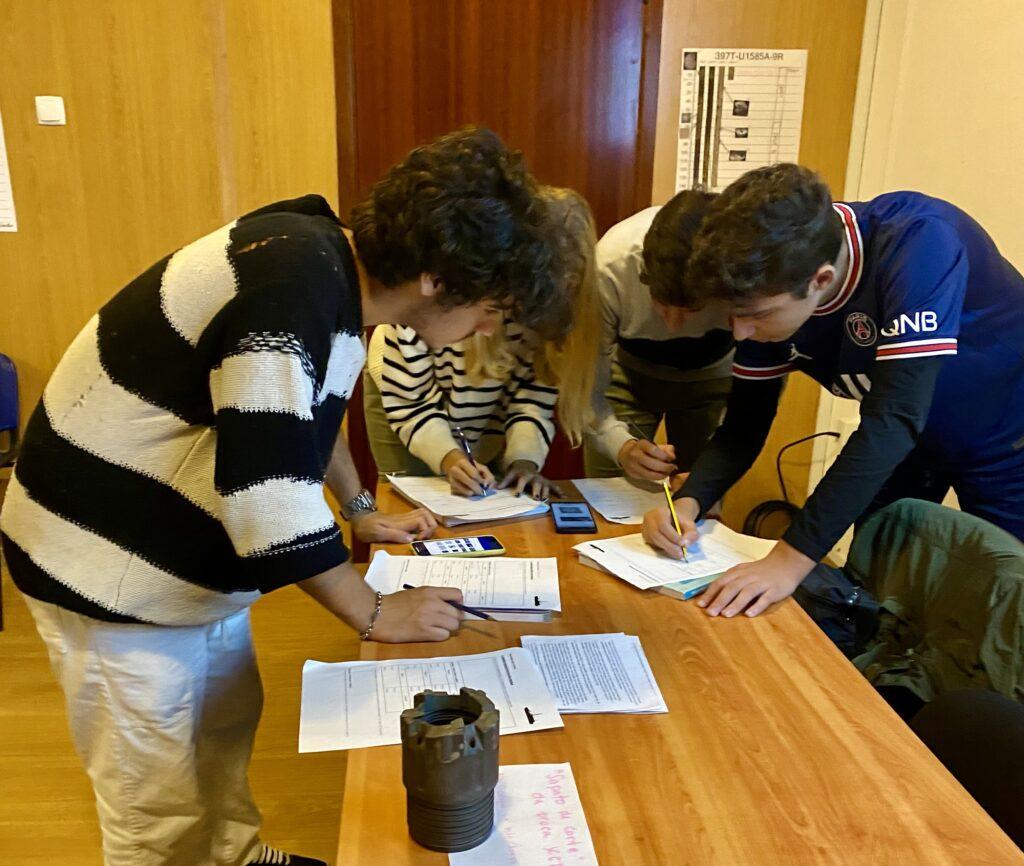 Students in Portugal work together to identify fossils in a core section and determine the ages of sedimentary layers [Maya Pincus / IODP].

Prior to being selected as the onshore outreach officer for Expedition 397, I worked as a high school Earth science teacher for seven years. In that time, I got pretty good at my job. I grounded my curriculum in hands-on activities that required my students to collaborate and problem-solve. I had strong relationships with many of my students, and some even said I was their favorite teacher. Every now and then I would get one of those “OHHHHHHH”s that told me a student suddenly and profoundly understood what they were trying to learn.

Despite these successes, every single year I would meet at least one student who told me “I just can’t do science” or “I’m sorry, but science just isn’t for me.” Even some of my most high-achieving students were convinced that they had no future in science.

It’s devastating that so many young people feel like they are incapable of scientific thought, or don’t fit into the field. From what they see in the media to what they are told in many of their classes, there are a number of signals that push our children away from science. Very few of them identify with the stereotype of an eccentric white man working alone in a laboratory for hours until that sudden “Aha!” moment. Stereotypes aside, many just prefer to pursue a line of study and a career where they see themselves reflected.

One of IODP’s major goals, as stated in the 2050 Framework for Scientific Ocean Drilling, is to provide “opportunities for a diverse population of early career scientists, graduate students, undergraduates, and educators to work alongside international teams of experienced scientists and engineers” because “communicating about the scientific process and sharing data and results from this international collaboration are essential for developing a scientifically literate global citizenry.” If we are going to meet that goal, we need to figure out how to empower our children to identify as scientists at a young age, so that they want to be part of that scientifically literate global citizenry of the future.

That’s where outreach comes in.

I’ve now had the opportunity to work as an IODP Education and Outreach Officer in a few contexts. First, in the standard role as the Onboard Outreach Officer for Expedition 391, and then as the short-term Onboard Outreach Officer for Expedition 397T, during which the JOIDES Resolution transited from Cape Town to Lisbon. As with my career in teaching high school, I think I was fairly successful at engaging students from the ship, energetically bringing them along on virtual tours and creatively illustrating life at sea through our social media pages.

But during those ship-to-shore broadcasts, I could always feel the distance between myself and the students. Even though we were talking in real time, what I was doing was still separate from their lives, and despite all my enthusiasm, I was still just a talking head on a screen. Though students were exposed to a new type of science, which was undeniably exciting, we were doing nothing to change the idea of “science as other” — we may have been sailing on a ship, but to many students we still fit the model of lonely scientists in a lab.

My third role in Education and Outreach was as the Onshore Outreach Officer for Expedition 397, which was a completely different experience. After disembarking from Expedition 397T, I stayed in Portugal to offer in-person outreach. In two weeks, I visited 10 schools, and interacted with more than one thousand students. I started each outreach event with a brief presentation about the International Ocean Discovery Program, the JOIDES Resolution, and Expedition 397. Then students participated in a series of activities designed to simulate various aspects of scientific ocean drilling. (Soon this aside will turn into a link where you can see these activities for yourself!)

After each presentation ended, students would flock to the stage to ask me questions. They wanted to know if I ever got lonely at sea, how hot the drill string would get due to friction as it rotated, why sediments changed color with depth, and even what happened to human waste on the ship. These are the sorts of questions that students never would have had a chance to think of if they weren’t in the same room as someone familiar with scientific ocean drilling. They certainly couldn’t be answered by someone without firsthand experience of the science that happens onboard a research ship like the JOIDES Resolution.

During several of my school visits, students requested to have their picture taken with me, as if I was a celebrity. At first, this felt strange to me and put my imposter syndrome on high alert, but then I realized that to these students I was a celebrity. How many of them had ever had the opportunity to meet a real scientist before? To be in the same room as someone who had sailed on multiple ocean expeditions, who looked and talked like them, who would be thrilled to answer their questions about poop?

For young learners, the opportunity to see and speak with a professional, to be heard by that professional, brought science into their lives in a way that a typical classroom experience never could. I left every school with a feeling of connectedness that was unlike anything I had ever experienced while leading broadcasts from the JOIDES Resolution, or even in my own classroom during my daily science lessons. From surveys filled out by teachers after my visits, I know that the feeling was mutual.

If we want students to grow up to be scientists, we need them to feel like they belong in science now. The best way to do this is to bring real science into their lives in creative ways.

For more information about how you and your students can get involved in IODP science in real time, visit our GET INVOLVED! page.