Election results from the Expedition 397 “What’s your favorite ocean?” survey
A case for onshore outreach 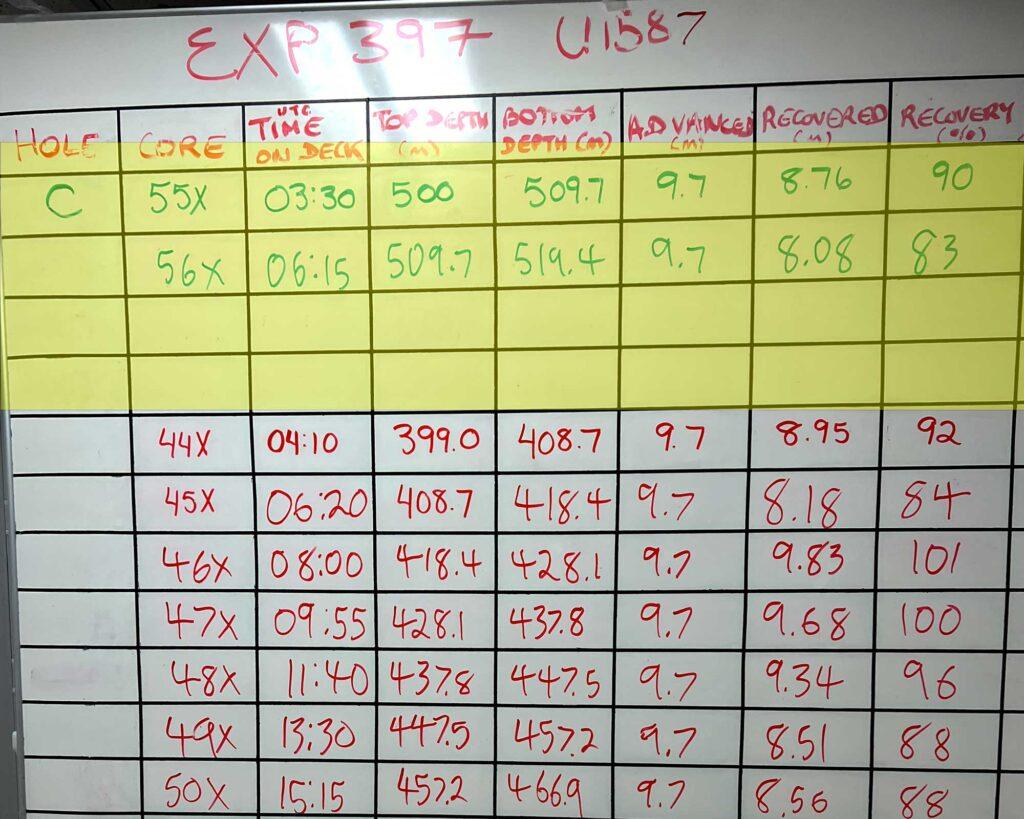 A white board in the core lab provides a quick reference to the depth the most recent cores came from. This photo was taken during recovery of the last few cores of Hole C at site U1587, where the scientists got permission to go deeper than the 500 meters approved prior to the expedition. (Photo: Amy Mayer)

Even the most informed and carefully scrutinized plans are, ultimately, only a speculation about what might happen. The lead-up to Expedition 397 included a site survey cruise that took seismic data, which later was analyzed and interpreted to help Fátima Abrantes and David Hodell, the co-chief scientists, refine their choice of where to drill. One of the scientific goals of the expedition is to extend climate models that currently stretch back 1.5 million years to as much as 3 to 5 million years ago, so they needed places where they were likely to pull up sediment at least 3 million years old.

They also had to get their sites approved by safety and regulatory agencies and, thanks to a number of undersea communications cables, even some representatives for private companies. Eventually, they were able to define the exact coordinates where the ship would stop to drill. The drilling plan that got approved called for up to five holes at each of four sites, with maximum depth ranging from 350 to 500 meters. That was all settled before the expedition science party boarded the ship. No one onboard had the authority to override those depths.

Nearing 500-meters at the second site, the scientists found they’d recovered mud that corresponded to the Messinian Salinity Crisis. This was a point in Earth’s history, around 6 to 5.33 million years ago, when water flow between the Atlantic Ocean and the Mediterranean Sea was stopped, or at least much reduced.

The interplay of tectonic activity, which caused the uplift of the Gibraltar seaway, and lower sea level led to reduced water exchange, Abrantes says. There was no longer regular communication between the Atlantic Ocean and the Mediterranean Sea and salt beds formed in the cut-off Mediterranean.

The science party realized that if they were able to go just a little bit further back in time – drill a little deeper – they might have a better chance to capture a full picture.

“What we wanted to do was to have a chance to check what the (climatic and oceanographic) situation was before, during and after,” she says. That would give them a continuous record of the conditions on the Atlantic side that would help them better understand the reasons behind the event.

While they knew about the salinity crisis, they hadn’t accounted for it in their plans because they weren’t expecting to reach it. (The seismic data projections proved to be underestimates.) Now, though, they saw an irresistible opportunity. Abrantes, Hodell and the IODP expedition project manager, Carlos Alvarez Zarikian, submitted a request to the IODP Environmental Protection and Safety Panel seeking permission to extend the drilling to 550 meters at just this one site.

“The main scientific reason was good and the conditions, the information we had on the site, was also good,” Abrantes says. They submitted the request on a Sunday and by Monday afternoon they heard back: permission was granted. Since drilling operations had been waiting on weather, as soon as drilling resumed everyone knew they’d been approved to go to up to 50 meters deeper.

A couple of meters short of that new endpoint, though, the scientists made another change of plans: they’d gone deep enough.

“We had two cores of Tortonian – that’s the name of the geological period right before the salinity crisis occurred,” Abrantes says. There was no need to send the core barrel down again for the last two meters. She says the biostratigraphers assured her the time of the start of the Messinian Salinity Crisis was now encapsulated in cores on the ship. She’s enthusiastic about what that means for understanding this time in the region’s, and ocean’s, history. “It opens new opportunities of research for everybody that is on the expedition,” she says, “and, of course, to everyone else who might want to do work on this material from now on.”

The expedition hasn’t even started drilling the third location and already the scientists are revising their research plans and goals and forming interdisciplinary teams to tackle the enormous volume of material they’re collecting.

“The amount of sediment that is out there already – it’s enough for many, many PhD theses,” Abrantes says. And it could nearly double before Expedition 397 reaches port.