What’s in a name?

A case for onshore outreach
Voices of Expedition 397, Part 1 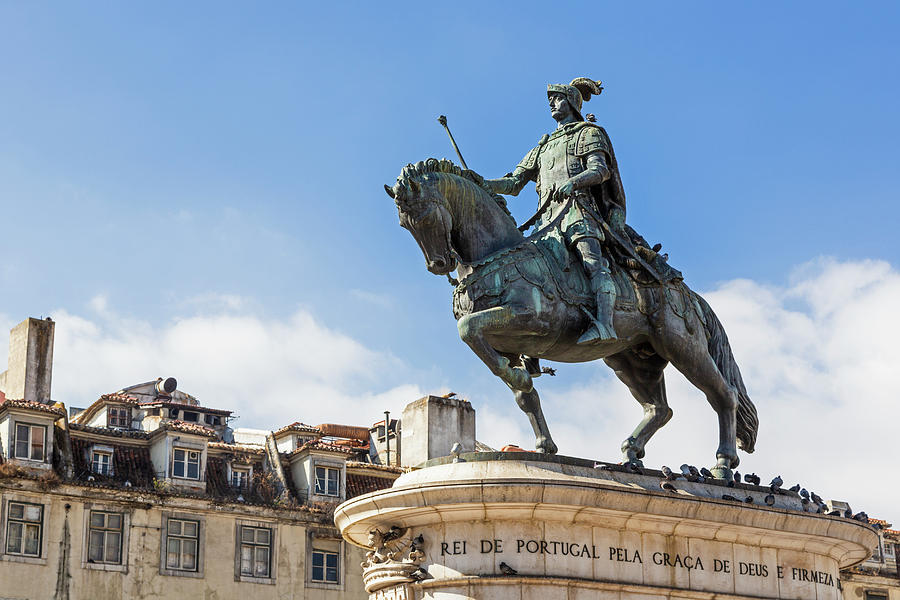 This post was written with contributions from Onboard Outreach Officer Amy Mayer and Co-Chief Scientist Dr. Fátima Abrantes. Fátima grew up in Angola when it was a Portuguese colony, then emigrated to Portugal as a refugee when Portuguese rule dissolved and the nation fell into civil war.

Featured image: A statue of Dom João I in Lisbon, Portugal [Ken Walsh]

A special bit of seafloor

If you’re familiar with Expedition 397, you know that the drilling is taking place in an area known as the Promontório dos Principes de Avis. The Promontório is a part of the seafloor south-southwest of Lisbon that’s ideal for the objectives of Expedition 397 because narrow valleys flank each side of an undersea hill. That morphology – the shape and structure of the landscape – allows sediments to accumulate 10 times faster than in other parts of the ocean. Expedition 397 scientists will collect core samples to translate this detailed sedimentary record into a high-resolution archive of Earth’s climate for the past three to five million years. There may be no other place in the world’s oceans that can provide such comprehensive scientific information about Earth’s past.

So far, we’ve put a lot of effort into understanding the geologic significance of this location, but little conversation has been dedicated to its name. I was curious about the history. Who were these princes the place is named for and what did they do to earn this deep sea designation?

What’s in a name?

The Portuguese Príncipes de Avis translates to “Princes of Aviz,” which refers to the family that ruled Portugal from 1385 to 1580. This family took control of the country after a succession crisis – the last king of the previously ruling bloodline died with no male heir, leaving the issue of who would succeed him up for debate.

The history is rife with all the details you would expect if you ever watched Game of Thrones, but we’ll make this long story of distrust, war, and a bastard son short: the crown was eventually claimed by a man named Don João, Mestro de Ordem de Avis, known as Dom João I. Over the next two centuries, eight more kings ruled Portugal in the name of the House of Aviz.

History tells us that the Aviz family was widely admired by their constituents. They are known to be cultured and well-educated, and they are honored for their great contributions to cultural and scientific developments in Portugal. Some go so far as to consider their reign the start of what we now call globalization.

What I would like to be my favorite part of this story is that the Aviz family ruled Portugal during a time that is known as the Age of Discovery. What better way to honor an ocean drilling expedition than through the name of people known for exploration and for pushing the bounds of modern knowledge? My research was seemingly guiding me to a beautiful reflection of past and present: the International Ocean Discovery Program returned to a site honoring the Age of Discovery to uncover more about Earth’s past.

As someone with no brain for remembering historical details, I was excited by the coincidence that felt so serendipitous. As a scientist and educator, I couldn’t stop without learning more about the time period.

I was quick to discover my naïveté. The Age of Discovery is synonymous with the Age of Exploration, a time from the 15th century to the 17th century during which Europeans were loading up their boats and setting sail around the world to see what they could find. We in the USA know this story, which is so familiar during Thanksgiving season: they traveled the world, conquering existing communities and colonizing their lands.

The House of Aviz was no exception. In fact, João I began the country’s five-centuries-long history of aggressive colonization. From 1415 to 1999, Portugal claimed territory in Africa, North America, South America, and Asia. While the Portuguese regarded this time as a period of ever-growing wealth and improved quality of life, colonized nations experienced violence, human trafficking, and forced labor.

Coincidentally, in 1999, the same year that Portugal finally surrendered its last territory, Macau, the General Bathymetric Chart of the Oceans (GEBCO) Sub-Committee on Undersea Feature Names (SCUFN) considered and approved an area of elevated seafloor off the coast of Lisbon to be named the Príncipes de Avis Hills and the Príncipes de Avis Terrace.

According to the report created by the 13th meeting of the GEBCO SCUFN, these names were proposed by Ingénieur Général André Rouberto, who at the time was the Chief Editor of the International Bathymetric Chart of the Central Eastern Atlantic. I wasn’t able to find more information about this person during my research, but I imagine their intention was to honor Portugal by naming the undersea feature after important figures in Portuguese history, a family renowned for their diverse accomplishments.

This may have been all well and good in 1999, but in 2022 the necessary habit of analyzing all sides of history has expanded from academia to many walks of life. For those of us with privilege, it’s easy to dismiss the wrongs of the past as relics of a different time, but the consequences linger. As recently as 1974, Portuguese troops in Africa were responsible for the deaths of over 100,000 people as they began to withdraw. While Angola and Mozambique both gained independence from Portugal, the countries descended into civil war following the hasty retreat after centuries of colonial rule. In Asia, when the Portuguese left East Timor, Indonesia took advantage of the suddenly weakened government and invaded, leading to fighting that claimed another 100,000 lives.

A time for reflection

I’m writing this post from my Brooklyn apartment, located on land that was stolen from the Native Americans who called themselves the Lenape. You may be reading this and rolling your eyes, wondering if there’s anywhere on the internet that’s still a safe haven from social justice warriors whining about the injustices of the past, but it’s vital that we all acknowledge that the echoes of the past are still reverberating in the present.

When I started my research into the Promontório for this post, I had no idea the story was going to take me in this direction, but as I learned the history I couldn’t leave it unsaid. We can’t erase the past, nor should we. But at the same time, we shouldn’t choose to honor those who perpetrated the conquest of native peoples.

As we look toward a future of more discoveries, we can choose to celebrate the fact that Portugal is now participating in global exploration as one equal member of a multinational team. While the primary goal of the International Ocean Discovery Program is to drill into the ocean floor for the advancement of scientific knowledge, we are equally committed to using our platform as a means to increase diversity and amplify underrepresented voices in the scientific community. So now, when we invoke the Príncipes de Avis, let it be as a reminder that the role of scientific achievement is to make the world better for everyone, and should never come as a detriment to anyone.