Packing for life at sea
10 things I learned about Barbados 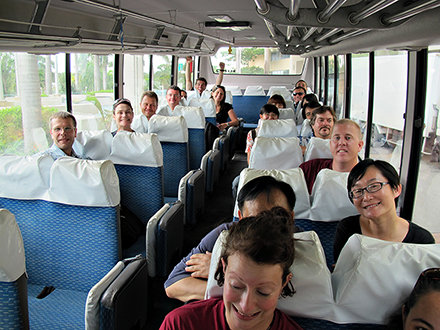 Last night, I met many of the people from the expedition science party and ship operations. We all just magically gathered in the lobby of the hotel: “Are you, by any chance, sailing on the JOIDES Resolution? Oh, good! Me, too!”
And for one night, we were just people. We were Wolfgang, and Tania, and Heath; Michael, Vicki, Joe. Today, we boarded a bus to the ship and emerged as the co-chief scientist, or the documentary director, or inorganic geochemist, or microbiologist or operations manager; but for that one night we were able to have a bite to eat and just chat about France, or football or travel, as new friends with a common goal. Right now we don’t know who will be on which shift, or who will be working next to us in the lab, but one thing is certain…we will all be spending the next 60 days getting to know each other better. And last night was a good start!
EXP336
17
Sep 2011
By Jennifer MagnussonUncategorizedLeave a comment