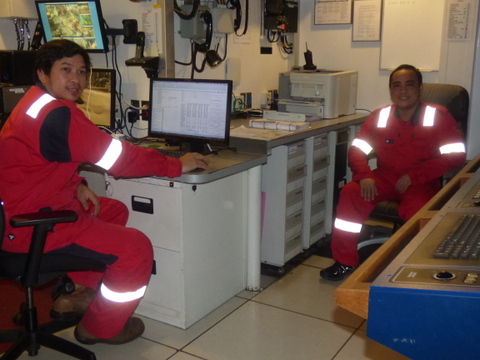 One year after I graduated from college, I went to work for the National Oceanic and Atmospheric Administration (NOAA) and spent my first two years at sea as a navigational officer on a couple of research ships.  I now use my past experience as a teaching tool in my physics classroom when teaching vectors.  Back then we had to use grease pencils on the radar screen to figure out another ship’s true heading and direction in order to have a way of identifying it when we radioed.  Now there are not only automatic identification systems on every ship, but they pop up with distance, speed and heading on both the radar and the electronic chart (another nifty addition since my seafaring days).  However, paper charts are still used as well, bridge controls still look much the same, and azimuths are still taken daily.

The bridge crew here consists of the Captain, Jake, Edmond, Frankie and Pete.  When we are on station at a drilling site, it is the DP room (Dynamic Positioning) behind the bridge that is even more important.  Steve C. and Rico, along with Edmond and Frankie, control the ship’s 5 engines and 13 thrusters from the DP room and keep the ship within a 20m radius of the hole, even in some pretty severe conditions.  Most of the controls are automated, but humans and their advanced training are always necessary to override errant decisions made by the system.

I mentioned before that the deck department also supports the bridge, offering relief during meal times and such.  This is possible because many of the deckhands also graduated from the Maritime Academy, same as the bridge crew, and plan on working as mates when they can, but there are only 3 mates positions whereas there are 6 deck positions.

I’ve been trying to get the bridge (and deck) crew to tell me some good sea stories – my colleagues on the NOAA ships could tell tales for hours on end.  From epic battles with tuna (there’s no fishing off this ship for fear of the lines getting tangled in any one of the 15 props) to long distance behavior modification of their children (only have well behaved, well adjusted children among this crew), the stories kept coming so you wouldn’t fall asleep on watch.  These guys never fall asleep, yet it took days to get a sea story out of them.  Apparently on one expedition there was a blue marlin trying to make a meal out of a baby dolphin, but the parents kept chasing it away.  The blue marlin was persistent, so at one point the entire pod of adult dolphins attacked it, so it turned and swam away at full speed.  Unfortunately, it turned towards the ship, rammed it at full speed, broke its sword-like nose and died – suicide by ship.  But the dolphin lived!