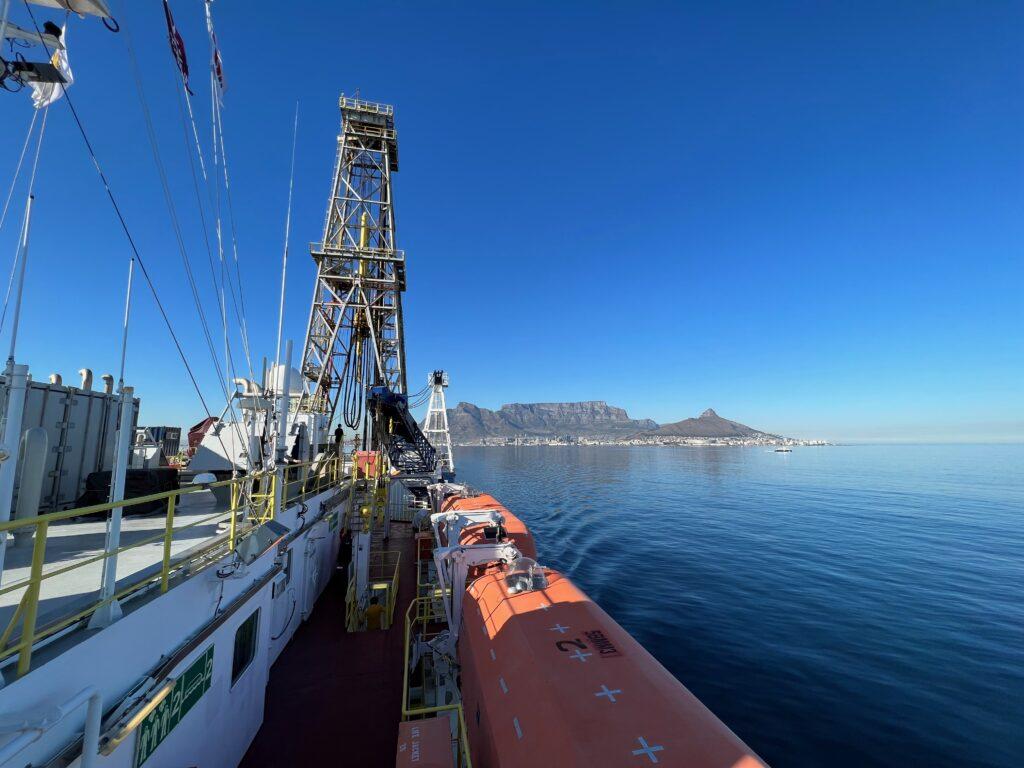 H.M.S. Challenger departed Portsmouth, England in 1872, on what is documented as the first dedicated oceanographic research expedition, crossing the ocean for 1,000 days and sailing more than 68,000 nautical miles. In 1873, Challenger made its fourth crossing of the Atlantic Ocean, sailing from Brazil towards Cape Town, South Africa. The Challenger scientists and crew stopped at Tristan da Cunha along the way, encountering their first modern penguins and penguin rookeries of the expedition.

Our time at sea has differed in many ways from the time Challenger spent on the water (although, we did see penguins in the water as we sailed away). We departed 12 April and are returning to Cape Town, spending roughly 54 days on the water and sailing more than 4,000 nautical miles. None of the Challenger naturalists were trained in geology (Macdougall, 2019, p. 83), but JOIDES Resolution (JR) is filled with scientists and science technicians with backgrounds that include geology, geophysics, and oceanography.

Our research mission was focused and required continuous coring of sediment and rock material in the South Atlantic, whereas Challenger set out to collect whatever samples they came across from the sea and land, “to gather as many examples as possible of every plant, every animal, every rock and mineral from the seafloor, and then examine, describe, and catalogue them” (Macdougall, 2019, p. 202).

Across the three sites we visited on the JR, we recovered ~700 meters of core and performed descriptions of and analyses on the sediments and basement material – with more analyses to come. It took roughly 10 years and 50 volumes to publish the findings from the Challenger expedition in the Challenger Report. We will be focused on wrapping up our findings in 5 years.

But both ships are similar in their quest to collect samples to advance our knowledge of Planet Earth, especially our ocean system. The dissemination from both expeditions includes sharing results with scientists and non-scientists alike, ensuring that the general public is also exposed to science at sea and why it is important in everyone’s lives (see blog posts Communications from the sea – before personal Wi-Fi and The science communications from H.M.S. Challenger were “Good Words” and more). Each ship was/is being led by a dedicated captain – Captain George Nares for Challenger, and Captain Jacob (Jake) Robinson for JOIDES Resolution.

H.M.S. Challenger spent several weeks in Cape Town while being outfitted for the next leg of its journey, heading into the Southern Ocean in mid-December 1873 (Macdougall, 2019, p. 111). JOIDES Resolution will be spending much less time in port, with the final group of Expedition 390 scientists and crew leaving the ship on 9 June. Immediately, the personnel for the second half of the South Atlantic Transect (Expedition 393) will board and prepare for departure. Cape Town has served as a port of call for these two scientific vessels and others, playing an important role in supporting science at sea.

Doug Macdougall (2019) wrote in his book Endless Novelties of Extraordinary Interest: The Voyage of H.M.S. Challenger and the Birth of Modern Oceanography the following:

The Challenger expedition was life-changing for its participants …. But the voyage had far-reaching consequences beyond the personal. …. In some ways the Challenger expedition simply built on and extended the work of its predecessors and prepared the way for those that followed. …. The expedition drew widespread attention even as it was under way, and at its conclusion “scientific men” from around the world wrote to congratulate Wyville Thomson and the entire crew for their accomplishments.”  —  Macdougall (2019, p. 230)

For those participating on JOIDES Resolution Expedition 390, you will find agreement that our two months on the South Atlantic Ocean have been a life-changing experience for some, personally and/or professionally. We’ve had the unique opportunity to work alongside scientists, technicians and crew from across the globe to seek answers to the objectives laid out for our expedition – and to develop even more questions for further research. Our work may not draw the attention in the public press as did the adventures of the Challenger scientists, but we know our science and education/outreach efforts are going to continue to impact future research at sea and expand the ocean literacy of our audiences.