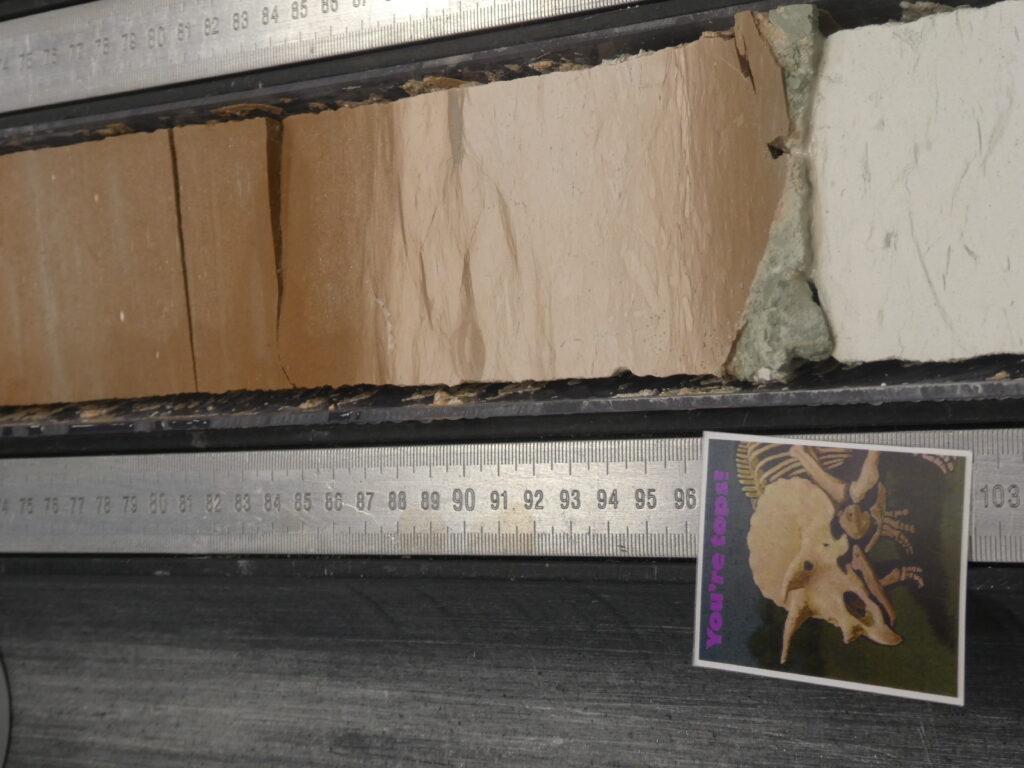 We reached the location of our first drill site on Saturday, February 12. There, the first thing was to “trip pipe,” which means to lower the drill pipes down to the seafloor. In the course of this, the pipes had to be cleaned and “de-rusted.” The seafloor here is 2,500 meters deep. The whole action took a few hours.

After those preparations, drilling could commence. We expected that sediment close to the seafloor would be soft, so used an Advanced Piston Corer (APC). Using high pressure, a 10-meter- long core is pushed into the subsurface—not unlike a cookie cutter being pressed into dough. The core is then retrieved and cut into one-and-a-half-meter-long pieces, for easy handling in the lab. The sections are allowed to warm up to room temperature and then measured using a number of parameters. Those will later help to interpret the material.

Last but not least, the cores are split, photographed, again measured, described and sampled. 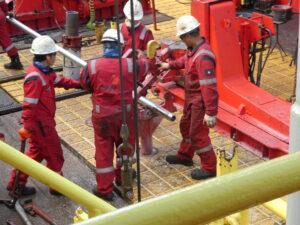 The APC (cookie-cutter) method only works in soft sediment. We soon learned that the Agulhas Plateau sediments require Rotary Drilling. Using this method, we drilled down to more than 700 meters below seafloor. We were lucky enough to sample the Cretaceous-Paleogene boundary. This interval captures the moment when, 66 million years ago, a huge meteorite made impact on Mexico’s Yucatan Peninsula. Enormous amounts of dust were catapulted into Earth’s atmosphere, the sun was dimmed, temperatures decreased significantly . . . and the dinosaurs became extinct.

This is a very important interval in Earth history since it heralded the change from the Cretaceous hothouse to the Cenozoic icehouse. Globally, there are very few archives of this interval. Our cores will provide further information and allow the reconstruction of the both the event and climate change accompanying it.

Our drilling continued, and we reached basaltic basement in about 700 meters below seafloor – the fundament of the plateau!

Main photo shows the Cretaceous-Paleogene boundary, with lots of calcareous, white foraminifers below, and very few above, thus brown.