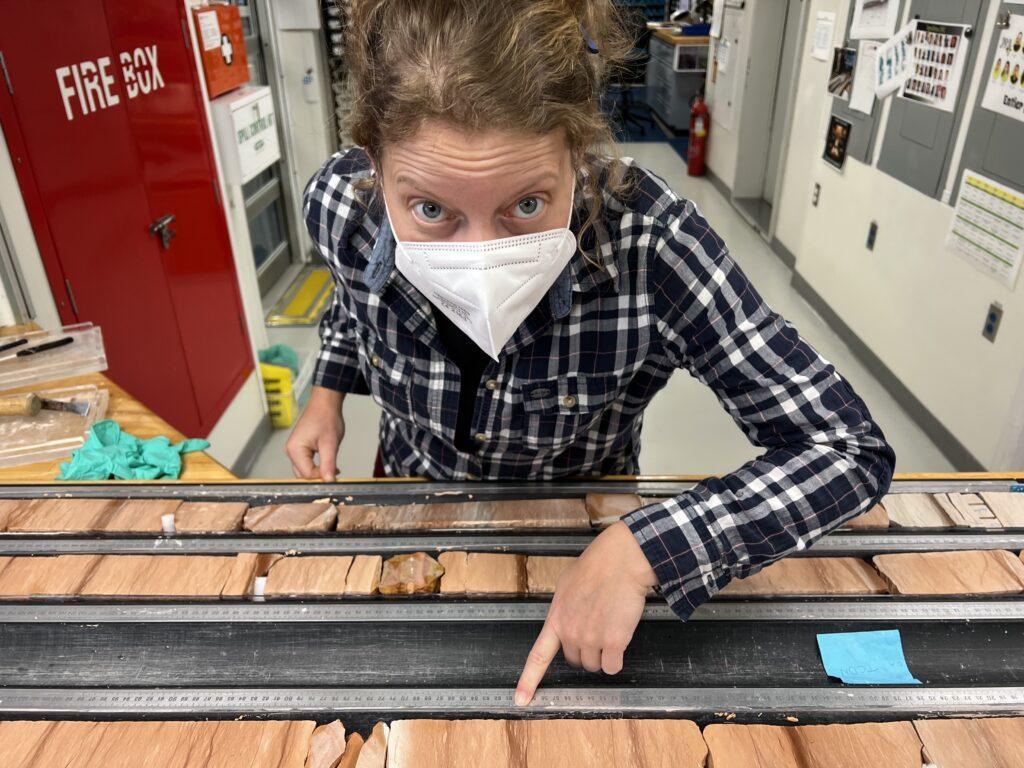 Following my 12-hour shift and a quick workout on the elliptical machine in the JR’s gym, I am more than ready to climb into my bunk on the upper tween deck.

But invariably, just when I’m pulling the blackout curtain around me, I feel pulled . . . compelled by the darkness to slip on a fleece and my steel-toes, and head outside to the uppermost deck.

When skies are clear—especially when the JR is in transit between sites and the glaring activity on the drill floor is muted—I meet my old friend Orion, so high in the sky here in this hemisphere. If I’m lucky, I see a new acquaintance—the iconic Southern Cross, which thrills me no end. We never cross paths where I live in the northeastern U.S.

Being pulled by stars and planets is not unusual, and quite understandable if you happen to chat with Sietske Batenburg, a physical properties specialist and stratigraphic correlator on Expedition 392.

A case in point is the core nicknamed by sedimentologist Don Penman as “the Cretaceous candy cane.” Recovered from our first drill site, the core has distinct, dark reddish bands that occur around every 20 centimeters or so.

Its pattern is rhythmic. And revelatory. 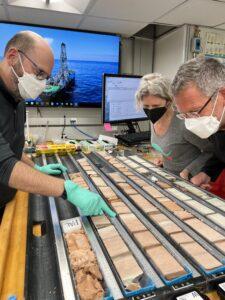 This sediment core is especially sweet because it dates to the Campanian stage of the Cretaceous period, a time when the overall hot greenhouse conditions of Earth were gradually cooling.

“We have few sediments available from then,” Sietske says, explaining that Campanian samples are not often recovered by deep sea drilling, and there’s not that much of it exposed on land.

Which makes this marine mud—with its rhythmic expression of an enigmatic age—nothing less than a treasure.

The dark bands, occurring as they do with regularity, lead Sietske and others to think about what could be at play here: that is, a mechanism of the Earth’s climate referred to as orbital forcing, or astronomical forcing.

This candy cane-like core shows in real time the influence of variations in the Earth’s orbit on paleoclimate.

Sietske explained this phenomenon so elegantly that I now can do the same for you: Changes in the shape of our planet’s orbit, the tilt of its axis, and the direction in which the axis is pointing all control how much energy we receive from the sun at a given place and time. These factors can change the seasonality—the hotness of our summers and coldness of our winters—which in turn influences climate and sedimentation. These three types of astronomic mechanisms cause rhythmic sedimentary patterns that no one from the science party can resist admiring when they are on display on the core description table. 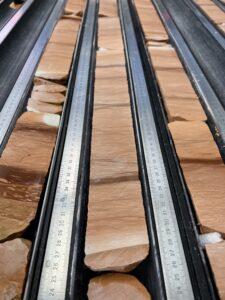 Sietske is excited about the prospect of linking sedimentary patterns to climatic variations, and ultimately obtaining age records corresponding to the fact that it takes 20,000 years for the Earth to go from pointing at North Star to Vega, and then back again to the North Star. Our striped sediment, some 70-plus million years old and recovered from 500 meters under the sea floor, stands to shed new light on the connection between paleoclimate and our planet’s place in a universe where we are a spinning top, wobbling at the whim of other celestial bodies’ gravitational pull.

“Going into the Campanian, we’re pushing the limits of what we know about Earth’s climate response to changes in the orbit,” Sietske says.

to my knees in gratitude