LIVE Aboard the JR: Week 2
The Science Week 1: Lesser Antilles 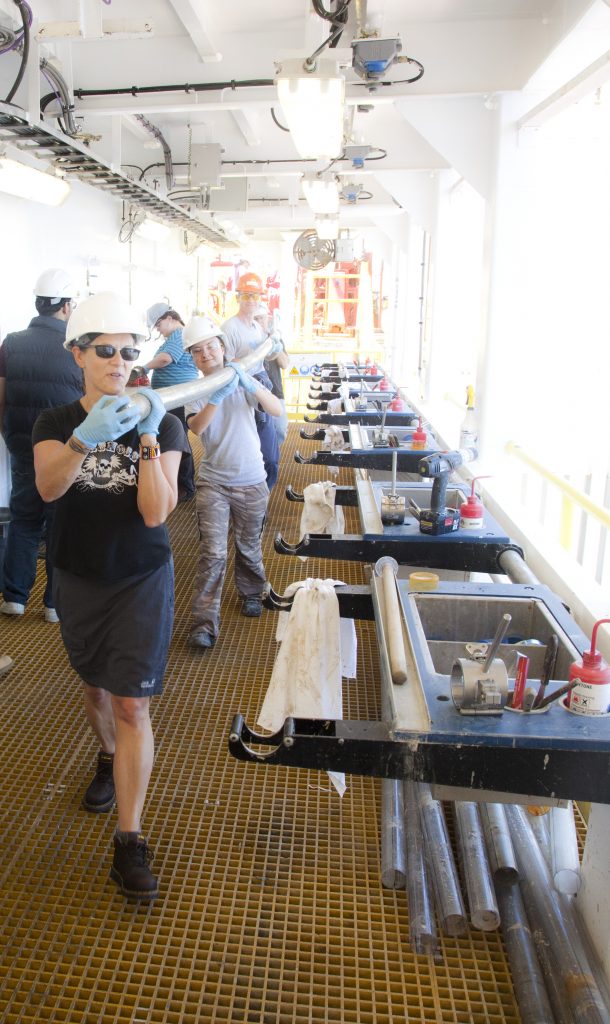 These are a scientist’s favorite words when aboard the JR. These are the words that tell us that a sample of the seafloor is on deck ready to be received and processed. First, a team of specially trained and talented technical staff process the sample. A 9.5 meter long core of ocean sediment and rock are transferred from the drilling floor to the catwalk.  Each core is cut into smaller more manageable lengths of 1.5 meters and assigned a unique. Teaser and two below photo credit, Etienne Claassen, 340 Marine Instrumentation Specialist

Before the 9.5 meter core is cut into smaller 1.5 meter sections, two things happen: the contents of the core catcher are collected by the micropaleontologists (study the very small fossils preserved in sediments; marine protists such as forams, coccolithophores), and the sample is tested for gas content (hydrocarbons and hydrogen sulfide).

After the whole cores are analyzed, then the core sections are split in half in the Core Splitting Lab. One half is used by the scientists who process the split core in a variety of ways (much more on this later), while the other core half undergoes a visual core description (VCD), is cataloged and stored as an archive sample. Below photo credit, Anne Le Friant, 340 Co-Chief scientist.

These archived cores are not sent to a museum but rather theGulf Coast Repository housed at Texas A&M University, which stores samples from the Caribbean, Gulf and East Pacific. This is one of three repositories for IODP samples; the other two locations are Germany if samples were collected in the Atlantic Ocean and Japan if samples were collected in the Western Pacific. Stay tuned as we continue from the catwalk or core receiving area to the Core Lab where the activity continues 24/7 to describe, analyze, sample and sort the scientists half of the core.