EXP359. JOIDES Resolution: Night and Day / the record of this first day (and night!) Of drilling. 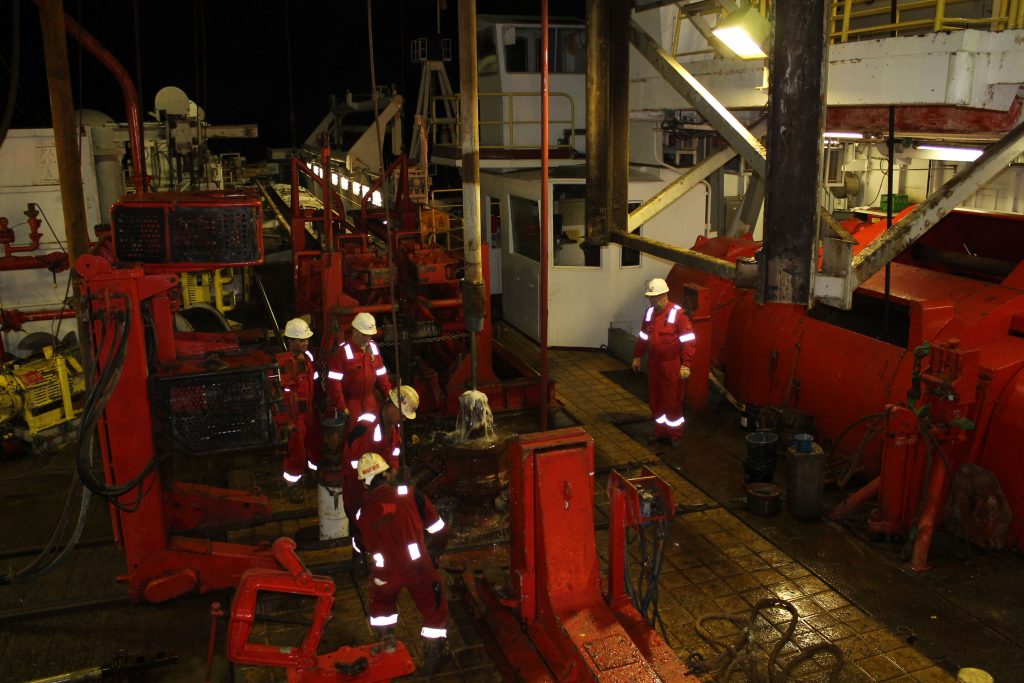 Arrived at 4:18 am, the thrusters   and hydrophones were lowered and the JOIDES
was put in dynamic positioning, (ie it is able to cushion in a way the
forces that could do it Too much movement). The depth
from the drilling rig
was 514.4m. The 1 st drill pipe recovery has brought back that
water. The drill “head”
was lowered by 9m and a second drill pipe was reassembled with water and
sand in the “head” of
the drill pipe.

After the drilling head was positioned at 523.4 mbrf (meter below
sea level), drilling resulted in
more than 7 m of sampling. Then the hole was still drilled to almost 70m. At midnight the whole
sample was a little more than 50 m consisting largely of
grainstone material up to the rudstone type (thanks SVT teachers :-)) with a
predominance of skeletal debris from
planktonic foraminifera And a
smaller amount of Pteropoda (a group of organisms such as snail and
pelagic sea slugs – ie, which move freely in water), Echinoderms (
group of sea stars and sea urchins)
Briozoa (marine or freshwater invertebrates that may resemble sponges), green algae and benthic foraminifera. The
biostratigraphy of planktonic foraminifers finally revealed an age of about 3.7 Ma
at the base of the sampling.

Everything was not simple for this first day and the nerves were put to strain but always in good humor!

Arrived at   the first site at
04: 18am, JOIDES was switched to dynamic positioning. The thrusters and
the hydrophones were lowered. The first “core on deck” gave us
just a water core. The second one gives a small sample of sandy
material in the cutting shoe. For the third time the position has been at
523.4 mbrf and the core barrel has been deployed
recovering for this time a little bit more than 7m.

By midnight the total core recovered was a little bit more than50m. The
cores consisted of grainstone to rudstone with skeletal pieces of planktic
Foraminifera (Protists with external carbonate shell), With Some structures from pteropods ( free-swimming pelagic sea snails and sea slugs) Echinoderms (the group of the well-known starfish), bryozoans (Invertebrate animals), Halimeda (genus of green algae) and benthic foraminifera.