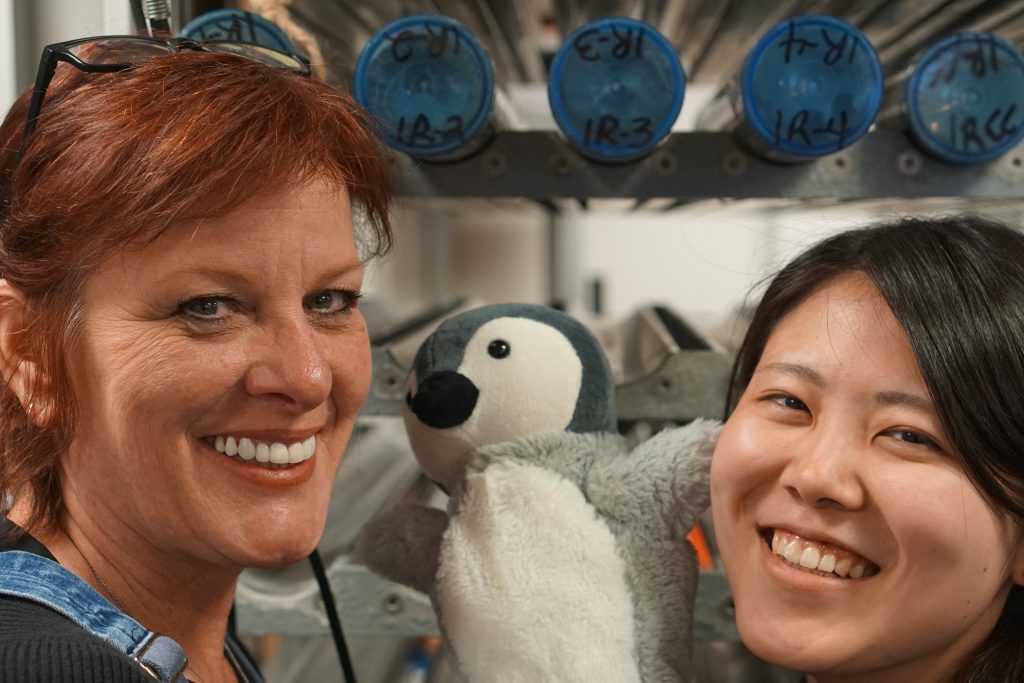 We made it to our first drill site! Because we are drilling about 500 metres (that’s 1,600 ft) and the water depth where we are drilling is about 550 metres, we will need more than 1 kilometre of drill pipe to reach our target depth we want to drill to! It takes a few hours to get the drill string down to the seafloor to begin coring. After that, 9.6 metre (or 31 ft) sections of cores begin coming up every 40 minutes or so. The core is brought on deck, we let it sit for about 4 hours so it can acclimate to ship temperature. Then the scientists begin their work, looking at the sediment in every which way to squeeze out all the knowledge we can from these precious clues about our earth’s history. It is exciting to finally start work on the cores; it marks the beginning of an endeavor that has been decades in the making for some. And the beginning of collecting data that will be the basis for decades of future research; masters and Ph.D. theses may be crafted around what is recovered on this expedition. And reaching our first drill site marks the end of our 8 day transit.

It was a very intense atmosphere on the core deck as we waited. Finally, at about dinnertime, we had the first core arrive. All the scientists immediately moved into action to begin figuring out what the core was made of and how old it was.

One of the first tests to be down is called a “headspace gas analysis” to check for hydrocarbons such as methane gas. The JOIDES Resolution is unlike other drilling ships because it’s not looking for oil or gas. Oil and gas, which have a lower density than surrounding rocks, want to rise upward – think of cartoons of oil wells with oil coming out of the top! Since the JR is not equipped to stop them rising, she cannot drill in areas where oil and gas are present (including large quantities of methane produced by organisms such as microbes). Before every expedition, a safety panel of experts reviews all site locations and can reject sites if there are any risks. Then, during the expedition, the first thing the geochemistry team does is take a sample of the core, heat it to expel the gas trapped inside, and run the gas through a gas chromatograph to determine the amount of methane or other hydrocarbons present. They continue to monitor this for each core and can stop the drilling if it appears we are reaching an unsafe amount. We don’t anticipate any hydrocarbons during this expedition, and, just as predicted, at our first site there is only a small amount of methane present! This methane forms from decomposing plankton within the sediment and it’s a sign that there was intense biological activity in the Ross sea during past warm periods of time.

The micropaleontologist’s first concern was what kind of microfossils they would find inside the core. Knowing what kind of micro-organisms were around will help these scientists find out how old the mud is, and can also help figure out what kind of conditions must have existed to support life in Antarctic waters at that time.

Now that we’re drilling, everyone’s working around the clock to reveal the secrets of all the cores coming up. The scientists have found glacial tills, tiny fossils, water full of isotopes and they’re putting together all the clues as you read!