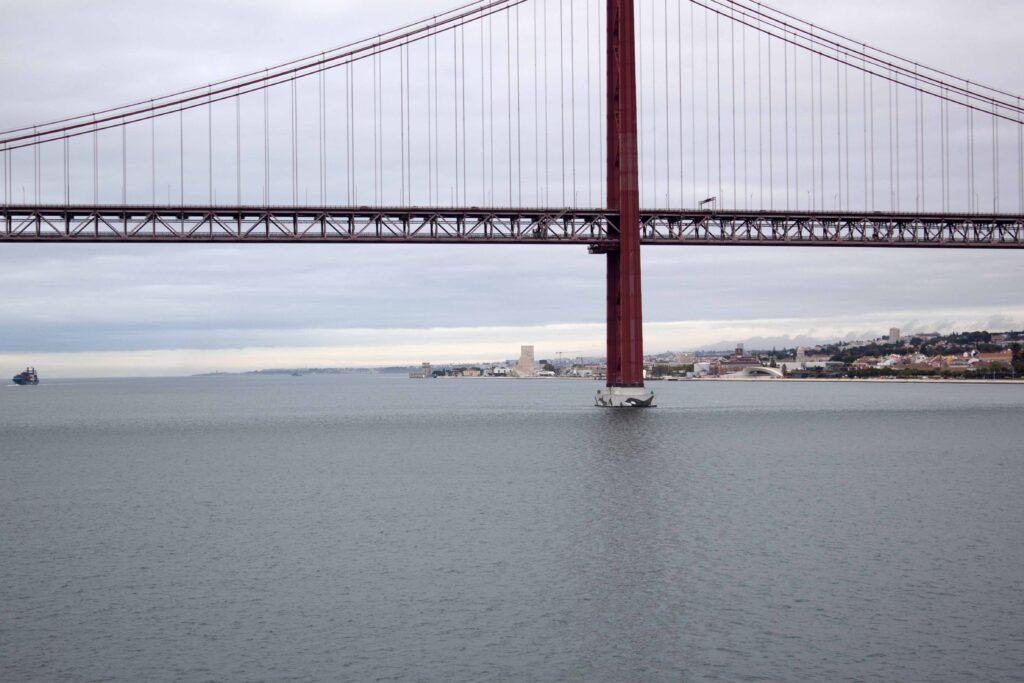 No matter where they live or where they were arriving from, everyone onboard Expedition 397 – the scientists, technicians, ship’s crew, drilling team, cooks and stewards, all 119 people – had to spend several days in quarantine in Lisbon (with COVID testing) before boarding the ship. Then, once we were all brought to the ship, assigned our berths and given our work stations (and ongoing COVID tests), we continued to admire Lisbon from oh-so-close. For another three days, we were on the ship and tied up to the dock, unable to visit any part of this (apparently) beautiful European capital. Even the Lisbon residents in the expedition party had to quarantine at the hotel.

Then, on Sunday Oct. 17, a week (or so) after most of us left home, the following sequence of events set us on our way:

And with that, we sailed off under the 25 of April Bridge, past the Monument to the Discoveries and the Tower of Belém, and onward to our first site.

By Sunday evening, we had reached the spot on the Iberian Margin known to long-time North Atlantic paleoclimate scientist as SHACK 11B, and officially to IODP as U1586A. The drill operators got to work activating the thrusters that hold the ship in place during drilling. Then they began sending pipe down through the ship, into the water and eventually into the sediment we came for.

And that is how we found ourselves at mid-day Monday anticipating the very first core of Expedition 397.

Because the ship runs 24/7 the scientists are divided into a “night” crew that comes on at midnight and works until noon and a “day” crew that starts at noon. With the noon crossover time coinciding with the expected arrival of the first core, almost the entire science party put on their hard hats and safety glasses and gathered near the catwalk to witness the first core’s arrival. (The catwalk is a few steps below the drill floor and just outside the core lab.)

A member of the drill crew at last made the announcement they’d all been waiting for: “Ladies and gentlemen, we have core on deck. Core on deck.”

Quickly less euphoric murmurings erupted on the catwalk… “water core,” one of the technicians said. The first section pulled up contained “only water, no mud,” as one scientist put it plainly.

Much of the night shift headed to bed at that point – they’d enjoyed the first birthday of the cruise (yes, there was cake) and the anticlimax of a water core. Though a touch disappointing for some first-time seafarers, the co-chiefs were not surprised.

About 90 minutes later, a day-shift scientist from the chem lab held the tools for grabbing a sample for gas measurements. Another stood at the ready with the dishpan to collect the whole rounds – these are small chunks of core cut between each section (for now, later there may be fewer) that allow the geochemists to squeeze out water and study it; what’s left is called a “squeezecake” and can be used for other analyses later).

When the next “Core on deck” call came, the day crew technicians filed out onto the catwalk in a hard-hatted line. Both of the co-chiefs were there, again, and marveled at the careful choreography that transforms the 9+ meter-long core into the 1 to 1.5 meter-long sections that will, forever after, be associated with IODP Exp. 397.

This time, there was mud: the sediment these researchers have been looking forward to seeing for months, years… even decades. The work is now underway, with fresh core coming up every hour or so.