What to do while we’re WOW-ing 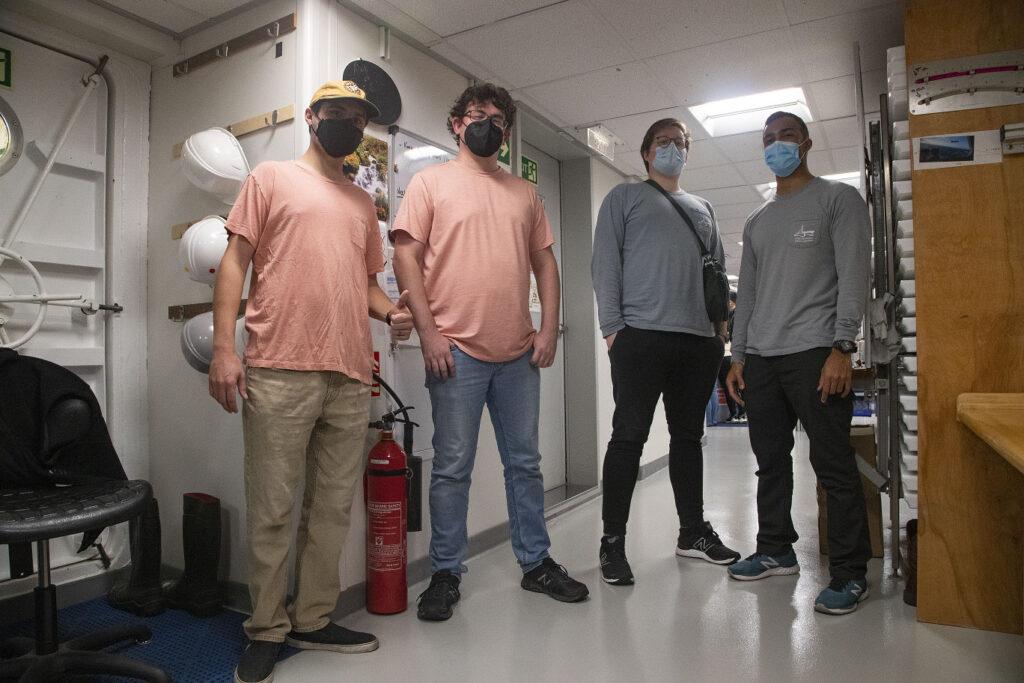 Sound asleep a few minutes before my alarm was set to go off, a somewhat large swell jerked me awake as it sent my hard hat flying off the top of the metal locker where it’s stored. It crashed to the floor of my cabin at the same time as a drawer under the bed – also metal, and only unlocked because I hadn’t been able to get it open – slammed out as though begging me to fill it.

These swells, or heaves, hardly constitute extreme weather, though they came with some rain and for a day and a half or so they’ve affected how steadily we walk around. Plus, once we finished drilling the first hole at this site, the drill crew decided not to start a new hole until the seas calmed a bit. It’s important to get the drill bit in straight and steady at the start of a new hole. It’s also necessary to know how deep the water is. While the drillers could have brought up sediment, it wouldn’t have been useful because the swells caused too much variation in the starting water depth. Weather that might allow for safely continuing to drill can prevent fresh, new drilling from making sense.

That’s how we found ourselves waiting on weather, or WOW-ing. And while it interrupts the flow of things, WOW-ing also breaks up the relentlessness of constant core flow, giving the science party an unexpected pocket of time.

A brand-new scanning electron microscope is on board in the micropaleontology lab. So, a training on that instrument took place. An SEM can magnify something tens of thousands of times. This allows the researchers to get photos that show intricate details of their samples. (For more about SEM, Carleton College has this great page.)

Elsewhere, the paleomagician (who maybe would prefer the word “paleomagnetist,” but how could I resist working in magician?) still had many so-called p-cubes to put through his machine. The paleomagnetism is measured twice, once across an entire core section. Then, specific points where the sediment is undisturbed are found in the working half of the core and a square-shaped chunk of it is plucked out. Cube data in combination with data from the full length of the section ensures the most accurate account possible of the geomagnetic polarity of the time when the sediments formed.

The night shift of sedimentologists didn’t have a designated person with expertise in smear slides, which they make with a tiny bit of sediment from each core section. The slides help them zero in on characteristics such as grain size or mineral content. One person rose to the task first, but WOW-ing allowed another to, as she put it, “calibrate myself” to the microscope and see whether that’s a role she could rotate into.

Some groups used the time to process samples or to run tests on their machines. This expedition likely will see the pace of core recovery increase at the next sites, so the scientists already are thinking about what might need to change so they don’t wind up overwhelmed and unable to do everything they’ve planned. They might, for example, continue to do all of the analyses but not at as frequent of an interval as they started – put another way, they may decide to lower the resolution of some of their measurements from, say every 10cm to every 50cm.

Something they can’t neglect is their writing obligations. Every lab group will contribute to a site report at each of our stops. These reports are the first draft of what eventually will become an expedition report. The completed expedition report draft is supposed to be ready when we dock in Spain, which will be just three days after the last cores come on deck.

Still, with the abrupt end to core flow and an unexpected break, there were others who got some down time and logged into their work back home or even opened up a novel. And IODP imaging specialist Sandra Herrmann caught two sets of tech twins roaming the labs — in the lead photo of this post you see what may appear to be the cover art for a new band, but is actually Dan Marone (assistant lab officer) twinning accidentally with Carel Lewis (curator) while marine lab specialist Daniel Rudbäck found himself all matchy-matchy from mask to sneakers with thin section lab specialist Aidan Leetz.

Since I haven’t introduced myself, let me use the last of our WOW time to tell you that I’m the Exp. 397 onboard outreach officer. I’ve been a journalist for a long time, with an interest in science writing going back to my years in Alaska. I got to board the JR for the first time in 2011 for a short trip from Panama City through the canal and into the Caribbean port of Curaçao. I’m very excited to see a full expedition unfold, and I’m happy to have you along.

For many more photos from this cruise, be sure to check out our Friends and Family photo gallery, which will have new additions each week.