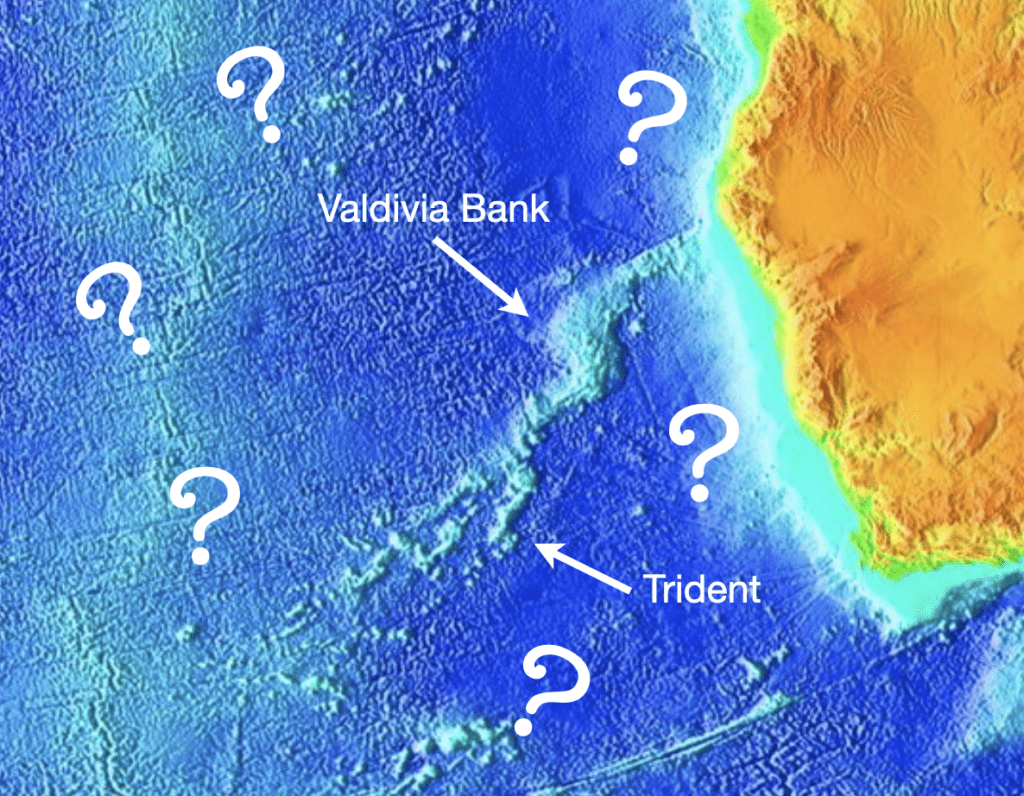 If you’ve spent any time looking at satellite images of Earth (for example, Google Maps), you probably noticed that the oceans are dotted with what appears to be lines of islands and underwater mountains. These geological features, known as hotspot tracks, are beautifully exemplified by the islands of Hawaii and the Louisville Ridge. Referred to as “string-of-pearl” hotspots track by Expedition 391 co-chief scientists Dr. Kaj Hoernle and Dr. Will Sager, these chains of ocean volcanoes show a very clear pattern that matches nicely with how scientists understand hotspots to form.

We live on Earth’s crust, the outermost layer. Below our feet, about 30 and 70 km down on land, lies the upper mantle (also called the asthenosphere). Scientists refer to the texture of this layer as “plastic” because even though it’s technically solid, it has the ability to flow. Though there is still a lot we DON’T know about Earth’s interior, observations of how earthquake waves travel through the mantle make it clear that the layer is quite heterogeneous. Some regions of the mantle are much warmer than the rest, making them less dense and more buoyant. These hot, buoyant regions of mantle material, known as mantle plumes, rise up until they reach the base of the crust, where they cause melting and therefore the formation of a volcano. Over time, the tectonic plate located above the mantle plume moves, carrying the original volcano away and allowing a new, younger volcano to form in its place. Over tens of millions of years, a chain of “age-progressive” volcanoes is produced: the farther you go from the location of the mantle plume, the older the volcanoes get.

Now, let’s take a look at the Walvis Ridge. It can’t be any more different than those string of pearl hotspot tracks… So what’s going on? To the northeast, you see that very wide underwater plateau. That’s called the Valdivia Bank. To the southwest, the seamounts branch into three distinct tracks, which we refer to colloquially as the Trident. Even the most basic visual inspection shows us that something strange is going on here. Thus begins our mystery: the HOTSPOT WHODUNNIT!

Even the most novice detective knows that the first step to solving a mystery is to start with the clues you already have. First, some nomenclature. The band of elevated sea floor that we are investigating is called the Walvis Ridge.

The hotspot involved in its formation is the Tristan-Gough hotspot, named for two volcanic islands in the southern Atlantic ocean. As you can see below, the Tristan da Cunha islands are located at the end of one prong of the Trident, and Gough island is located at the end of another. Just invoking the names of these islands brings us to our first question: If the islands are so far apart, and located on different prongs of the Trident, can we really say that there is only one hotspot? What if there are two, or even three mantle plumes responsible for this complex bathymetry?

That brings us to our second clue, some of the data that we do have. Given that this hotspot is so unusual (in fact, Dr. Hoernle refers to it as one of “the most complicated hotspot tracks on Earth”), we are by no means the first group of scientists trying to figure out what’s going on.

Earlier you read about how one sure-fire indicator of a conventional hotspot is the progression of increasing age with distance from the hotspot. When plotted on a graph, that would show the data lined up, with a clear relationship between age and distance from the active volcano. Here’s what Walvis Ridge data give us: not one, but two lines on the age-distance plot. Could this be the fingerprint pointing toward a two-plume explanation? Let’s see what the rest of the evidence suggests.

Another way that scientists learn about rocks is through something called geochemistry. This is a very broad term that means analyzing the chemical compositions of the rocks and the minerals that comprise them.

One application of geochemistry is determining the ages of rocks like we just talked about. Another way that geochemistry can help us here is that it can indicate if rocks found in different locations share a history. If two samples show similar geochemical signatures, it is possible to infer that they came from the same source.

Take this graph for example. On the axes we have ratios of different isotopes of the element lead (Pb). Isotopes are versions of the same element that have different amounts of neutrons, and therefore different atomic masses (as you follow along with our expedition, you’ll learn about many different things scientists can learn from isotopes). When the data are sorted this way, we can see that there are two distinct groups of points, which conveniently correspond to samples from the Tristan track and the Gough track respectively. This is could be the trace DNA evidence linking multiple mantle plumes to our volcanic islands.

With this information, we are hot on the case of figuring out the culprit of who formed Walvis Ridge and how they did it. But before we can conclude it was a two-plume mantle source interacting with a mid-ocean ridge (a la “It was Professor Plum in the Library with the Lead Pipe!”), we still need a few more clues.

Up to this point, we’ve only talked about the two outer prongs of the Trident. But what about the middle prong? Scientists have already found that it has a different geochemical signature than either the Tristan or the Gough track. Does this mean there is a third mantle plume as its source? Is there some sort of mixing between other two plumes tracking place before they reach the crust?

Don’t forget that the Trident is not the only strange thing about the Walvis Ridge… Why is Valdivia Bank such an abnormally broad oceanic plateau? Was it formed by the same mantle plume(s) that formed the Trident? What other processes were involved?

And the most important question of this mystery: How can we use what we learn about this unique hotspot track to better understand mantle processes and formation of new crust in general?

So we can see, this is a true HOTSPOT WHODUNNIT! Follow along with the detectives of Expedition 391 as they drill into the ocean floor to collect the clues they need to crack the case.