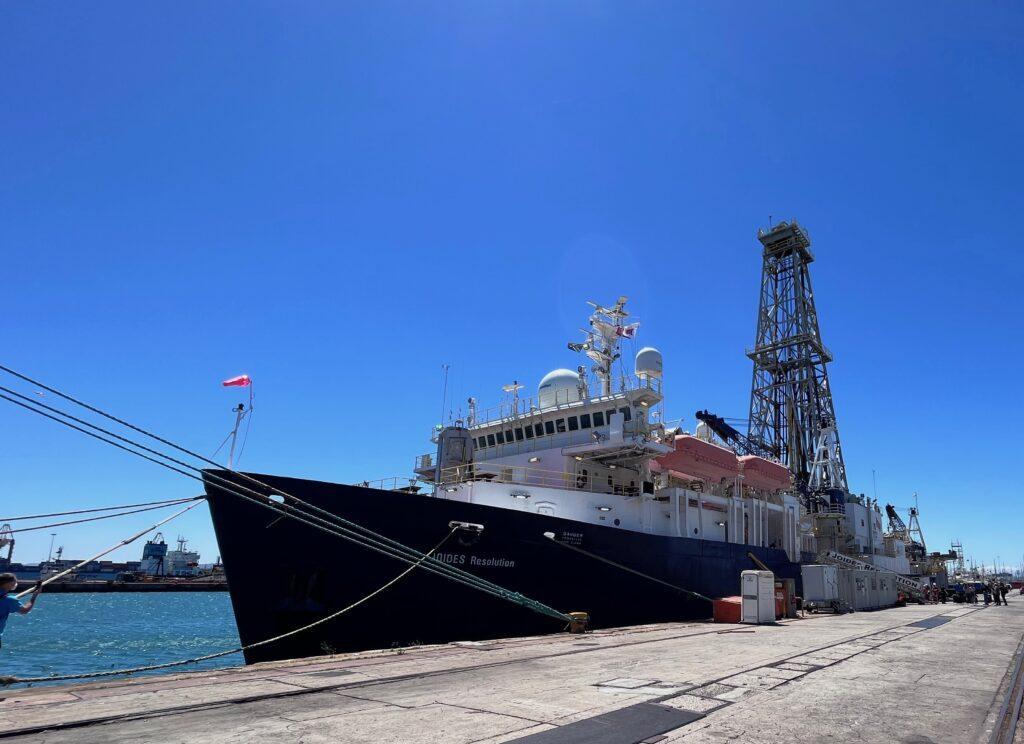 This post was written by JR scientist Ethan Petrou. Ethan is currently in the fourth year of his PhD program at Oxford University. He is the graduate student body president for University College Oxford. In his spare time he sings baritone in the college chapel choir and enjoys traveling around the world. This is an excerpt from his daily journal “Sixty Days at Sea.”

Brilliant! It’s finally arrived, the day of boarding onto the vessel. The day that all the past seven days of isolation have been building to. I wake at seven, after a restless night, to the grey dawn light streaming through the open window and have a last breakfast of blueberries and granola. Poetically, I sit on my window sill ledge where I spent the majority of the hotel lockdown, gazing at the view that has become so familiar to me as the blueberries stain my fingers a deep hue. Then, after a final sweep of the room and a last parting look I open my door and step into the dim corridor. It’s a surreal experience walking through the manicured halls and taking the lift down to ground level, like some remnant memory of ages past. After so long being cooped up in one space my world had reduced to those four walls and now it’s finally expanding again and oh how glorious does it feel to walk in a straight line again and stretch my legs. I arrive in the lobby and as I check-out the mini-bus pulls up ready to whisk me away to a bigger, better science future.

Ten minutes through the busy streets of Cape Town we enter the docks. Large containers shipping an array of items are scattered everywhere like lego blocks discarded by their owner. Amongst the containers, cranes, tow-cars, car parks, long cables and their spools are alive with activity. We pull up to the only building in the area and I hand my passport to the immigration team there. With a nod of the head and a bon voyage, he stamps my passport and I’ve technically now left South Africa and am a nomad of the seas. It’s starting to feel real now.

I bundle back in the bus and we shuttle to the quay side. Small white fishing boats, tug boats and survey vessels are bobbing in port next to us as we skirt by immense ships of all nationality and purpose. You can hear the alarms sounding off their sides and almost make out the people scuttling along in their overalls and hard hats, climbing up ladders and walking across deck to complete their morning tasks. Between the boats the water glimmers in the early morn light, my first look at the surf that will be home for the next two months. The sea shanties were correct in how true is the deep blue. I’ve certainly arrived in the land of water and rusted metal.

We turn a corner and there she is. The JOIDES Resolution in all her glory, tied up by the quay side. A hunk of dark blue metal trimmed with white borders and steel staircases painted yellow. On the back of the boat the helipad can be seen but what is most striking about the boat is the tall derrick protruding out the middle of the boat, looming above all else. Seagulls circle around its crown and more can be seen swooping down from the safety railings to dart into the water in order to pinch up the krill that dared to travel to the surface. I look to the vessel again with new resolve and head to the harbor master in front of the ship to check-in with him. He radios up to the boat and through the patchy static I get clearance to board! I take my final few steps on land and position myself at the bottom of the gangway. Looking up, with my feet firmly planted on the ground, I appreciate the stability of dry land and take a moment here. Courage don’t desert me now with the start of my life at sea. Nerves and excitement overcome me and I take the steps up onto the gangway, getting faster with each rise, and eventually enter the open door at the side of the ship without a final glance back to shore.