Let’s do that again – but faster!

Making microfossils massive for the masses
Election results from the Expedition 397 “What’s your favorite ocean?” survey 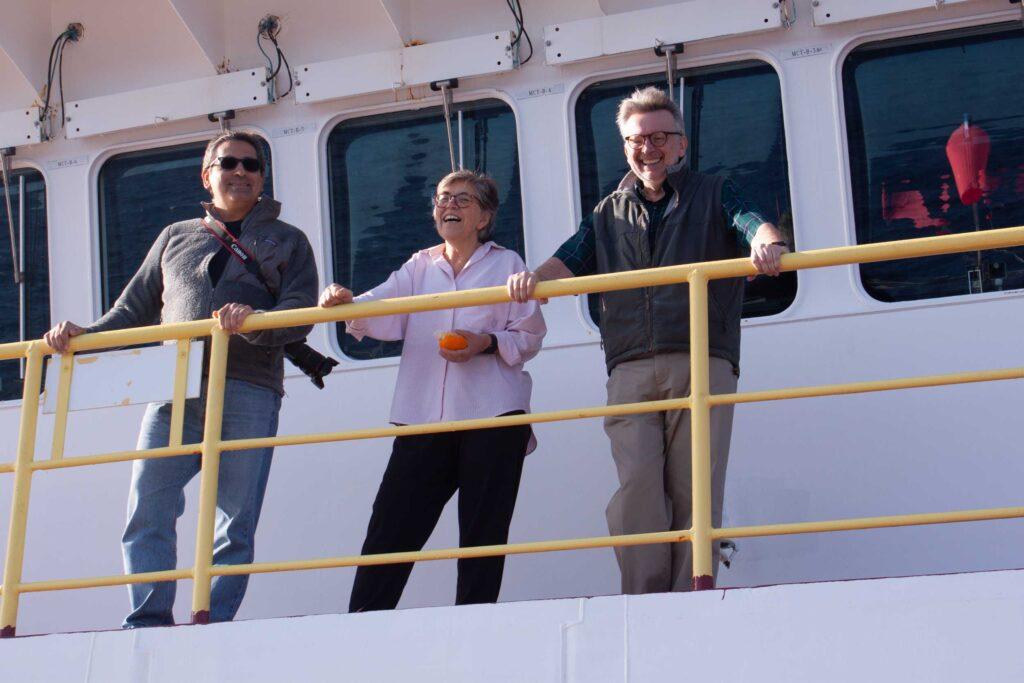 Expedition 397 has arrived at the second site, which in IODP lore is officially called U1587. From the deck of the ship looking out at the ocean, the view is… essentially unchanged from the first stop. But the ocean here is about 1000 meters shallower, which means the whole operation of drilling into the sediment and pulling up cores goes faster. That presents the opportunity to drill even deeper. The goal here is to drill 500 meters into the sediment below the seafloor, and to do that in four successive holes.

At our last site, we pulled up sediment from about 350 meters below the seafloor and it proved to be much older than the carefully calculated estimates created with seismic data. The expedition science goals include extending existing paleoclimate records from about 1.5 million years ago to perhaps 3-5 million years ago, but the team now has mud that may date to about 14 million years ago, or possibly even older (it will take additional shore-based studies to refine the age estimate).

Put in geologic terms, they hoped to drill into the Pliocene and maybe reach the Miocene, but they found themselves in the mid-Miocene.

Now at the second site, the operations will be quite similar but the cores will come on deck a lot faster, perhaps as often as every 45 minutes to an hour, compared to every hour to 1.5 hours at our old home, U1586. The actual time to get the core liner filled up with sediment once it’s in the hole is similar, but in shallower water there’s less transit time between the seafloor and the ship.

While at the first site, each lab group worked to refine their methodologies and get themselves into a smoothly operating routine. In anticipation of getting cores at this new, faster pace, some teams spent the short period between sites strategizing for efficiency. The sedimentologists who describe the cores have worked together enough now to have agreements on exactly when to use certain specific terms — something that at first required gathering together for discussions and finding consensus. They’ve also defined how to estimate percentages of different characteristics. For example, their descriptions will say how much of a section is “clay” or “nannofossil ooze.” And they’ve reached agreements about when a core section can be described as a unit versus when it needs to be described in more detail.

Anticipating that the cores’ appearance and make-up will not diverge hugely from the ones at the last site, the team is feeling pretty confident they can describe faster this time to keep up with the pace. Plus, they don’t expect to make any more changes to their templates, which was necessary earlier and also costly in time.

The paleomagnetists conduct two types of analyses. One is a scan of each core section and the other involves taking cube-shaped samples and putting them through the same instrument. Each has its place. In the first hole of the first site, they took many cube samples. Now they know approximately where the expected reversals in polarity will be. Their plans for this site involve taking fewer cubes. They maintain the option to take additional cube samples at places where they expect reversals, if they want to and have time.

The geochemistry lab expects to be quite backed up for a while as this quicker pace of core recovery gets underway. But, their regimen of sampling and analyzing doesn’t have to happen for each of the holes. That means they have plenty of time to make their way through backed-up samples while cores are coming up at the second, third and fourth holes. The story is similar for the micropaleo team, which will be inundated with material at first and then will work through all the core catchers of the first hole as drilling continues.

Even if the new pace poses some challenges, enthusiasm remains high and the scientists have been buoyed by their successful recovery of more than 95% of the mud they aimed for at the first site. Lab groups have coalesced into strong teams and all systems are as ready as can be. By the time we get to the final site – where the water is about 1300 meters deep compared to around 3500 meters here – they should be prepared for a frenetic final few weeks of the expedition.