Making microfossils massive for the masses

What to do while we’re WOW-ing
Let’s do that again – but faster! 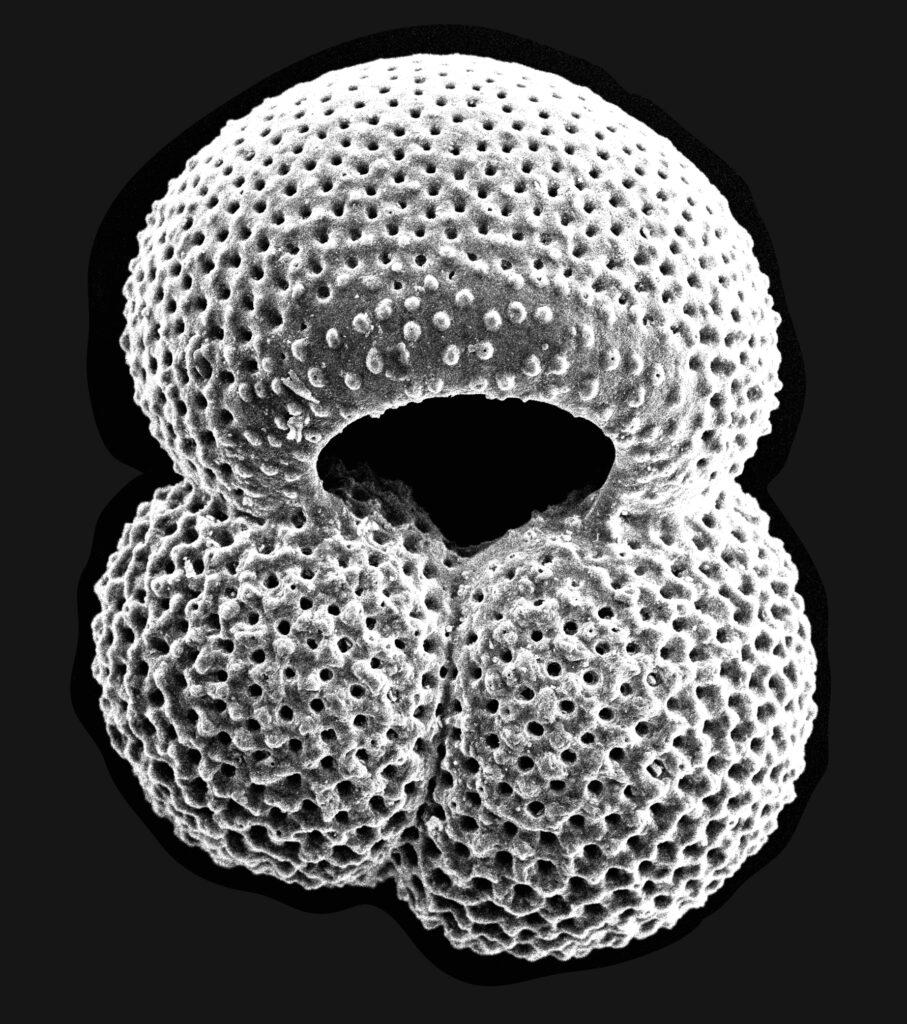 When I found out I’d be joining this expedition as the outreach officer, I explored the creative projects previous education and outreach staff had come up with, including patterns to make plush microfossils. I put out a call on social media over the summer to see if anyone would be willing to knit or crochet one for me. As their name implies, microfossils cannot (generally) be seen without magnification. But take an image of one and create something big enough to hold and now you’ve got an example to introduce to people who won’t be looking at microscope slides anytime soon.

One of my college friends produced this incredible Spumellariinid Hexacontium laevigatum, even though, as she noted, she had no idea what it was.

So let’s back up: what’s a radiolarian, or for that matter, what are microfossils? And, more specifically, how are they related to Expedition 397?

Cambridge University Press has this handy definition: “Microfossils are the tiny remains of bacteria, protists, fungi, animals, and plants.” It goes on to explain that “rock samples must be processed in certain ways to remove them and microscopes must be used to study them.” Foraminifera and radiolarian are examples of protists that can be identified in sediment cores onboard the JR. Diatoms are another single-celled organism – in this case, algae – that also settle to the bottom of the sea and eventually get buried by layers and layers of additional material.

The other crafty microfossil that reached me before I headed out to sea came from a diatomist who created her own pattern and executed it in fishing line so it would be transparent.

This intricately crocheted diatom separates, as they do for reproduction, and when open reveals the chloroplasts inside. Chloroplasts are the parts of the cell that allow it to photosynthesize.

On expeditions, the micropaleontology team looks for certain groups or species of microfossils to help characterize conditions at the time the sediment formed. Some species of foraminifera, for example, are most often found in warmer waters – including Globigerinoides Ruber, which, sadly, no one made for me. (For the record: I know how to knit and crochet and I am a disaster at both.)

The core catcher, which is at the end of the core barrel as the core liner is lowered, fills up with sediment from all the depths it passes through. For this reason, it contains a mixture that isn’t useful for many lab analyses. But it gives the micropaleo people a peak at all the microfossils in that core.

For the purposes of Expedition 397, the core catcher micropaleontology provides a time stamp, of sorts, giving the scientists a relatively quick look at how old that core’s contents are. The ubiquity of certain nannofossils in each core catcher gives the micropaleo team a wide time range, maybe 2 million years, for the age of the sediment. Then, they can take samples within each core section and refine the time estimate to within perhaps 100,000 or 200,000 years. The forever fossilized critters contribute important data!

Here on the Iberian margin, we don’t expect to find radiolarian and we don’t have a scientist with that specialty. Our co-chief, Fátima Abrantes, is a diatom expert. She’s hoping to see diatoms but so far there haven’t been any. She has asked everyone in the micropaleontology lab to be on the lookout and to let her know if they find some. Diatoms are less preserved in the North Atlantic sediments than they are in the Pacific or the polar regions. But, the science party is very interested in reconstructing ocean circulation at specific times in the past. The occurrence of diatoms could reveal the presence of silica-rich waters of southern origin – paleo Antarctic Bottom Water – in this location at past times.

While specific species or the quantity of microfossils found in sediment can provide important data, images taken through traditional microscopes or with the massive magnification of scanning electron microscopes have inspired many people.

In addition to the knitting and embroidery activities on our website, check out these diatom leggings, algae paintings, and even a sculpture park of foraminifera.