Return to the Toe!
Cores Galore and Calm Seas 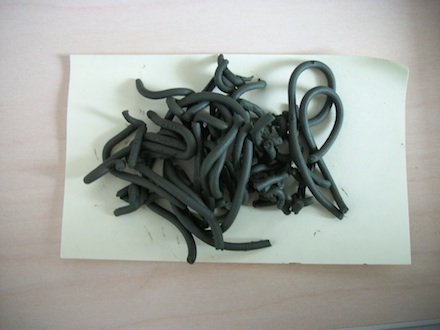 Worms? In the ocean?

Cores on Deck!  Currently, we are recovering core at a really fast rate! We are down to 116 meters below sea floor (mbsf) with great recovery.

The plan is to core down to the basement rock, which is the basaltic rock coming from the spreading center. Happy and busy scientists in the lab! The core has returned to sort of a monotonous greenish gray clayey mud that smells bad. Wahoo! There is a tiny shell bit in it! (or perhaps a large foram, I was informed).

One of the first cores they brought up this morning was under a great deal of pressure when it was down under all of that sediment.  When it was brought up to sea level on the ship, the gases inside the core started to expand. This pressure was released by the technicians poking holes in the clear plastic core casing.

Something interesting and somewhat entertaining happened…the muddy sediments started smooshing out of the holes they had poked, like squeezing toothpaste out of a tube.  It just kept coming out until it would drop to the ground.  It ended up looking like big piles of dark green spaghetti, or worms, piled under the core on the floor.

So, I have not gone crazy. Yet, anyway…in yesterday’s blog, I announced that I had seen the Green Flash at sunset, but not really quite believing my own eyes.  And since I was by myself on the Heli Deck, I had no one to corroborate my story. This morning, I told my office mate, Alyssa, the Publications Officer, that I thought I had seen it. She calmly announced that the Staff Scientist, Katerina Petronotis, had also seen it, as well as other people that were on the front decks. Yes! So, today, I went to the front decks to watch the sunset with everyone else, but, alas, no Green Flash.  Just a beautiful sunset.

From the oceanic plate!